King of the Taco World? 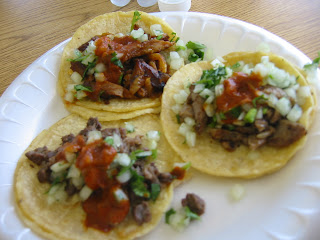 I finally tried King Taco and it didn't disappoint. I can't say it was the best I've ever had, but its al pastor version definitely got me hooked on this barbecued pork that is slightly charred on the edges with a slightly pinkish color.

King Taco is almost like a fast food chain, boasting 16 locations throughout Southern California. I realized when I went that I had much to learn about the humble taco. I had prided myself in being somewhat of a connoisseur of this Mexican classic. I fondly recalled the carne asada tacos I had during a road trip to Baja California where I drove all the way to La Paz over the course of several days, stopping by little known towns on the way such as Ciudad Constitucion and Guerrero Negro, and sampling different varieties of tacos in each city. The folks in these towns weren't used to people stopping by and it didn't take long for us to find a favorite taco stand in Ciudad Constitucion run by a very nice lady who made everything from scratch. Needless to say, we made sure to stop by her stand on the way back up to L.A.. 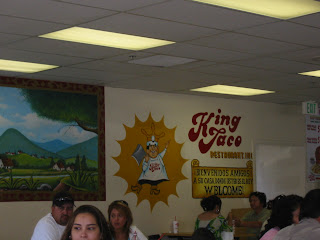 Back to King Taco. Upon entering, I saw a very long counter that divided the customer and the cooks/assemblers. After seeing the wide array of filling choices, I had to annoy the lady behind the counter by asking her gringa questions like, "What is buche, molleja, and suadero?" Just so you don't have to hold everyone up at the line, here's the lowdown.

Buche is pig's stomach. Molleja are sweetbreads, those thymus glands of veal, young beef, lamb and pork. I'm not sure which animal's sweetbreads King Taco uses, but I'm going to assume they use the pig's. Suadero is a thin cut of beef from the meat that hangs from the breast bone on a cow.

I tried the Suadero, which had an interesting texture that I didn't love. My favorite was al pastor, perhaps reflected in the photo above that focuses on the top left taco. The bottom left was the carne asada that was nothing to write home about. And the bottom right is the suadero, which I wouldn't get again. The combination of the meats, raw chopped onions and fresh cilantro topped with fiery red salsa was pretty good. You could also ask for salsa verde. 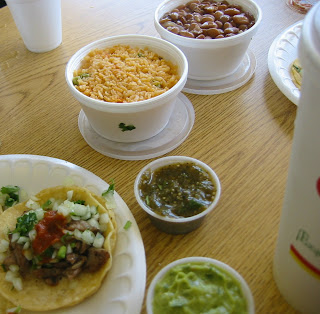 King Taco also offers carnitas (shredded pork), lengua (cow tongue), cabeza (cow head) and chicken. We also got rice, beans and guacamole on the side, all of which were decent but nothing special.

Factoid: I was surprised to find that King Taco owns El Taurino on Hoover and Olympic in Koreatown, which serves famed burritos with very spicy salsa that you want to make sure to get on the side. This is the joint that gets extremely crowded on weekend evenings, so much that they have a truck in the parking lot behind the actual restaurant that caters to late-night workers or club-crawlers until the wee hours.

Email ThisBlogThis!Share to TwitterShare to FacebookShare to Pinterest
Labels: Mexican 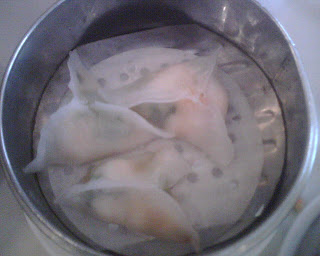 I've been in a quest for good dim sum ever since I moved here about five years ago, and sadly, I have yet to find that perfectly steamed har gow in razor thin rice paper filled with plump shrimps -- yes, the kind served in those huge, bustling halls in Hong Kong.

True, I haven't looked that hard and barely made it to a few San Gabriel Valley favorites, but none has impressed me so far. Lately I have motivated myself to trek out there on a regular basis to check out various dim sum joints, including Triumphal Palace recommended by a trusted source for all things Chinese and auto-related, and The Kitchen recommended by J. Gold. 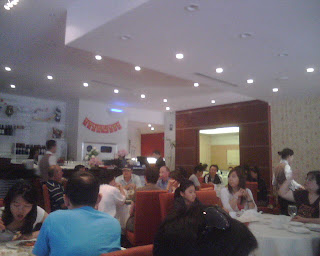 The first thing I liked about Triumphal Palace was the short wait and its manageable size. No throngs of large parties waiting outside for hours on end. This place doesn't do carts, and as much as I like to chase down the cart ladies while trying to understand what they describe is in the dim sum, no cart means it's all made to order -- hence, more fresh. 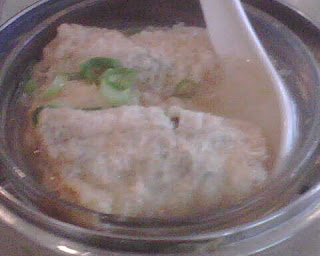 We ordered the usual suspects, such as shrimp dumpling, pea-tips and seafood dumpling, vegetarian dumpling, shanghai dumpling, BBQ pork buns and sticky rice in lotus leaf. They were acceptable, but the best was something new we tried, grandiosely called House Special Dumpling in Supreme Soup Stock. It is a deep-fried bean curd roll with a mix of carrots, bamboo shoots and green onions inside that comes in a surprisingly refreshing, clear broth (aka Supreme Stock). 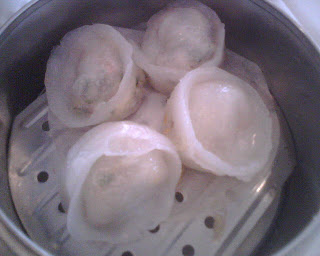 My second favorite was the pea-tips and seafood dumpling, mostly because I happen to like the combination of shrimp and greens and the shrimp was fresh. In the same vein, the basic har gow shrimp dumpling was good but not fantastic. The steamed baby broccoli provided some much-needed fiber. 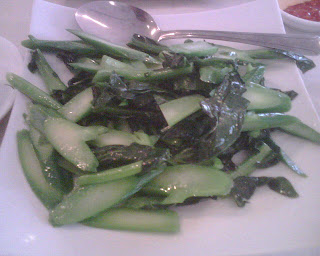 The shanghai dumplings were too dense and didn't have enough soup inside. There's a reason they are called soup dumplings. These didn't even give me the pleasure of poking a hole to let the hot steam out before biting into them. The BBQ pork buns were a bit too porky and fatty. I got the sense that the pork wasn't the best quality. 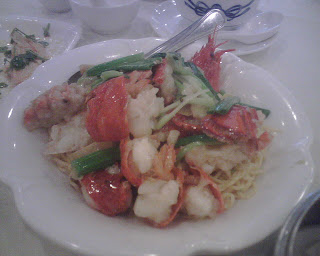 As for the Kitchen, it has some cart service but we mostly ordered off the menu. The only two standouts were the noodle dish with lobster that we ordered after our neighboring table started devouring its own; and the sweet green tea concoctions with red bean inside that I couldn't stop popping into my mouth.

The noodle dish seemed luxurious with its glistening lobster pieces in the shell and colorful vegetables sewn throughout the large plate. To be brutally honest, the dish looked better than it actually tasted, but that didn't stop me from deriving satisfaction whenever I scooped out a large piece of lobster meat from the shell. 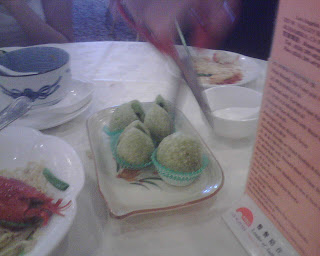 The green tea rice cakes tasted like they were deep fried or maybe baked, but were perfectly soft and addictively just sweet enough. I couldn't stop eating them despite having reached my capacity for the day. It made me forget about my favorite dessert at dim sum joints -- the mini-custard pies.

One thing I noticed about both these places is that service was unusually courteous and attentive. I wasn't sure whether to be sorry the dim sum experience had become less authentic or glad I was finally getting refills of my chrysanthemum tea without having to chase down the wait staff. Whatever you do, try to get there before noon to avoid a wait. I would probably try them out for their regular menus as well.

From Beirut with Love: Care for a Kefta? 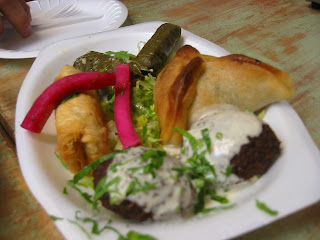 I've never had Lebanese food until as luck would have it, I ended up living very close to a Lebanese restaurant -- and a good one at that. Sunnin Cafe is a great neighborhood haunt -- it's affordable, has reasonably healthy and good-tasting food and is a family-run hole in the wall.

Walk in to Sunnin on a Saturday morning and you'll see delectably plumb eggplants crowded onto the grill, getting prepared to let out all their great smoky flavors.

My favorite appetizers are rekakat, which are rolls made out of filo dough stuffed with feta cheese, onions and parsley; spicy potatoes flavored with cilantro, garlic and spices; and babaganouj, the always-popular grilled eggplant dip. 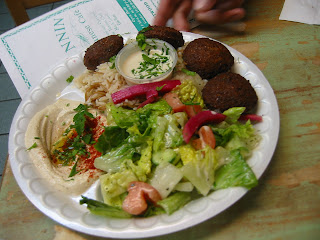 The falafels aren't bad but what I really like is the refreshing "Lebanese salad" that comes with most entrees. The salad, consisting of chopped romaine lettuce, cucumber and tomatoes, is dressed with a super light combination of oil, lemon and parsley. There may well be some other secret ingredient that I don't know about, but these are the ingredients I can taste.

The salad almost makes the other deep-fried appetizers guilt-free. Bite into a rekakat and the crispy filo dough comes crumbling down, only to find a burst of creamy feta goodness inside. Because it is rather strong, I wouldn't want to have more than one rekakat. One is enough to awaken your appetite and have you look forward to the main dish. 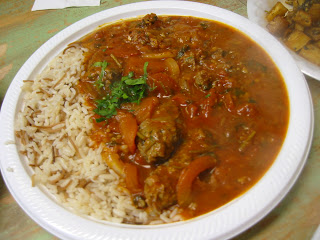 I am partial to the spicy kefta, which is grilled skewers of ground beef with chopped onions, parsley and spices, baked in a spicy tomato sauce. Despite its moniker, it's not overly spicy and the fluffy rice mixed with short strands of brown noodle-like garnishes is the perfect accompaniment. If you fancy some balance to the tomato-y sauce, top it off with some yogurt salad, which is a mix of yogurt and cucumber slices seasoned with garlic and mint.

If I'm feeling like something a tad healthier, I get the chicken kebab, a plate of grilled chicken skewers that comes with the Lebanese salad and the same rice. I generally avoid chicken skewers for fear of being disappointed by dry blobs of chicken breast, but Sunnin's are moist and juicy with just the right hint of the burnt grilled flavor on the edges of the chicken cubes. 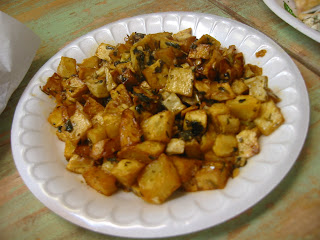 I consider the spicy potatoes to be a side more than an appetizer, as I like to have the cilantro-tinged potatoes -- that have been deep-fried and smothered in garlic and other spices -- in between bites of the spicy kefta, rather than before. The potatoes could be a little less oily, but the chopped fresh cilantro adds a slightly citrus-like flavor that make the potatoes taste less heavy.

As for the babaganouj, what's not to like? I will say, however, that I prefer the mutabbal, the Armenian equivalent, at Zankou from my previous posting.

My companion is a fan of sfiha, baked dumplings stuffed with ground beef, tomatoes, onions and pine nuts, but I find the dough of the dumplings, well, too doughy. If you must try one of these, I recommend fatayer, which is a vegetarian one with spinach, onions and pine nuts that is a bit less doughy. The tabouleh salad, burgul with tomatoes, onions, parsley and lemon juice, is another favorite of my usual dinner companion because of its refreshing qualities. I can live without it. 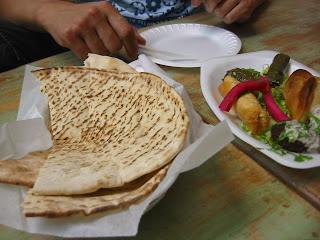 I didn't care for the various sausage varieties touted by the friendly owner, the mousakaa despite my love of eggplant, or that Mediterranean favorite, grape leaves stuffed with rice and vegetables, which are called warak enab.

For on-the-go lunch-seekers, most of the entrees can be had in a pita as a sandwich with the notable exception of the spicy kefta.

There is also a Long Beach branch.