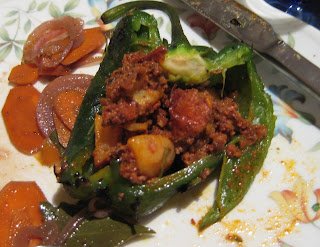 Here's a report on our semi-quarterly culinary trip around the world courtesy of Y and NJ's excellent adventures in the kitchen. We started off with Persian, then moved on to Italian with the Silver Spoon cookbook and ventured to Mexico this time. We both love to eat and cook, but we like to explore new ingredients and flavors as well. So we usually like to make things that get us out of our comfort zones (read: elaborate recipes with lots of ingredients we've never used before).

Enough of the foreword. Let's get to the meat of things -- the menu. 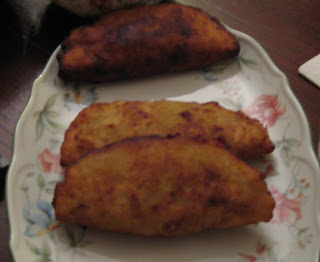 We started off with ripe plaintain turnovers with crab filling, made by my fearless partner in crime Y, which were good but her best dishes were definitely yet to come. I tend to go a bit crazy when it comes to offering "the whole package" to our guests so I made a huge pitcher of jamaica -- hibiscus flower water -- and horchata that can be made from a mix of almonds, sesame seeds, rice and/or barley (I used powder and water for both). And margaritas, of course, which I started off by measuring things and later just eyeballed to the delight of my guests. 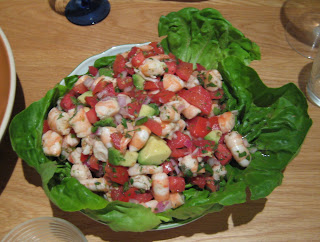 The shrimp seviche served on beautiful lettuce leaves hugging the refreshing morsels of citrusy shrimp with crunchy red onions and creamy avocado chunks sprinkled with cilantro bits was the perfect starter to get the appetite going. We also had a decidedly non-Mexican salad (except for the crumbly Mexican queso fresco on top) inspired by a trip to South Carolina that was made even more delicious by the addition of watermelon cubes to the greens. Then came one of my favorite dishes of the evening -- chorizo-stuffed ancho chiles with sweet-sour escabeche. I'm usually not a huge chile relleno (stuffed chile) fan because I find the usual filling of cheese to be too, well, cheesy and heavy. So it was with much excitement we decided to try this recipe and boy, did Y nail it! The chiles were soft and smoky but retained their crunch at the same time. The best part was cutting into them to find a hearty mix of chorizo and potatoes. The icing on the cake was the refreshing escabeche, a sort of pickled topping, that balanced out the potential heaviness of the chorizo mix. This escabeche had sliced carrots and red onions cooked with garlic, vinegar and other spices -- the perfect accompaniment to the stuffed chile. 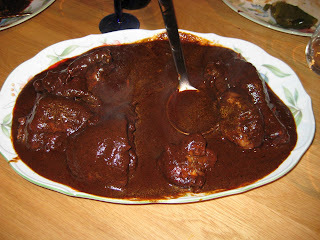 The onslaught of main dishes started pouring in, including ancho-marinated Oaxacan-style whole roast fish, Oaxacan black mole with chicken, braised pumpkin with pork, roasted vegetables in green sesame pipian, with the starch of choice being white rice and tomato rice. If these sound like unnecessarily long and complicated descriptions found at fancy restaurant menus, they are not meant to be (I trimmed a few down).

The black mole was one of the most labor intensive dishes I have ever made in my entire life. I'm glad it came out well in the end but I vowed this would be the first and last time I would make this dish from scratch. Not to mention the fact that I'm concerned about its less-than-healthy tendencies from all that charring and burning (notwithstanding its deliciousness). 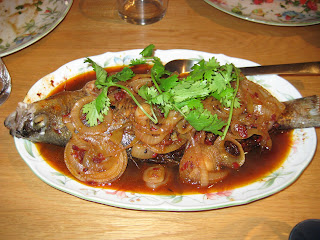 The fish was tender, juicy and had just the right amount of kick in its sauce. The pumpkin dish was sweet from the pumpkin and spicy from the tomatillo-chipotle sauce. I wish I would have added more pork. It left me wanting more meat. Making the sesame seed-based pipian was a lot of fun. I got to cook with a funky green vegetable resembling a cucumber, chayote, cactus paddles (nopales) and the herb, epazote, for the first time and learned that Mexican cooking used a lot of sesame seeds. The sauce had a very unique taste that blended all these new flavors with a familiar one for me, that of sesame seeds. I would recommend it for anyone but especially for vegetarians looking for something different. 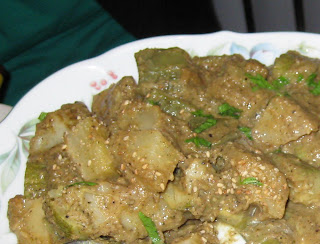 I made two kinds of rice as I wanted to make sure they would complement the dishes properly. I thought white would go better with mole and other heavily sauced dishes and tomato rice might go well with cleaner dishes such as the fish. The tomato rice was also spiced with jalapenos so it was important to have a neutral-tasting rice to balance out the strong flavors. 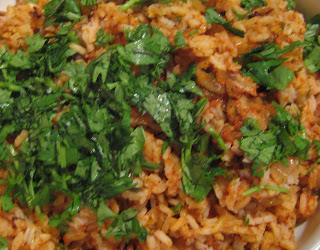 Overall, it was a success and we thank Rick Bayless's Mexican Kitchen cookbook. I had some reservations about going with a cookbook by a non-Mexican but who's to say a non-Mexican can't appreciate or make authentic Mexican food? And judging by his passion-filled PBS shows on the subject, I believe he is more than sincere in his quest to explore, promote and honor all things Mexican cuisine. 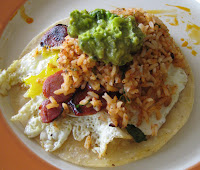 It was also fun eating leftovers the next morning -- transformed into the most comforting breakfast ever. Corn tortilla topped with a sunny side up, chorizo, tomato rice and a dab of home-made guacamole. Buen provecho!
Posted by ironchef442 at 10:24 PM 6 comments:

Samba BBQ Fest at its Best 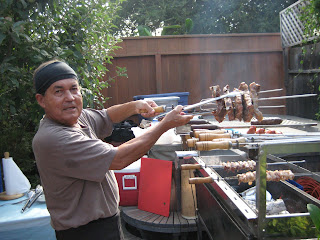 I've had many barbecues in my lifetime, but none come even close to the mother of all barbecues that I look forward to every year -- the annual Brazilian meat fest extravaganza presided by grill maestro Almir and hosted by our dear friends the Y-W's. The meats on metal skewers don't stop coming off the rotating grill and Almir doesn't stop sliding the sausages, filet mignon, tri-tip, lamb chops, etc. off of the skewers and chopping them on the eucalyptus tree trunk he uses as a serving board.

No sooner does he chop the meat do the crowds form around the board with toothpick in hand to grab the meat morsels. It's hands-down the best eating event of the year. 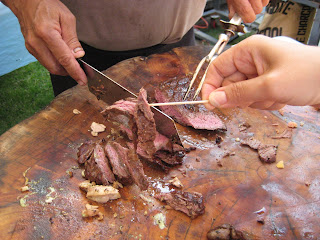 Most of the meats are seasoned lightly only with rock salt to bring out the natural flavors. Almir says he uses chunky rock salt because it seasons the meat just right as it melts on the grill. He cooks them just medium-rare to medium and when he slices them on the tree trunk for us to attack, the meat has a red blush in the center, is succulent, juicy and oh-so flavorful. It helps that he uses the best ingredients to begin with, including prime and choice beef, free-range chicken and gourmet sausages like sweet basil, smoked Polish and artichoke/parmesan/chicken. 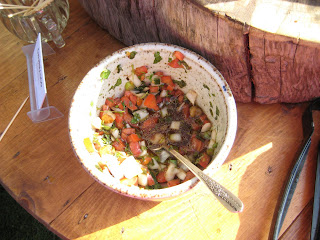 Then there are marinades, sauces and the bacon-wrapped varieties. This salsa that looks like any old pico de gallo is actually an Almir concoction that's a lot spicier than your garden variety salsa. It not only has tomatoes, onions and cilantro but also habanero chile -- pretty much the spiciest chile I've ever had -- olive oil and balsamic vinegar. The result: tangy pico de gallo with a kick that pairs perfectly with the onslaught of meats that can get a bit heavy on the stomach -- the light balancing out the meatiness. 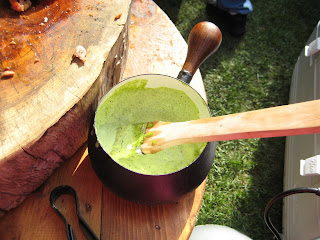 The other sauce is a beautiful green sauce made from mustard, cilantro, garlic, plain yogurt, among other ingredients, that he smothers on the charred chicken fresh off the grill. Once again, the flavors of the chicken with the sauce marry perfectly. He has other sauces for certain cuts of meat that he created, but sometimes, a slab of bacon is all one needs. As with his jumbo shrimp, filet mignon or chicken breast, the thick slice of bacon it uses to wrap these lovelies give that delightful saltiness that comes with every bacon bite as well as its slightly crunchy texture. After all, doesn't anything taste better with bacon? It raised the decadence and carnivorousness to another level. 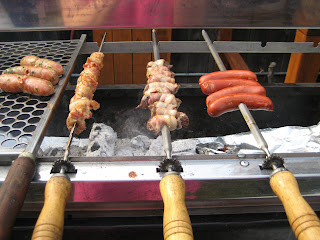 There are options for non-meat eaters but really, what's the point? I had some good salmon, asparagus and killer beans. But that would be like foolishly filling your stomach with distractions at a really good buffet. What better beverage to accompany all this than the quintessential Brazilian cocktail, caipirihna? Almir gives it another twist by adding passionfruit juice to make passionfruit caipirihna. Refreshing, citrusy and takes you back to those crazy Rio days. Not that I would know what those days were like, since the only time I've been to Brazil was Iguazu as a teenager. 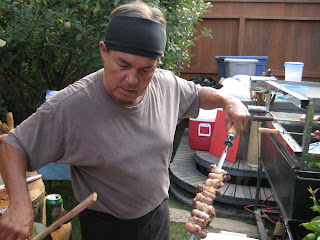 Let's talk about the man behind the rotating grill, frighteningly sharp skewers and eucalyptus tree trunk -- Mr. Almir Santre. A sports (mostly soccer) journalist by day, the Brazilian-born Almir started barbecuing more than 17 years ago when a friend showed him how to grill tri-tip at a party. “In Brazil, everyone throws a piece of meat on a charcoal grill,” he says. He hadn’t seen rock salt being used on meat before and observed his friend in action. Almir later hosted a party where a prominent Brazilian soccer commentator tasted his barbecue and liked it so much he asked him to cook for him next time he came to Rio de Janeiro. The rest is Churrasco history. 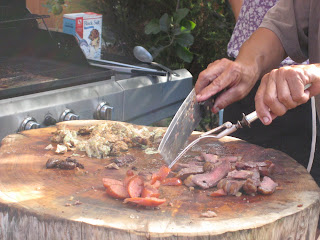 Now in his fifties, he has since cooked for the likes of soccer superstar, Pele, and “some soap opera stars.” He charges about $1,200, or about $35 a head, for a party of 35 to 40. He brought in the rotating grill straight from Brazil because he couldn’t find one in the U.S. that cooked the meat to his liking. He is the nicest man and makes it look all too easy. He says it takes a few days of advanced preparation for this party of at least 60. This year, Brazilian music and dance added to the festive mood. 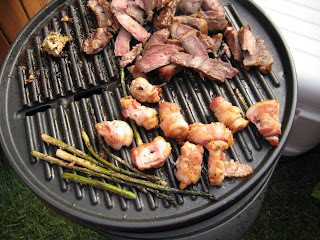 He surprises me every year with what appear to be new sauces, marinades or cuts of different meats, but the constants are supreme yumminess and shameless gorging. I've always loved his rock salt-tinged tri-tip and pork ribs. This year, my favorites were the grilled chicken dabbed with the green cilantro sauce and his New York steak topped with a little of the habanero sauce for some kick. Then again, it's hard to decide given the incredible wealth of options. I saw pork loin stuffed with sage leaves, lamb chops, lamb shoulder, skirt steak -- the list goes on. 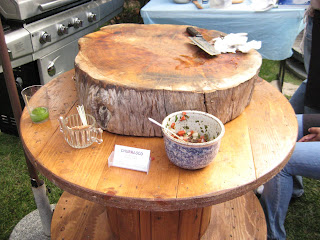 This tree trunk, the empty glass of caipirinha, toothpicks and some sauces are all you need to enjoy this truly once-in-a-lifetime experience (unless you're lucky enough to be invited to this annual fiesta like us!). I highly recommend it for anyone interested in hosting an amazing barbecue party. Almir has cooked for wedding banquets as well and I think that would be a fantastic idea. Enjoy.