Faux Pas Bistro: Are Smashed Home Fries a Faux Pas in a Bistro? That's The Least of Their Problems. 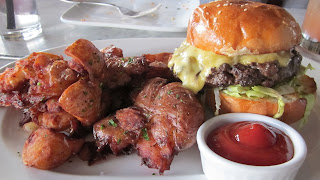 I really wanted to like this place. The location is great, the ambiance and open-air setup take me right back to bistros in Paris or New York and service was excellent. But alas, the food just didn't deliver. To be fair, the place just recently opened so line cooks are still "in training," we were told. But it held so much promise. 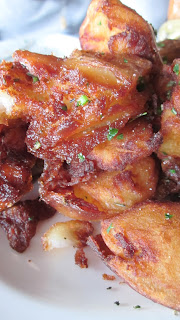 I mean, look at that incredibly photogenic burger with smashed fries, which, by the way, seem to be the fries du jour. But more on that later. Let's talk about this beautiful burger. No sooner had I bit into it did I discover the patty tasted good but it wasn't cooked right. Not enough redness. It was overcooked the first time and then the second time around as well. We didn't want to be too harsh so didn't ask for yet another round but...I won't belabor the point.

So the patty itself was flavorful enough with decent texture but again, it was somewhat ruined by overcooking. I also had issues with the works -- shredded iceberg lettuce, really? One, it was a royal pain to eat and didn't add much to the mix. Two, iceberg? Who does that for a $12 burger? Could hardly taste the roasted garlic aioli or the cheddar cheese. The sesame brioche bun was ok but it could have been less dense. Yes, I have issues with dense buns. And I just wanted to write that. 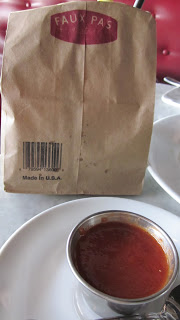 The "fries" were more like smashed home fries, which our server had warned us about but I had read the posts about these beforehand so it wasn't a surprise. I thought it was well executed -- even better than at Short Order at the Grove. It's true I not-so-secretly longed for double-fried-in-duck-fat-kind of super crispy "frites" you get at bistros (think Schillers' Liquor Bar in New York) but I still appreciated these for their uber crispiness. And the fact they weren't over salted, a topic I have been known to rant about. 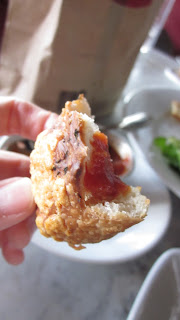 Let's balance the bad with the good. Look at adorable the bread "basket" arrived at our table with a side of tomato spread. The tiny breads were nice and warm although they weren't stellar, they were good, especially with the spread.

I must now judge the Margarita pizza, or Pizzette Marguerite. Not sure it's the correct use of the word, pizzette, at least according to a rudimentary search I did to figure out the difference with a pizza. It's apparently plural for pizzetta, a small pizza in Italian but maybe it means something else in French. 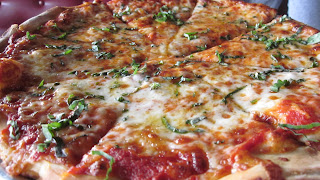 Anyhow, it had none of the airy lightness I recall from the OG pizza in Napoli. The dough was too thick and doughy. There was far too much cheese that made it even heavier. The balance of dough, cheese and tomato sauce was all off. Sliced fresh basil on top was the only decent thing about it and that's not saying much. So we took it back...They were thankfully very gracious about not charging us for something we weren't going to want more of. 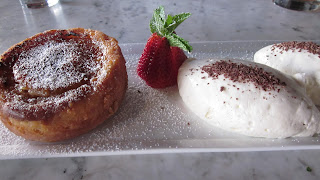 So gracious were the host, server and sous-chef that they gave us a pineapple tart with chantilly cream on the side on the house. Again, I didn't love it but it was very generous and nice of them to make sure we left happy. The tart was too sweet and dense but I liked the pineapple brulee that I cracked with the tip of my spoon. 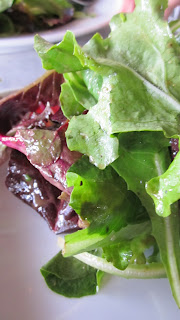 My final rant about the place is the green salad, which was absolutely nothing special. Ok, it's just a starter salad but some tossed greens and two pieces of tomatoes doesn't make a salad. Disappointing for a fancy bistro that presumably takes its food seriously. Why not try to wow us with a seasonal salad like the incredible carrot salad I had recently at Son of a Gun? Bo-ring.

I'll probably be banned from this restaurant as they'll know it was me. I'm not sure I'll be returning though because while service was really attentive and I appreciate them going out of their way to accommodate us, they really need to work on the quality of the food and execution. Like I said, I really do want them to succeed. Honest to God.

But for pizza, must confess that I'd much rather go to Olio a few blocks away. And for burgers, well, you know my faves (Houston's in case you don't!).
Posted by ironchef442 at 5:00 PM No comments: 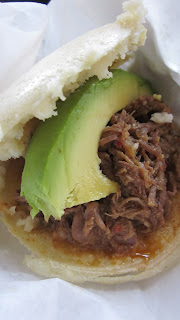 I always like to have a good arepa and I recently got a chance to have one at a Venezuelan joint in Santa Ana called Mil Jugos, literally translating to a million juices. The arepas were a bit thicker than I like them but the meat filling was ok. I had the carne mechada, which is similar to carne machaca that is one of my favorite torta fillings. It's shredded meat with garlic, tomatoes, onions and red bell peppers. The only thing was I wished it were a bit spicier. 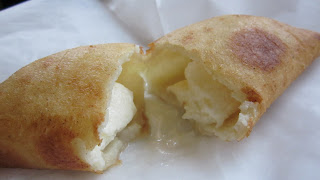 We also had the cheese empanadas, which were fried and filled with queso fresco. They were a bit greasy and the cheese wasn't exactly melted in an oozing kind of way. But they were a good side dish for the meaty arepa.

The sauces were the best part of the meal. There were two of them: one was guasacaca sauce, a bright green one containing avocado, fresh parsley and coriander, green bell pepper, onion, garlic, salt, oil and vinegar. Some like to add chiles for kick. It also had a less creamy sauce that was similar to chimichurri sauce but more finely ground, with the usual suspects of parsley, garlic and some kick.

I also had the tequeños, cheese-filled deep fried finger food often served in cocktail parties. They were ok -- again, I like the stringy cheese that's been melted but the cheese here was more like queso fresco and therefore not oozy like the way I like it.

Still, I'd like to return to try its cachapas and other arepas. But since it's far, in the meant time, I'll continue going to Coupa Cafe nearby for my arepa fix.
Posted by ironchef442 at 5:00 PM No comments: 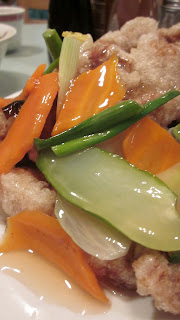 I think watching one too many Korean soaps had given me a hankering for jjajangmyun, the classic Korean Chinese dish of slippery noodles in a greasy and delicious black bean sauce. That's because of all the many eating scenes on Korean TV, there's always a requisite scene of a delivery man bringing a bunch of glistening noodles that people subsequently wolf down in exactly two minutes. So I went to Young Kyung (also spelled Young King, although in Korean, it's 연경 and therefore should be romanized as Yeon Kyung. Whatever.) in Koreatown, probably one of the most old-school establishments serving the dish. 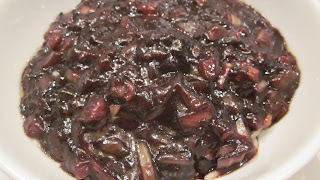 It's not the most photogenic dish. It doesn't score any points for food porn. Once you mix the noodles up with the black bean sauce, forget about it. It's even less appealing to the eye. But take a bite and you won't be able to stop. The pork and onion pieces in the sauce coat the noodles evenly. Key is to mix it up before the noodles get too dry and start sticking to each other. The noodles were not too soft although they could have been a bit less cooked and the sauce was not too sweet and just salty enough. Some places put too much caramel or corn syrup and ruin the sauce by making it taste like candy. 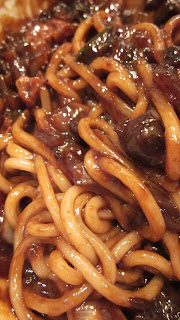 While the dish is good by itself, it wouldn't be hitting the spot completely without the accompaniment of 1) tangsuyook, sweet and sour pork/beef and 2) Korean Chinese kimchi made with green cabbage instead of the traditional napa. I liked the way Young Kyung served it -- the deep fried morsels of beef separate from the delightfully gooey, sweet and sour sauce dotted with slices of carrots, cucumber, mushrooms and green onions. This way, you only need to add sauce to parts of the beef pieces so the rest stays crunchy sans sauce. And crunchy they were. That's another aspect of the tangsuyook I liked -- the beef pieces were extremely crispy, likely coated in sticky rice flour that make them extra crispy. 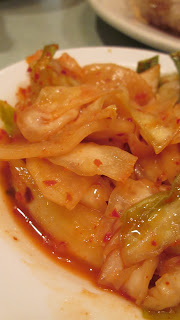 Then the kimchi was not bad, although it wasn't great. It was a bit watered down but maybe they didn't want the spiciness to overtake the flavor of the noodles. Gotta love a place that takes their food so seriously that when asked to box the leftover tangsuyook, the server brings two separate boxes, one for the meat and another for the sauce. When I commented on it, she emphatically said, "of course they should be separate!" The quality of the meat wasn't all that great but I was impressed with the care they put into making it crispy and the sauce wasn't too gooey-thick or overly sweet like many other places.

It also serves raw sliced onions with concentrated black bean sauce as a dip and that's only for the brave who don't have to worry about having onion breath afterwards. Pour some vinegar over the onions to reduce the spiciness if you're diving into them. Pickled radishes are usually offered in Korean Chinese restaurants but for some reason, not this one.

For a bit of history, Korean Chinese dishes like jjajangmyun were brought into Korea by Chinese immigrants in late 19th century and is said to have originated from Shandong province in China. The modern-day version is a modified version of the original, which didn't have meat or vegetables and was lighter in color. Many ethnic Chinese in Korea used to run restaurants serving this dish although that has changed in Korea.

At Young Kyung, however, the servers spoke to the Korean customers in Korean and to each other in Mandarin, indicating their ethnic Chinese heritage.
Posted by ironchef442 at 5:00 PM No comments: 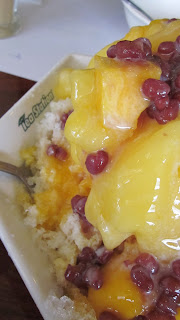 I got the mango shaved ice with an addition of red bean topping, as I had had my caffeine fix earlier that day and craved patbingsoo, that venerable, seemingly loved dessert of red beans plus shaved ice whose variations are available in several Korean, Chinese and Taiwanese coffee shops. 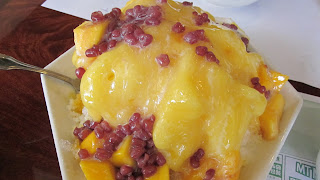 It was a massive mound of shaved iced, topped with mango flavored snow shaved ice, sprinkled with red beans and condensed milk.

I loved that it stays open until 1am and offers snacks like butter toast (aka brick toast) and a bunch tea-flavored goodies like Pu-Erh Flavored Beef Stew with Green Tea Noodle.

Consider it an East Asian Starbucks, at least in price level, except not yet as ubiquitous and much cooler. It's just sad it's a bit of a trek to get to one.