My so-called Life as a Food Paparazzi and Top Burger Showdown: Rustic Canyon vs. Houston's

I'm a bit miffed at how food bloggers and camera-happy food lovers are given a bad wrap in recent NYT and LAT articles. I think many restaurateurs are feeling the heat about the prospect of having anybody be critics and potentially influence their business. I don't see how taking pictures of the food hampers their work or craft in any way. Just because we take pictures of the food doesn't mean we don't appreciate the food and let it go cold before consuming. Get used to the scrutiny, peeps.

Speaking of pictures, some fancier restaurants dim their lights so low it's hard to shoot a good picture of the food anyway.

Which brings me to the point of my post. I found a burger at Rustic Canyon that's on par with my favorite burger in LA. That's remarkable considering how loyal I've been to the California Burger at Houston's. It's been unbeatable until I tasted the burger at RC. I wouldn't go as far as saying it was better, but it was equally good.

Unfortunately, I wasn't able to shoot images of the venerable RC burger because it was far too dark and the flash messes up the photo. I'm posting a photo courtesy of Feast. But I can vouch for the excellence of this fancy burger. 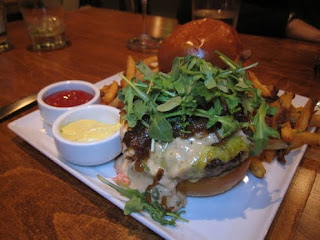 Like the Houston's burger, it had a fantastic patty that was grainy enough and seasoned and cooked perfectly (medium rare). The bun, oh, the bun. I'm not sure if RC's famous pastry chef makes the buns too (RC's owner also owns Huckleberry, a bakery across the street known for its maple bacon biscuits that I find mediocre) but the bun was perfect -- soft and fresh but also firm enough to be able withstand the heavy patty and all the works. Houston's has a sesame bun but this one was just as good.

The works: I like Houston's better with arugula, avocado, red onions and American cheese with a side of mustard and barbecue sauce. The RC burger pairs the Niman Ranch beef patty with Gruyere cheese, caramelized onions, pickles and an herb remoulade.

The fries: RC's is better but not by much. Houston's needs some work with the shoestring fries, which I was never a fan of. And both should offer sweet potato fries, which I'm particular to. For a fancy place, I was telling my dinner companion that the fries looked and tasted more like diner fries. Diner fries should be served at diners.

Oh, and RC didn't have barbecue sauce, which I usually like to dab on my bloody burger before sinking my teeth into it. But I was impressed to find they instead had a homemade Sriracha sauce, death ketchup itself, which was a good substitute.

Some of you may know my obsession with burgers -- so much that I'm part of a burger club that regularly samples burgers around town and rates them. Check out my burger roundup.

On that note, I've always considered the Father's Office burger highly overrated, but last night I tried it again and it was better than my first time. Although I'm still no big fan, I'd say it's on par with Umami Burger, which is not too shabby. Just not the best by any stretch.

Euro Pane: Best Croissant it is Not 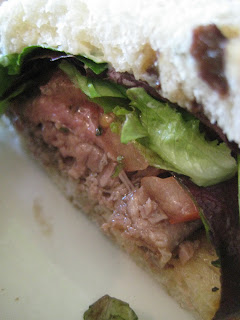 I admit I had high expectations for Europane, the venerable bakery in Pasadena whose chocolate croissants sell out so quickly I haven't yet sunk my teeth into one. Maybe I should defer my review until then, but I have to say, if the chocolate croissants are anything like its regular croissants that I have tried, I haven't been impressed. Breadbar has a far superior croissant. It wasn't as flaky or buttery and just didn't do the trick. Europane's quiche was no contest to Tartine Bakery in San Francisco, which is as delicious as it is decadent. The macademia nut tart was too hard and not seasoned right. Its sandwiches sounded good on paper -- roast beef with horseradish sauce on cranberry walnut bread. The bread was fantastic -- fresh and flavorful. The sandwich? Not so much. Meat was hard to bite into because of all these connective tissues and it was a bit bland. Still, Europane seems to be doing something right to expand to an Old Town location that's decidedly bigger. I just need more flavor that lives up to its hype.

Sushi Zo: Excellent But Too Sauce-Happy 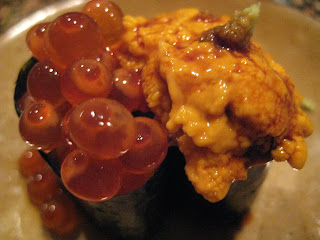 I'm usually very loyal to my fave sushi joint in LA (Hiko Sushi), but I had to taste for myself the hype that Sushi Zo got in message boards galore. The sushi was excellent. The chef was also known to be a rude and forceful sushi chef, in the vain of the Nozawa "trust me" chef. Service was definitely rude but the sushi made it bearable. The best was squid sashimi cut in strips topped with uni. The combination of silky and chewy strips of squid with creamy, delicious uni was amazing. 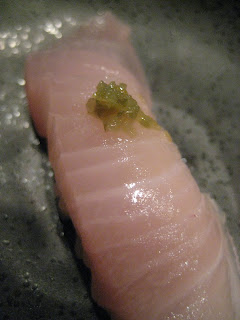 The fish was top quality but the only gripe besides the service and arrogance of the chef was the over-saucing of fish that was so fresh it would have been perfectly fine without sauce of any kind. This yellowtail was an exception that only had minced yuzu and some rock salt as a topping.

Toro, or fatty tuna, is usually my favorite sushi but he bathed the toro in some soy sauce-based concoction that I felt masked the truly fresh flavor of the fish.

Another case in point was the sea bass, which was also topped with some kind of soy sauce with minced garlic and green onions. I thought the fresh could have easily stood on its own.

The time when I appreciated the sauce-happiness was the monkfish liver, which was deliciously topped with some fishegg sauce with green onions. 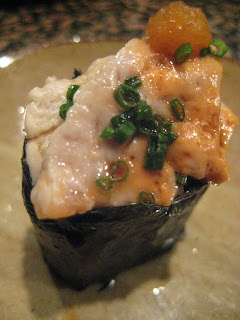 I must disclose that my favorite sushi joint, Hiko Sushi, also has a chef that people think is too arrogant and rude. But I'm biased, because I love me my Shinji-san (at Hiko) and he's never rude to me (he even accomodates my request of no wasabi in the sushi -- imagine that!).

Maybe this Zo guy is nicer to other regulars and he may have gotten ticked off when I asked him for his recommendations on what's most fresh. His answer: Everything is fresh. True, Shinji-san would have said the same thing and may have even added indignantly, "Stupid question." But Chef Zo was so belligerent in his ways that it really turns off the customer. What's with this sushi dictatorship trend?

Sushi Zo is worth trying but not sure it will replace my Hiko anytime soon.
Posted by ironchef442 at 7:15 PM No comments: 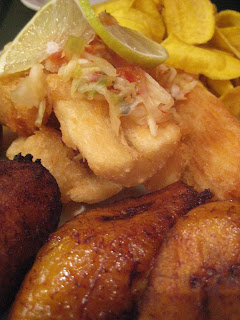 Another great value joint is Jaragua, a no-frills Salvadoran restaurant in Koreatown with great service and even better food. Granted, it's hard not to like an appetizer sampler that includes beautifully golden fried plaintains, a soft and plumb fried empanada, freshly fried thin plaintain chips and yucca fried to perfection topped with curtido, a spicy and crunchy slaw made out of cabbage, onions and carrots.


This could feed at least three people. Throw in a pupusa or two, which are wonderful corn pancakes stuffed with super stringy cheese, beans or other goodies, and you've got a hearty meal, if not necessarily a healthy one.

The curtido slaw is a great refreshing accompaniment to the pupusas that balances out the slight heaviness from the cheese. I personally can't get enough of curtido. 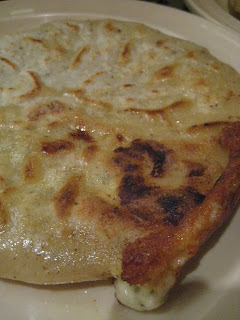 Check out the cheese oozing out of the pupusa to the left. That's the beauty of a fresh-off-the-griddle pupusa that must be consumed quickly or risk battling with stringy cheese that tastes rubbery and congealed.

I have to admit, I couldn't finish a pupusa in one sitting because I find the cheese too heavy, even with a heap of slaw at every bite. But not to worry. It tastes pretty good when you either microwave or heat it up in a toaster oven at home.

Jaragua also serves tamales, but I wasn't crazy about them. They were too doughy for my taste. I usually like the ones wrapped in banana leaves instead of corn husks like the Mexican ones because they usually have less corn masa and I've always liked the addition of the olive.

The service is excellent and I wouldn't hesitate to return for more. Fried yucca! Fried plaintains! Fried empanadas! I can't help myself.
Posted by ironchef442 at 8:09 PM 2 comments: