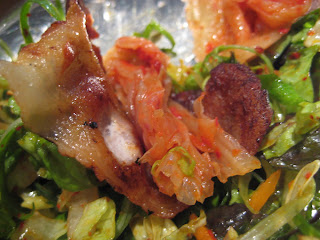 What makes a barbecue joint good is the quality of its meat and condiments. That is certainly the case for Dondaegam in Koreatown, which specializes in pork barbecue. Order a sampler and you get pork belly, pork loin and marinated pork that will cook tableside and be popped into your mouth with some spicy lettuce and green onion mix that complements the meat perfectly.

Add its well fermented kimchi and it's pure heaven. The pork belly gets crunchy, almost like thick bacon, so the added texture contrast makes this experience even better. 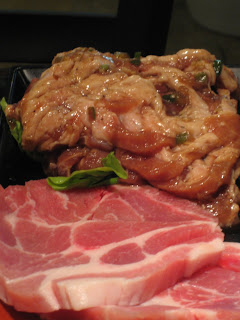 Dip the unmarinated meat first in one of two sauces, sesame oil, salt and pepper and then dab a sriracha-based spicy sauce onto the greens mix plus meat concoction.

Wish I could write more but I'll let the images speak for themselves. It's juicy, not frozen meat and very lean and tender.

J. Gold gave it a rave review and it's by the same owners as the much-beloved Park's BBQ that is known for its beef. 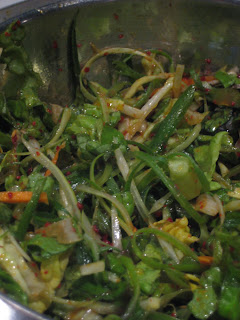 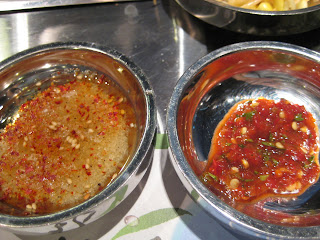 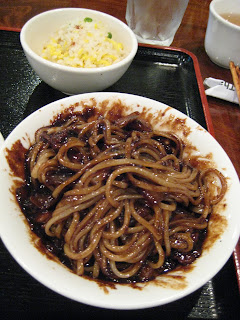 Whenever I get a hankering for decent jjajangmyun (alternately spelled Chachiangmen), the classic Korean-Chinese black bean noodle dish, I head to Dragon, or Yong Goong in Korean. It has one of the best lunch deals in town, offering a meat or seafood dish as a combo for anywhere from $8 to $13.

The combo meal also includes fried rice and a fried wonton but neither are remarkable so I'd stick to the noodles and main dish.

My main dishes of choice are the tangsuyook, or sweet and sour beef, or the Kung Pao chicken that has a slight kick to it. Sure. Neither one of them is healthy by any stretch. Both are deep fried and somewhat smothered in sauces. That's where the kimchi, raw onions and pickled daikon radish that accompany any meal come in to balance out the grease. 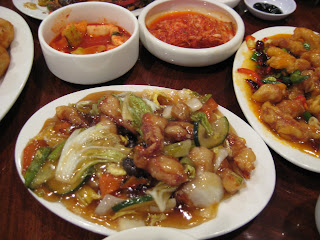 The raw onions can be dipped in what I call black bean essence -- a dense paste of unadulterated black beans pureed and seemingly seasoned only with salt and a dab of oil to soften it. It's an acquired taste but one worth checking out. Just don't do it on a weekday when you have to return to the office and have to face your co-workers with some pretty potent onion breath. For those who want spice all the way, jjamppong may be more up your alley. Jjamppong is a soupy noodle dish that is a hodgepodge of all things seafood such as squid and shrimp whose broth is so spicy that it bears a red-hot hue. It doesn't mess around with spice so beware.

I'm a sucker for complimentary desserts and I absolutely love the little morsels of deep fried (I know, again) sweet potato pieces covered with clear syrup that hardens like candy by the time they reach the table and are quickly popped into my mouth. These lovelies basically taste like candied sweet potatoes, also known as matang in Korean and sold on street carts in Seoul. Whatever they're called, they're delish. A great finish to a meal.
Posted by ironchef442 at 6:07 PM 2 comments: 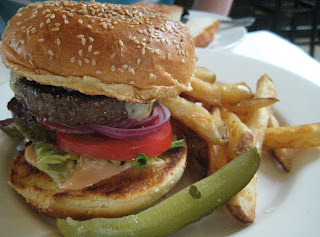 Who knew that the highlight of my Santa Ynez wine country trip would end up being (besides the wine, of course) none other than a bloody burger with one of the best barbecue sauces I've had west of Texas?!

I had three burgers in two days because I'm a burger fiend but only one of them at Los Olivos Cafe in a tiny sleepy town just outside of Solvang took the prize. This patty was juicy, flavorful and had just the amount of bite that I liked, albeit a teeny bit overcooked. 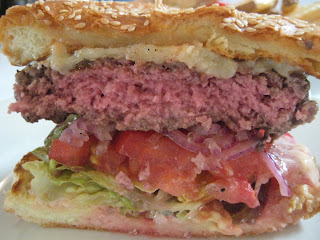 Still, it was plenty messy to eat. The sesame bun was warm and firm enough to withstand the huge mound of "the works," including tomato, red onion, romaine lettuce, pickle, cheddar cheese and a dollop of thousand island dressing. While taking a bite may leave stretch marks on the side of your mouth, it's well worth it. The combination is fantastic. The fries were crispy, warm and not over-salted. The barbecue sauce that seems to have been made at the premises from scratch was out of this world. Maybe it was also the excellent Los Olivos' house Pinot Noir that I washed it down with that made it all the better. Still not at Houston's level, mind you, but very good (The 'cue sauce was hands down better than Houston's, however. I wanted to drink it.). Just remember to skip the unremarkable pizzas.

P.S.: Stop by Stolpman Winery Tasting Room known for its Syrahs if that's your thing. It's delish. 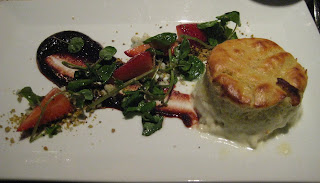 The second-best dish I had was the Maytag blue cheese souffle at Root 246, Bradley Ogden's new place in Solvang that also got a decent review by the LAT last week.

I'm not even a huge blue cheese fan, but it had me at souffle. It was like blue cheese mousse that was made milder from the cream or whatever they added to the souffle to make it so delightfully fluffy and airy. The blue cheese was sandwiched in a crusty puff pastry shell that made for a great mix of textures. The accompanying strawberry and watercress salad gave it a refreshing counterbalance to the slight heaviness of the blue cheese. I love eating things like this that are clearly dishes that would be very hard to make at home. There's a reason souffles take so much time and care to perfect! 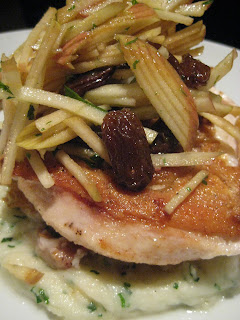 I also liked the pan-fried chicken that came with mashed potatoes and topped with thin apple slices and what looked and tasted like giant raisins. Although chicken breasts are usually too dry for me, the chicken was perfectly juicy with a crispy, salty skin that seasoned the chicken nicely. The potatoes were a tad bland (thank God for the Tapatio they had handy) but I liked the salty and sweet/tart interchange with the chicken and toppings. Not as revelatory as the souffle but still good.

I didn't have any of the dishes LAT raved about but the calamari and burger I had were not worth raving about at all. The calamari was overcooked the first time and then the second time as well so we barely touched it and they thankfully didn't charge us for it. The burger was average and I wouldn't get it again. 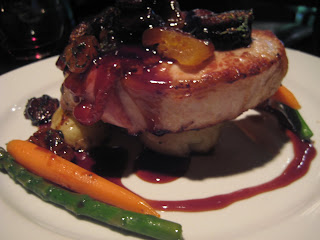 Next up, the Hadsten House in Solvang had a very juicy (Please excuse my excessive use of this word. What can I say? I can't stand dry meats.) pork chop but they poured far too much of the fig and apricot sauce over it that overpowered the meat with its sweetness. I like a sweet sauce with pork but this was too much, as it took it away from the nicely-brined pork chop that would have been able to hold its own without being smothered in candy. I learned a long time ago that the secret to the best pork chop was brining it in apple cider + water or some kind of liquid to ensure the moisture is retained. Avoid the scallop appetizer that sounds enticing. It was overcooked and drowning in bacon and bread crumbs and as a bacon-lover I can safely tell you that it wasn't a good thing. The service at dinner was appallingly rude and annoying but breakfast food and service were both good. So much for consistency. Desserts were ok but the portions were ridiculously large. 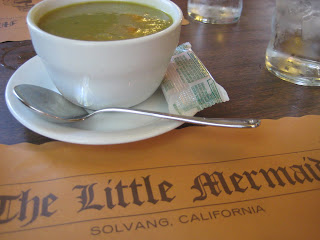 Now for the worst of "Sideways" country (brace yourself for reminders here at every corner): Avoid Little Mermaid on the main road like the plague. Split-pea soup and a sampler of traditional Danish open-faced sandwiches were below average. There were chicken liver sandwiches topped with beets and pickles and cheese sandwiches topped with radishes and carrots that were ok but not enough to order again. The sausages sampler that came with a scoop of mashed potatoes and green beans looked and tasted like a frozen TV-dinner gone from bad to worse or straight-up plane food. Either way, the worst of images and analogies. 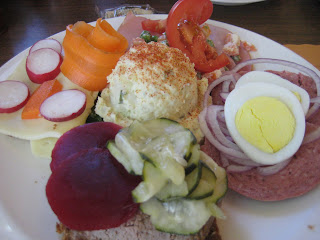 I was seduced by a cute-little shack called the Big Bopper Drive-in and made the mistake of ordering the namesake burger that was so incredibly overpriced (for a shack burger, that is) and positively disgusting. I can't believe they actually sell this as an edible piece of meat in between bread. The tacos are supposed to be ok but I'm not going anywhere near that place again.

So, I had to have the famous Aebleskivers, little fried doughy balls with powdered sugar and raspberry jam that this town is known for. I found the ones at Solvang Restaurant to be too flour-y and didn't like them. But maybe it makes a great one that I just happen not to like. 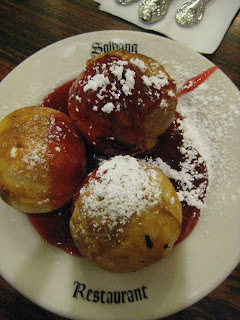 Here's another tip for winos: Check out Curran, Melville and Lucas & Lewellen tasting rooms for some awesome Pinot Noir and other wines this region is known for. I was ecstatic to have discovered a late harvest white that actually smelled and tasted like it had lychee in it! Priceless.
Posted by ironchef442 at 10:44 PM No comments: