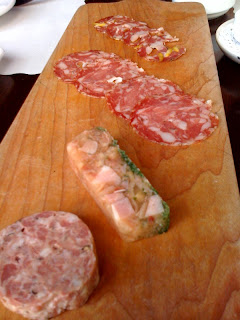 I've been lax. The good news is, I have so many places to review and rave about. Of course, also some to rag on but let's focus on the positive. I'd been reading good things about Church & State and it is located in the hip artists' district near Little Tokyo so it showed a lot of promise. And it was one of those meals that are so bad for you it's good. The chef seems to worship anything lard and meaty, which I totally approve of.

A group of us started with the charcuterie sampler that had all sorts of delicious and delightfully salty (and fatty) cured meats and as if that weren't enough, we also got pate with port jelly that came with a perfectly toasted brioche. 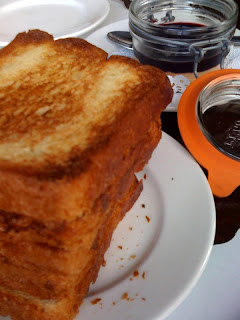 We didn't even bother balancing these out with anything remotely resembling greens. The other items weren't as successful as these first two. Not sure if it was the fat overdose, but the short rib sandwich (that actually did come with greens), the mushroom and cheese tart and the roasted bone marrow weren't nearly as melt-in-your-mouth as the pate.

The short rib sandwich, in particular, should have been like buttah. But alas, while not terrible, it disappointed.

The mushroom and cheese tart was too cheesy for me but that may have something to do with the fat overload. I should probably mix things up a little more next time. 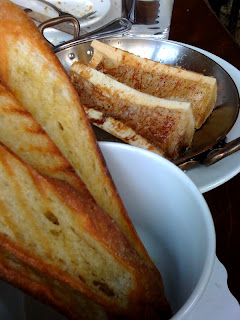 The bone marrow roasted in an oven was the grand finale but I, for some reason, was expecting the marrow cut across like tree trunks. It came cut lengthwise and while good, also didn't meet my expectations entirely. I still finished it because bone marrow is one of favorite things in the world, but left some to be desired.

Happy to report that like any self-respecting bistro, the fries were delicious. They came with an aioli-like dip that was nice and garlicky.

The ambiance and service were both good and I would definitely return. The only thing is all the wonderful fat needs to be tempered by some serious greens or straight up wine. Otherwise, it'll be too heavy. I know I paid for it. 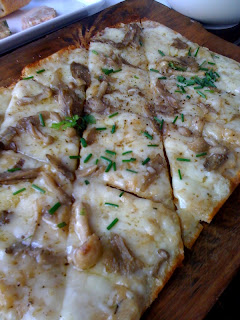 It would be great if it offered happy hour but not sure why it doesn't, especially given its location right across Royal Clayton's, that good ol' pub serving all sorts of tempting drinking fare like Shepherd's pie and fish and chips.

Email ThisBlogThis!Share to TwitterShare to FacebookShare to Pinterest
Labels: Church and State, Downtown 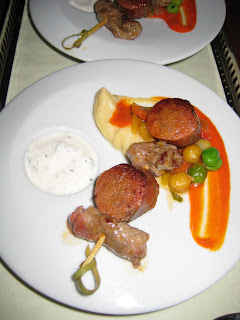 I first had Michael Mina's food at Seablue in Las Vegas and liked the way I could sample multiple small plates in one order. As one person dining, this allowed me to try various ways a certain kind of fish was cooked. The food was beautifully presented (for example, a rectangular dish with three pockets featured beef cooked three ways) but more importantly, meticulously prepared with quality ingredients and delicious. Like with Jose Andres from Washington D.C., I was waiting with bated breath for Mina to open an L.A. restaurant.

Amid mixed reviews of his XIV by Michael Mina in West Hollywood, I couldn't resist the multiple-course "light meal" that message boards talked about and so headed over for a special occasion.

The verdict is that some of the dishes on the tasting menu were excellent and others were average to below average, especially for the price. 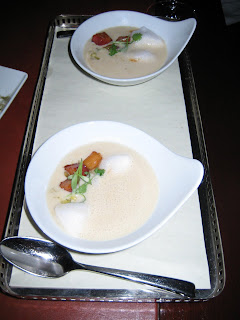 My favorites were the corn soup, chicken cobb salad and duck. The corn soup was sweet, creamy and featured a perfectly seared piece of pork belly floating, along with what tasted like apple cider foam and cilantro bits. The soup was great in and of itself, but combined with the saltiness and crunchiness of the pork, bordered on divine.

Just as good was the Jidori chicken salad that was a deconstructed cobb salad where all the ingredients were gingerly laid out on the long plate, including a creamy slice of avocado, a lettuce the restaurant dubbed "baby gem" and just-potent-enough blue cheese chunks. I recall other classic cobb salad ingredients, like bacon and hard-boiled egg. The chicken breast was moist and not dry at all, unlike other salad meats. The dressing was light and complemented the components of the salad very well. 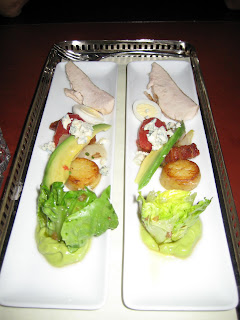 The Liberty duck breast came sliced on the bias with plenty of pink inside indicating juiciness, seared foie gras -- which is the best way I like duck liver, tender leg confit and some kind of corn bread. There was pineapple and star anise infused into the aromatics of the dish. One could argue this may be duck overkill, but it didn't taste very gamey or overly heavy. 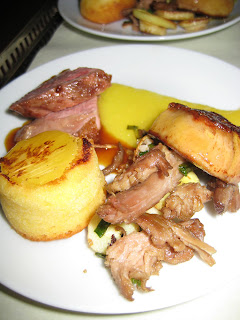 The other dishes weren't as successful though equally interesting. It's good that we get to pick and choose any eight dishes on the menu. One could get eight desserts if one's heart desires, or eight main dishes if one's stomach is a football field (although portions are reduced for the multiple-course options). I had to order the luxurious-sounding, much-talked about lobster pot pie. I mean, what's not to like, right? Wrong. The pie crust was good enough, but 1) I could hardly taste any lobster meat, 2) the inside of the pie was bland, bland and 3) for the exorbitant price tag, it blows. 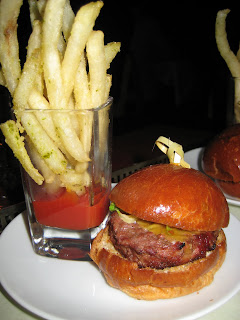 I love a good, bloody burger more than I can say, but the kobe sliders were nothing special. The fries were just as unremarkable. I make a better slider, if I may so myself!

We also had a skewer (first image above) of lamb chop, lamb loin and Merguez sausage that came with a hummus-like chickpea paste and yogurt-y raita. It looked beautiful on the plate but tasted just ok.

The naan-like flatbread we got before our meal with some kind of creamy accompaniment was good enough. The wine and champagne selection was extensive.

The desserts were the least memorable. One was a chocolate cake with some sorbet on top and the other was some foamy thing that was refreshing but nothing to write home about.

Service was stellar but I didn't love the tight quarters. For such a fancy restaurant, I'd prefer to have more space between the tables (reminded me of Balthazar in NY or those tiny French bistros where you're elbow-to-elbow with your neighbor).

I probably would return for a special occasion but with so many others to try, it might be a while. It's a bit of scene but go for the food. Valet is steep so park on the street if you can find a spot.