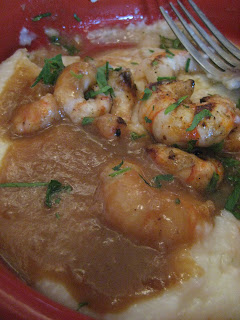 I'm sure the cool maritime decor and foggy weather in Sausalito had something to do with it, but Fish was pretty excellent.

It wasn't cheap by any means but maybe because I was traveling, or maybe because I had just endured a windy car ride that made me severely car-sick, I felt it was somewhat worth it. Oh, and a minor detail -- I was treated.

The fish was fresh and Fish was both good at doing old standbys well (think fried fish sticks) and offering new and interesting takes on old ingredients (can you tell what the picture on the right-hand side is?). 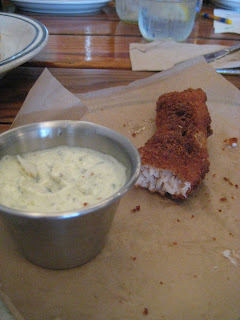 Yes. It was shrimp, but not any old kind of shrimp. I don't really like peppering names of dishes with millions of qualifiers and adjectives, but for the record, these were Kelsey Michelle spot prawns. They looked and tasted different from the ones I'm used to eating at home and other restaurants. I'm guessing these were caught locally and it showed. They were sweet, plump and delicious.

Key to this was what it came with -- spicy Spring Hill Cheddar grits and local dungeness crab gravy. I'm usually not a grits person whatsoever, but I made a huge exception here because these grits actually had flavor -- spicy with that loverly sharp taste of cheddar cheese. Seriously, what's not to like? To add amazingness to the already goodness, it was smothered in crab gravy. 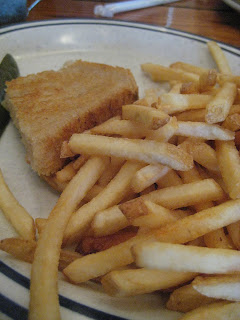 Again, anyone who knows me will tell you I've never liked gravy. But this one was definitely special. While it wasn't exactly crab-filled, the little pieces that I did find really added a lot to the texture and flavor. What a great dish.

The fried fish sticks were good but I wouldn't return just to have that again. It's pretty plain, although I do appreciate its simplicity.

The grilled cheese sandwich was nothing to write home about. But the fries, oh the fries. This place understands that no self-respecting seafood joint that hawks crowd favorites like fish and chips would have fries that are anything but perfectly crispy, piping hot and not over-salted. Definitely not the frozen kind. I had a hard time keeping myself from wolfing down the entire batch of fries so I could leave room for the real deal -- the super fresh seafood served so creatively here.

It's far from home but I'd definitely like to return here on my next trip.
Posted by ironchef442 at 2:00 PM No comments:

Veto Vito's Pizza and Pass on Pinches Tacos in WeHo 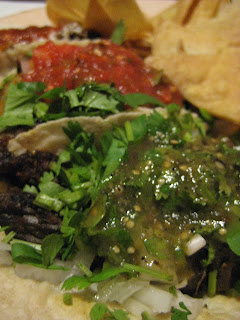 I've been reviewing the good, so it's time to review the bad. Pinches Tacos and Vito's Pizza, both in West Hollywood.

The carne asada tacos were tough and the meat was not well-seasoned, just overly salty and flavorless. Then they got the order wrong -- brought us chicken mole tacos instead of the grilled chicken we wanted, and were too hungry to take back by the time we got our food. Still searching for that decent Mexican joint near me that I can stop by for a decent taco when I have a hankering...

Nor have I found a good pizzeria near me that serves half-way decent pizza. I tried Vito's after reading some raves on message boards, but to no avail. 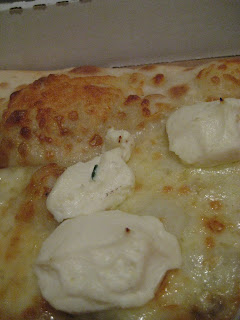 My dinner companion and I tried several types of pizza, including the Margherita, which was ok and the white pizza, which had mascapone cheese, and was the best, in my opinion. Maybe it was the novelty of pairing mascapone cheese with pizza. One could say it was a bit of cheese overload but I personally can never have enough cheese so it wasn't a problem.

The pesto one was soso, as was the one with sausage and pepperoni. I usually don't like meat on my pies, so that may have biased the ranking.

I still like the Pizzeria Mozza for high-end, but in search of an equally juicy and flavorful Margherita topped with fresh basil for a fraction of the price.
Posted by ironchef442 at 9:39 PM No comments:

Jar: Rib-eye and Fries for a Special Occasion 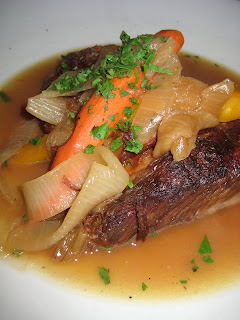 Because I was good on Thanksgiving day and didn't stuff myself silly with, well, stuffing and such (more on my Thanksgiving day meal later), I didn't feel bad having an uber hearty meal at Jar, complete with fat, bloody steaks and tender, juicy pot roast.

I had read about this "signature" pot roast, so although my companion and I weren't huge pot roast fans, we ordered it. It was definitely one of the best pot roasts I had ever had (albeit in my limited pot roast experience) although a tad on the salty side. The carrots and onions were well integrated into the roast, which was nicely seared on the outside and tender and juicy on the inside. I also liked the horseradish cream it came with, that gave it a nice balance in flavor with a slight kick. 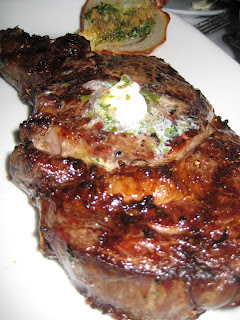 My favorite item out of all the things we ate was undoubtedly the rib-eye steak, which was all it was cracked up to be. It was perfectly cooked medium rare -- nice and browned on the outside and crispy on the edges and bloody and soft on the inside. We had a choice of sauces so based on posts we got the lobster bearnaise (because there's always room to get more luxurious and decadent) and the peppercorn sauces. The lobster one was far too rich, even for this butter and fat fiend, and distracted from the amazing flavor of the steak. The peppercorn, which was more watery with whole peppercorn spheres for some kick, was just ok. I almost didn't mind slicing and chewing one piece of meat after another, without any condiments, just pure good red as red meat. When I saw the massive hunk of meat, I didn't think I'd put much of a dent but I couldn't stop eating it, bite after bite, as my stomach would tell me I needed to stop. But my head wanted to keep eating because it was enjoying it so much. Similar to my Girasole experience with its carbonara. 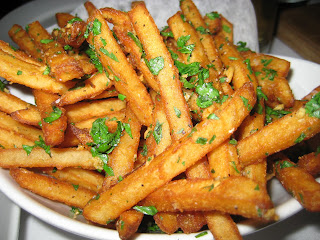 The fries were also very good, served piping hot and super crispy. It didn't hurt that they came smothered with garlic bits and parsley, imparting even more flavor and textures. The only thing is I wanted to leave room for the star of the show -- the rib-eye -- and not fill my stomach unnecessarily with these carbs. But then my dining companion and I concurred that fries don't keep very well. What better excuse? 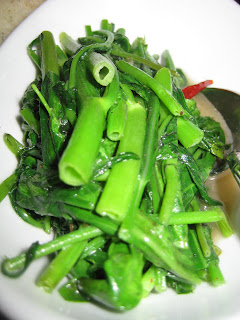 We tried to be semi-healthy amid the heart attack on the table. We got the stir-fried water spinach, which was good and reminded us of the great Chinese restaurants that serve this (Din Tai Fung came to mind) but nothing to write home about, especially given the stellar steak sitting next to it.

A big disappointment was the crab deviled eggs appetizer, which was raved about on message posts but was so unmemorable and devoid of crab that I almost think it is a misnomer. 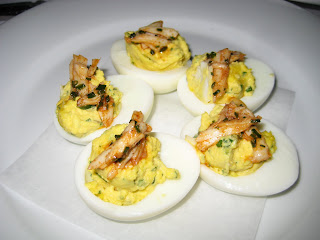 Those things were absolutely nothing special. The deviled eggs tasted flat and didn't have much flavor in them. The crab that I had hoped would add some pizazz to the quotidian egg didn't do much and at worst, even had a whiff of unfreshness to it. 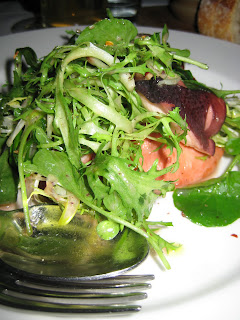 The octopus salad special was ok but nothing to write home about either. My companion is a huge octopus fiend so we tried it and the octopus was cooked well enough -- nice and soft, not too chewy. But it didn't exactly blow me away.

The bread that came with butter was good but would have been better had it been heated. The butter was salty but I like salty so it was ok.

For dessert, we had bread pudding topped with vanilla ice cream and some caramel sauce. It was good but think we were too full to really enjoy it. Portion was small so that was actually good for us so we didn't have to feel bad for not finishing it. 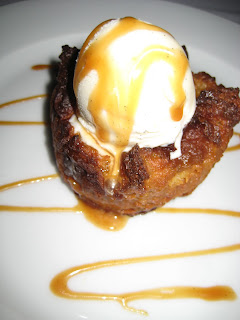 In short, I would definitely return for the steak but it's also a special occasion place, not cheap at all. We got a special deal from Open Table but still overall not an everyday kind of experience. Tables are a bit on close side but noise level isn't too bad. You're better off parking on the street since they only have valet (and I personally hate to valet).

I was torn between the Kansas City Steak that's the only dry-aged one on the menu and is a whopping $40 a pop, but once I realized the rib-eye is more marbled, aka fatty, aka much more succulent and um, yummier, it was a no-brainer. It also helped that it's supposedly the chef's favorite cut. Let's just say it had me at marbled.
Posted by ironchef442 at 1:42 PM No comments: