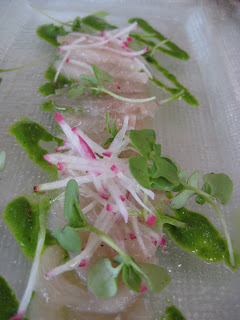 In my quest to eat more fish (it's more of a hassle to make at home), I was delighted to discover a long-time favorite that had converted itself into a seafood shop-cum-cafe in the form of Santa Monica Seafood Company. This has always been my go-to place for seriously fresh fish for my extravagant dinner parties. The small side-cafe is a welcome addition to reasonable choices on the west side for a casual, healthy and delicious meal. It also moved to a more central location on Wilshire from its former digs.

The hamachi (yellowtail) crudo drizzled with arugula pesto and lemon oil, topped with watercress and radishes was light, guilt-free and very refreshing (note: menu says it's supposed to be basil, but I got what looked and tasted like watercress -- guess it varies depending on availability). If you like sashimi, this is the starter (or main) for you. I had it as a main when I wanted something light for dinner. 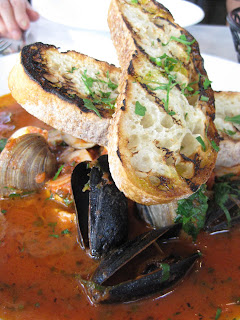 For something to warm your soul (even on "hot" summer days in SoCal), there's nothing like the cioppino, a hearty, garlicky, slightly spicy stew with clams, mussels, shrimp, calamari, pieces of fish in a tomato-y broth that's made even better by the perfectly charred ciabatta slices it comes with. Gotta love those grill marks! Dip dip onto the broth and you're in heaven.

The broth is always key -- besides the freshness of the ingredients, that is, but that's a no-brainer since this joint has that down pat -- and it was obvious that they took care to use long-simmered fish broth to impart the kind of depth of flavor only attained through slow cooking. This was my favorite entree and I liked that it could easily be shared, which I did. 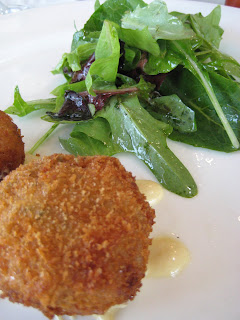 The other items were not as remarkable as these first two, but decent nevertheless. The crab cakes were just above average but I've definitely had better. I liked that they had plenty of the super pricey crab meat in them, but something about the patty mix and breaded coating were not perfect. The greens salad that it came with was a good balance to the almost-deep fried cakes. I also thought the dipping sauce it came with wasn't all that. It could be a bit spicier or something. A tad bland. 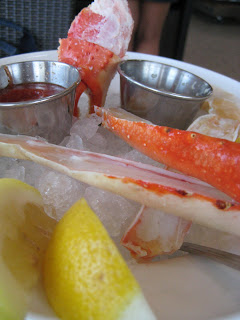 The steamed crab legs and claws that came with lemons, tartar sauce and shrimp cocktail sauce were not that great. Although my eating companion thoroughly enjoyed devouring them, I was on the fence. Maybe it has to do with the fact that I prefer some seasoning in them, a-la Crustacean, with some buttah, garlic, salt and pepper.

The steamed clams with white wine, garlic and tomatoes were good, but all too similar to the cioppino, even down to the grilled bread on top. I wouldn't order them at the same time. 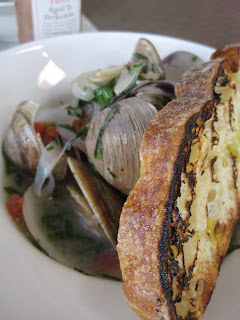 Still, the verdict is I want to return for more and to try other dishes, like its clam chowder on a "winter" day in Cali, fish and chips (ok, not the healthiest but) and its seared scallops with side salad. By the way, it also serves wine and beer, but skip the honey raspberry beer as it doesn't taste good. It also serves breakfast options, which makes it a good place for brunch as well. It gets crowded during peak hours but I'm looking forward to returning soon. Service is also good. There's also a bar if you're by yourself and a small shop of gourmet goodies selling everything from fancy olive oils to the creamiest stinky cheeses. 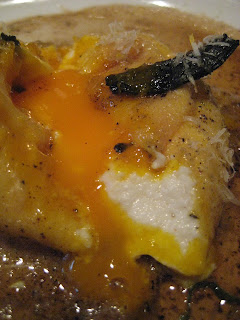 I was pleasantly surprised at how good Osteria Mozza was. Yes, I had my doubts for its connections with Nancy Silverton of La Brea Bakery fame and Mario Batali. It was hyped but wow, the food and service blew me away.

I admit I ordered things Irene Virbina of LA Times recommended, like the egg and ricotta-filled giant raviolo that comes in one and the grilled quail. Both were fantastic, especially the ravioli whose egg oozed out when I poked it. Runny, creamy and the ricotta cheese complemented the browned butter so perfectly. This combo was genius.


The grilled quail was also fantastic -- moist, wrapped in pancetta, charred nicely outside and topped with sage and honey. It didn't taste too gamey and the meat was very tender. One thing that's a bit different is it has a "mozzarella bar" section on the menu where you can sample buffalo mozzarella, burrata, a hybrid of mozzarella and ricotta and all sorts of funky mozzarella served with braised artichokes, pine nuts, currants and mint pesto, which is the one I had.

Because Silverton is a famous bread lady, I had high expectations for its complimentary bread. I was not blown away but was not disappointed either. It served little pieces of sliced baguettes topped with goat cheese, a tapenade-like paste and crisp basil ribbons.

The linguine with clams, pancetta and spicy Fresno chiles was not very spicy, despite what our waiter said about the kick. My dinner companion doesn't eat pork so had to skip the pancetta or put it on the side and that clearly took away from the dish. It's like removing the soul out of a dish, in my book. To be fair, our waiter did warn us that it wouldn't be as good without the pancetta. 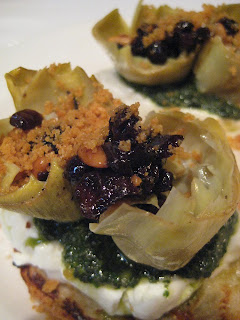 The regular service as well as the wine service were excellent. Pleasant and helpful but not solicitous. The manager checked in on us and sommelier tried very hard to find me a good red but alas, it wasn't to be. I had an issue with my palate that night so skipped the wine. This didn't take away from my meal, however.

The desserts of chocolate cake with almonds and cake, berry and brittle concoction were good but nothing to write home about. The chocolate cake was far better than the latter. As you can tell, I like oozing things, and much to my delight, this cake's interior had some serious oozing chocolate action going on. Candied almonds helped to give it a bite.

I would most definitely return to sample more. The only thing is that I'm not crazy about the weird reservation policy of only being able to book exactly a month in advance and the 15-minute wait policy even if you're calling to tell them you're coming to claim your table. Not to mention the annoying wait and automated answering if you call the restaurant. That needs to be changed immediately! 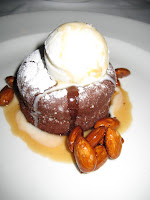 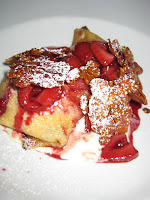 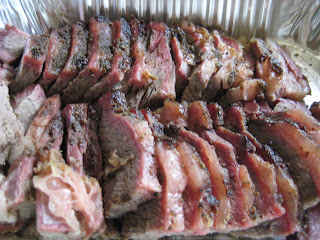 Update: you can now buy your very own bottle of this crazy good sauce, but it's only available at the large public events it caters. I'll let you know when it begins selling it online on its site. Enjoy!

Meat, meat and more meat. If you're not a proud carnivore, you may want to skip this post. The first time I had a taste of Park's Finest was at Tuesday Night Cafe, which was MC-ed by founder and BBQ-master extraordinaire, Johneric Concordia himself. He brought some chicken that tasted good enough, but it wasn't until I had a dab of the fantabulous barbecue sauce that I became an instant groupie.

It took me exactly two seconds to think of an excuse to cater a Park's Finest BBQ party. 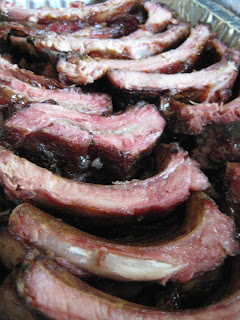 We got the pork baby back ribs (left), ribeye roast, chicken and sausages for meat and the corn bibingka, of course. They threw in a special cut of beef rib meat (above) they called dinosaur something but all I have to say is that it was my favorite -- cooked medium rare and all.

The food came on time and piping hot. Everything was fantastic. The only thing I would say they could have done better was the chicken. Maybe because the chicken pieces were smaller and uneven in size, the smaller chicken legs, in particular were a bit dry. BUT, nothing that couldn't be remedied with some smothering (more like dunking, drowning...you get the idea) of that lovely barbecue sauce with a Filipino twist that contains sugar cane, pineapple, soy sauce, garlic and...he'll have to kill you first to divulge the secret. When asked, he once famously said, "unicorn blood." No offense to animal-lovers. One of the hosts also famously wrote that she wanted to drink the sauce by itself. They should really sell this stuff in jars. 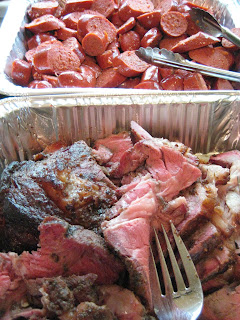 The sauce makes this barbecue. Don't get me wrong. The meats are great but significantly enhanced by the addition of this sweet, spicy, garlicky, smoky delight that you likely have never tasted before. It's that transformational.

The corn bibingka was sweet, soft, grainy and toasted slightly on top -- in short, the perfect accompaniment to the meaty stars of the barbecue.

The host and I made some sides, like corn on the cobb, peach and greens salad, roasted curried fingerling potatoes, cole slaw, pepper and cucumber salad, to balance out the heaviness from the meat. It didn't necessarily stop us from overeating but it certainly helped to temper the meatfest.

Still, we could have fed an army with the copious amounts of meat and food that was available. Not to mention our amazing array of cocktails, courtesy of our resident mixologist who made the best mango and strawberry margaritas, mojitos and caipirihnas. 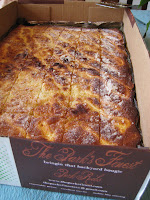 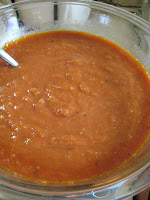 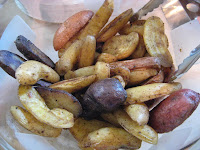 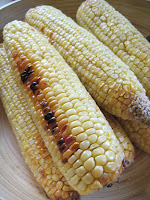 You can find out where the name, Park's Finest, came from and the full menu on its site below. It also has pork tenderloin, beef ribs and much more. This BBQ is not to be missed. Cater it for your next work or play event.