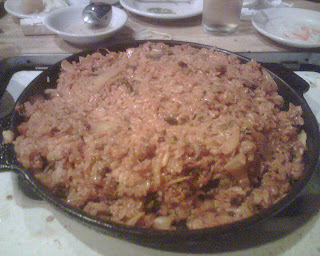 Whenever I get a hankering for perfectly seasoned kimchi fried rice with a crispy crust on the bottom, I head straight to Dong Il Jang, a BBQ-cum-sushi place (but the sushi part you can ignore) in Koreatown that serves positively the best kimchi fried rice around with just the right level of spiciness, glossiness (read: grease) and chewiness. 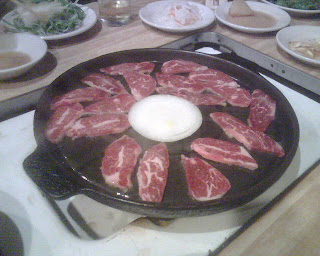 The fried rice is like a surprise present that comes at the end of the BBQ fest, and clearly the star of this meal. Order the "rosu gooey," which includes thick slabs of unmarinated ribeye pieces the size of sushi. The meat is cooked at the table with some butter spread onto the grill, alongside sliced onions that are placed at the center as if to keep the balance. 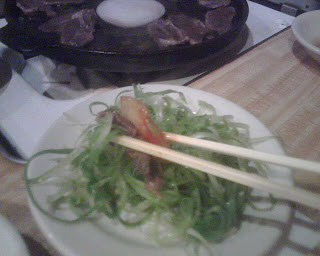 Because the meat is not marinated, the flavors come through by way of the salt, pepper and sesame oil dipping sauce and the fresh green onions to wrap the meat with. Optional add-ons include the wide array of banchan, or side dishes, that come with the meal. On any given day, the side dishes include at least two different kinds of kimchi, loosely defined as the "fiery Korean national dish usually consisting of fermented cabbage or radish, garlic and lots of chile powder." As you can see, I prefer to mix my meat with the kimchi and green onion. 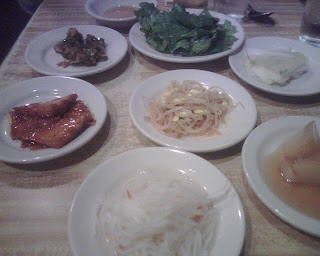 Other side dishes include kongnamul namul, steamed bean sprouts seasoned with salt and garlic; gamja jorim, sweet and salty braised potatoes; oiji moochim, spiced pickled cucumbers; odeng moochim, spiced fish cakes; moo-u moochim, pickled radish strips; and a "New Korean" concoction -- chopped romaine lettuce salad in a spicy dressing with sesame seeds. My favorite side dishes are the potatoes and salad, and I usually add the bokchoy red kimchi into my green onion wrap for the meat. Don't worry if you don't finish some of them. They will become useful later in your meal. 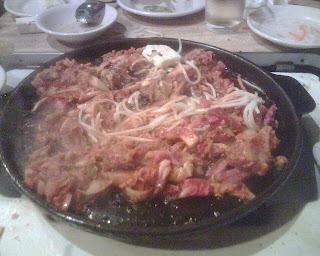 The meat wrapped in any of these combinations is good, but nothing beats the anticipation of what is about to come down when the waitress brings a small steel bowl of chopped kimchi and bits of meat to be used to make the fried rice, along with a dollup of kochujang, Korean chili paste. "Will it be standard spicy?" "Yes!" we exclaim gleefully, recalling the just-right spiciness of our last experience that did anything but overpower. 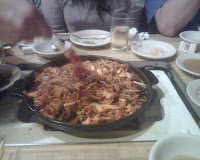 What happens next is sheer magic. The waitress pours the contents of the bowl onto the same grill the meat had been cooked on, which in turn makes a delightful sizzling sound. This may not be for everybody, but the waitress also collects leftover banchan dishes from the table and piles them onto the grill. Bean sprouts, green onions -- it's all good.

Then she adds the chili paste depending on the spice level requested and cooks the kimchi and meat some more. Then comes the three bowls of rice, which the waitress so adroitly incorporates into the kimchi mixture that all of us at the table can't help but stare in awe of her super-fast hand movements. 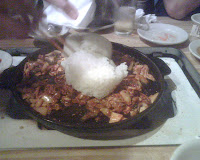 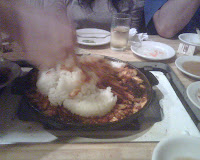 No matter how many times I go, it never ceases to amaze me how well (and quickly) she mixes the rice evenly so that the snow white rice becomes fully tinged with the deep red color of the kimchi and chili paste, glistening from the butter and fat from the meat. The result is a heavenly bowl full of red jewels peppered with seared pieces of meat and soft kimchi pieces with a hint of sesame oil. If you like to scrape the rice crust from the bottom of the pan, you must be patient and wait for about 3 minutes before digging into the rice, or else you will have no crust, or nooroongji, as Koreans call it. It's simply the best part, but you have to work for it. 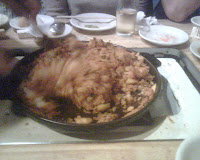 I recommend ordering the rosu gooey for 2 (minimum portion you can order) for up to a party of 3, as it's a lot of food and can get pricey. Don't forget to wash it all down with some shik-he, a refreshing Korean dessert drink of ice-cold water, rice and sugar, that is complimentary after a meal. 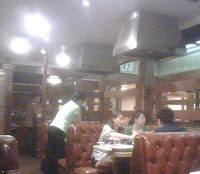 For homecooks, this dish is extremely easy to make. Sautee chopped store-bought cabbage kimchi on a pan with one teaspoon of sesame oil, add meat (or not if you're a veggie) and use day-old rice ideally, as it's drier than just-made rice. If you're a spice hound, mix in some of the hot paste and add some butter or vegetable oil to facilitate mixing. When fully incorporated, sprinkle with sesame seeds and/or green onions and voila.