I'm Moving Blogs to NJ STILL EATS: Are You In or Are You In?? 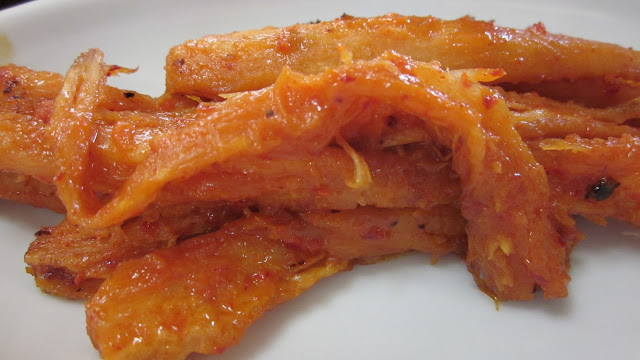 I have officially exceeded my image capacity for this domain so am launching the sequel to my original blog as njstilleats.blogspot.com beginning TONIGHT at 6pm PST with a whole new look thanks to the new blogspot features that gave it a nice makeover!

I have a ton of food stories to tell from my Korea trip and beyond so stay tuned my friends and don't forget to follow me and bookmark me (Boy, I don't think I"ve ever said that before -- bookmark me. Oh, and please add me as a favorite or should I say "please favorite me"?) again! And tell me what you think of the site's new look. I tried to modernize it and make it more visual with EXTRA LARGE images as a nod to the art of food porn. The above image is a teaser of one of the top three things I had while in Korea. Can you guess what it is? You're just going to have to go here to find out.
Posted by ironchef442 at 11:19 AM 18 comments:

Korea Roundup I: Noodles with Ice Floating and the Best Soju Pairing 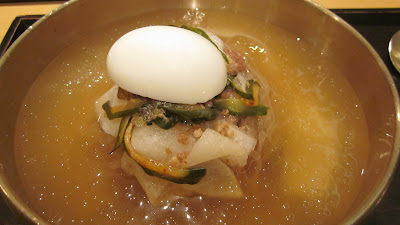 I know that for those who don't live in Korea or LA, complaining that there's no good nengmyun, or cold buckwheat noodles to be found in LA gets me no sympathy. But just like my rant on a lack of decent ttukbokki a while back, there are plenty of things that LA doesn't do well or doesn't do at all. And nengmyun is one of them. So it was with great satisfaction that within a few hours of my arrival into Korea, I got to have excellent nengmyun at Hanilkwan, an old school restaurant with tons of history that since expanded into three locations. I went to the one near Korea's "Times Square" in Youngdeungpo that is nothing like NY's Times Square but is a huge mall that has everything. 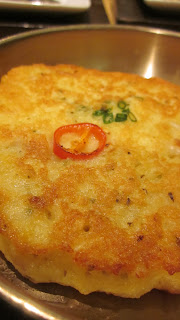 I was happy as the bowl of nengmyun was placed before me and I saw delightful pieces of frozen broth floating around the cold soup, not to mention the neatly stacked radishes, cucumbers and pear daintily topped with half a hard boiled egg. The broth was so refreshing and spot on. I could taste the meatiness of the broth that was like 50 times more complex than the ones I've had in LA. Ok, I'll stop the hating. But I can't help but gush at this seemingly simple but very complicated dish.

The side dishes were also fresh and not overly salted. The bindaettuk, or mung bean pancakes actually imparted the mung bean flavor instead of the doughy tasting ones that have added too much flour to the mix. It hadn't been reheated 20 times and smelling like old oil. It was crispy and browned just right. 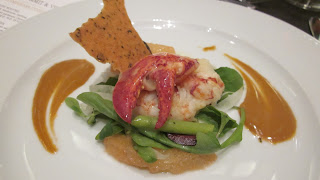 On a totally different note, I enjoyed the food at an event we had at Raum in Seoul. It's not a restaurant but the lobster starter and the lime sorbet were highlights. 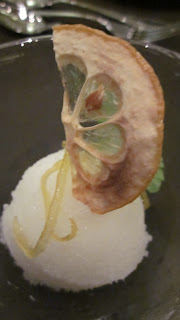 From riches to rags, I also loved Saemaeul Shikdang, which plays to our nostalgic love of old pots and rustic hole in the wall-type atmosphere and takes it corporate. I was somewhat surprised and disheartened to learn that it's actually a chain restaurant with multiple locations. Not that chains can't be good but I'm wondering whether I was influenced by this atmosphere to love the food. Still, I loved it. 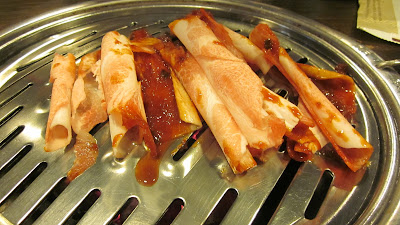 The best dishes are chadol (thinly sliced beef) smothered in spicy marinade and cooked tableside, along with kimchi jjigae, served in those yellow pots you see people eat instant ramyun in Korean dramas. The marinade was like the spicy pork bulgoki, only this was for beef. It came with shredded Korean green onions seasoned with some more spicy sauce because there can never be too much spice. 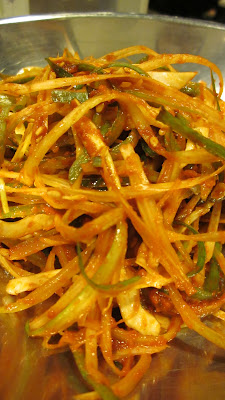 The kimchi stew with pork pieces was spicy, flavorful and perfect with a cold glass of soju. Now I don't normally crave soju or even like the taste of it, especially not the plain stuff. But the kimchi jjigae was so delicious and the garlicky, spicy meat was so juicy and perfectly marinated that washing it down with soju seemed like the most natural thing to do. I also consumed a lot of rice to temper the strong flavors. 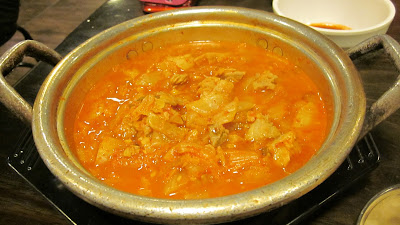 I mean look at that pot. Doesn't it remind you of those drinking scenes in dramas? "아줌마, 여기 소주 한병 더요!" ("One more bottle of soju please!") I was tempted but got an extra  공기밥 (bowl of rice) instead. Stay tuned for second entry next week.
Posted by ironchef442 at 5:58 PM No comments: