A Full Korean Meal in a Bowl 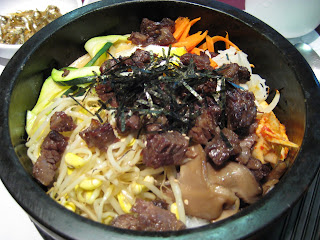 Judging by the back-to-back posts, I must be on a Korean food kick. Can't help myself. This is a quickie entry on my favorite bibimbab place in Koreatown -- Jeon Ju. It specializes in the super-hot stone-pot bowls of rice mixed with vegetables and meat, seafood, or no meat at all. You can order a non-stone-pot version that comes in a regular bowl if you don't like food that is too hot temperature-wise.

But the stone-pot functions not only as a thermos that keeps the rice and all the goodies in it warm, but it also helps to create a crunchy rice-crust at the bottom that you vigorously scrape at the end of your meal (or beginning, depending on your level of patience). If the fried egg is done sunny side up like in most establishments (not in this one -- egg comes out almost fully cooked, which takes a bit of the fun away from popping and cooking the egg), you can also use the stone-pot to cook the egg by searing it in the bottom of the pot. 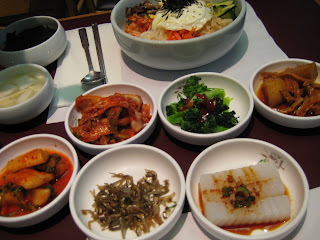 What I like most about Jeon Ju is the meat topping that comes with the kalbi dolsot bibimbab. Usually, meat in bibimbab is ground meat of dubious origins. But this is marinated rib meat that's been boned, so you only get the tender slightly salty, sweet and most definitely garlicky morsels of meat. Add some bean sprouts, mushrooms, fiery kimchi, zucchini, carrots and radishes, mix it with rice and red pepper paste (pictured below), and you have yourself a healthy bowl of bibimbab that also hits your recommended daily vegetable intake. 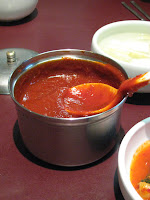 It doesn't hurt that the banchan, or side dishes are reasonably solid. They include three kinds of kimchi -- a regular nappa cabbage, radish and water kimchi. There were stir-fried dried baby anchovies, jelly topped with a soy sauce and scallion dressing, steamed broccoli with red pepper paste and stir fried fish cakes. You also get a comfort-foody sea kelp soup that is even healthier than the bibimbab. Check out the mixed bowl below. Jeon Ju is a city in Korea's southwestern Cheolla Province from which this stone-pot dish hails. Stone-pot bibimbab is hence called Jeon Ju bibimbab. 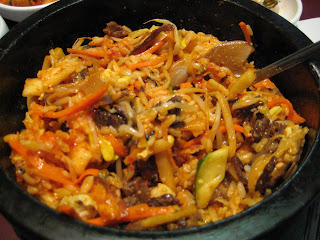 I recently saw Mario Batali present a stone-pot bibimbab dish on Iron Chef America and recalled seeing the judges ooh-ing and ahh-ing about how creative it was. Um, hello? I hope Batali gave proper credit to where he got the idea and equipment from because I missed the first part of the show. By the way, portions are big, so one bibimbab translates into three meals.

No Longer Second to Shik Do Rak--CLOSED 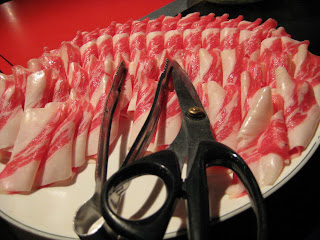 Update: this place has since closed down and been remodeled but I have yet to try the renovated joint. RIP Hanyang.

It was truly serendipitously that we ran into Hanyang again, after having written it off when it first opened a while back. At the time, this Shik Do Rak wannabe was merely that. It sought to emulate ttukbossam, the rice paper and chadol barbecue of thinly sliced meat wrapped with some green onions and spices. But it wasn't impressive.

We headed to Hanyang in this day only because Shik Do Rak was too booked as it is undergoing renovation and has much less room during the Friday night rush. Alas, we were pleasantly surprised. The meat was tender and fresh; the banchan (side dishes) were solid; but most importantly, the green onion mixed with a fiery red sauce that you dab onto the meat before you wrap it in a thin rice paper was extremely flavorful and addictive. 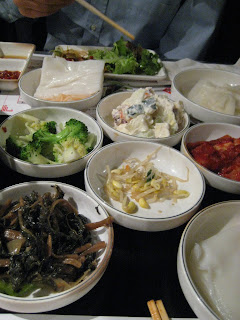 What I liked about Hanyang was that it has a chopped romaine lettuce and red lettuce mix as well as an all-green onion mix that is tossed in a garlicky and vinegary red pepper sauce that complements the meat so well I couldn't stop stuffing my wrap with this green and red mixture. The vinegar gave it a refreshing touch so the fat from the meat wasn't too heavy on the palate. Like Morangak, the ttukbossam (moniker for this kind of rice wrapper with meat) place I like in Garden Grove, it had the pickled radishes -- large round slices of radishes pickled in a slightly sweet vinegar sauce. The radishes are big enough to double as wrappers to mix things up a bit.

The only downside was the rice wrappers were too thick and stuck to each other too much so it was cumbersome to peel them off. 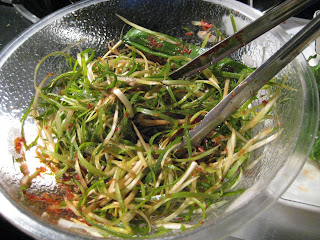 It helps to have solid kimchi, the signature spicy fermented dish and other side dishes such as potato salad and the rustic oogeoji namul, a dark brown leafy vegetable seasoned with garlic, salt and sesame oil that tastes just like the countryside. The mushrooms and sweet potatoes on the grill were a nice touch. The prices weren't bad either. It wasn't as cheap as Shik Do Rak but came close. All that meat and side dishes followed by a meal of rice, savory egg custard and fermented soybean stew for about $30? This could feed a family of five. 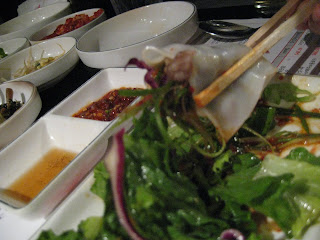 Cold Noodles with Hot Broth on a Hot Day 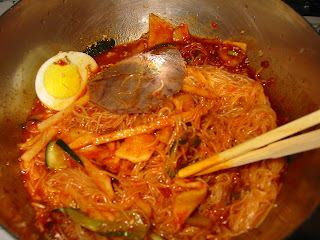 I'll say it right off the bat. I don't go to Chilbomyunok for its nengmyun, the cold, soupy buckwheat Korean noodle dish that is classic summer food. I go for its deep-flavored, most comforting food of all times -- yooksu, literally translated as beef broth.

It would be a misnomer to call it mere beef broth. The yooksu here, which the restaurant uses as a base for its nengmyun, is so complex and delicious that it makes up for the average nengmyun and banchan, or side dishes. 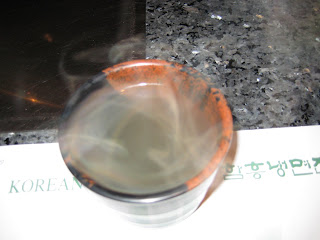 It's nothing pretty to look at, but the minute you slurp its perfectly seasoned, warm goodness, you can't get enough. Before you know it, your noodles have arrived. The curious thing is that if the nengmyun uses the same broth base, then why is it that the flavors are skin-deep compared with the broth separately? The only explanation is that they dilute the broth significantly. Sometimes I order the beet-red bibim nengmyun (above) as opposed to the less spicy mool ("water" as opposed to the "dry and mixed" kind) because I think it's harder to the get the mool nengmyun right. 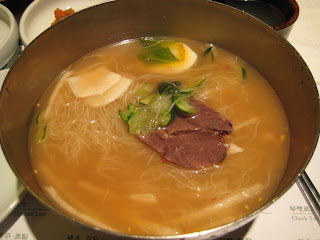 I have yet to find a nengmyun place as good as those in Korea (Think Kobaksa Nengmyun). Perfect broth (seasoned to taste with mustard and vinegar) with chewy buckwheat noodles, half a boiled egg, slices radishes, crunchy Asian pear slivers, cucumbers and a few slabs of meat. Now that was summer in a bowl. Sometimes I actually miss those hot, painfully humid summer days in Seoul. Even the monsoon season. But I digress. The bibim nengmyun doesn't have as much soup/broth and basically comes "dressed" in a spicy and slightly sweet red pepper sauce with the same ingredients that go into the watery version. When it's good, you won't care that you've developed a red moustache around your lips from the spice. 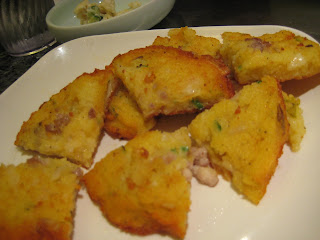 Ok, so it is one of the better places among the slim pickings, but not sure that's saying much. To be fair, their banchan of potato salad, zucchini, radishes, and especially the onion and greens salad were decent. The bindaettuk, or mung bean pancake, is a bit too greasy and diluted (not enough mung bean in the patty mixture) like most Korean restaurants. But it's crispy and does the trick if you're hungry.

Skip the dumplings. The meat filling tasted too strong.

All told, the broth makes a visit worthwhile. Check it out. They also serve barbecued meat at the table but I would go to other specialty places like Soot Bull Jeep or Park's Barbecue (bulgoki only) for that.