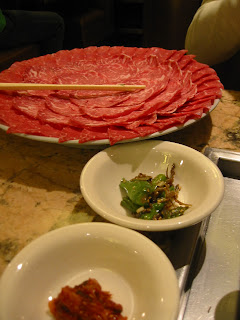 As a shabu shabu lover, I find it inconceivable that LA doesn't yet have a good and affordable place serving this flash-in-the-pot comfort food. I had to walk out of Kagaya in Little Tokyo because it was too pricey and walked away from the popular Shabu Shabu House in the Japanese Village because the wait was at least 30 minutes on a good day. The all-you-can-eat place I tried in Little Tokyo's Weller Court was ok but the sesame sauce was mediocre and didn't even have a proper curd-remover. It's sad that my favorite shabu shabu joint in terms of taste and value is Shabu Sen in San Francisco. I recently found solace in Seoul Garden in Koreatown for some Korean-style shabu shabu -- or "Genghis Khan" as Koreans call it. But more on the origins of the name later. 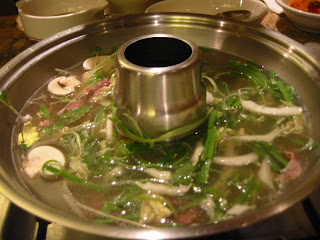 "Genghis Khan" still involves cooking razor-thin slices of rib-eye in a boiling pot of water at your table, but is different from shabu shabu in many aspects (although equally satisfying). Genghis Khan uses seasoned beef broth to cook the meat instead of plain water (or flavored with dashi, or kelp), so there is a lot of flavor even before dipping into the accompanying sauces. There is only one type of sauce (no sesame sauce), a slightly sweeter and almost garlicky version of ponzu sauce, a mix of soy sauce with citrus flavor. My favorite part is the hefty bundle of chopped cabbage, sesame leaves and green onions to be cooked and eaten with the meat dipped in the sauce. Every morsel of meat is paired with stringy veggies splashed with a tangy, salty and slightly sweet sauce. It's a brilliant combination. The sesame leaves add an earthy bite to the pairing that is complemented perfectly by the citrus-y sauce. 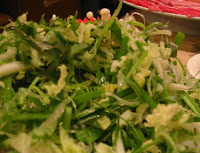 Other sides to cook in the hotpot include tofu, mushrooms, fishcakes and root vegetable jelly that the waitress swore would improve my skin. Not withstanding its beautifying effects, the jelly was tasteless. The chunky udon noodles added after the meat is gone was nothing special. But wait. There's more. There is a bowl of rice, one raw egg and some toasted seaweed strips that our waitress promptly mixes into the donut-shaped pot after she drains most of the broth. This concoction turns into jjuk, or porridge, which I didn't love. In Korean Genghis Khan places, this kind of "finale" porridge is usually made with tiny chopped vegetables such as carrot, sesame leaves and green onions. I wouldn't have the porridge next time. Besides, it was too much food for two. Two orders of rib-eye Genghis Khan could easily feed three if not four. 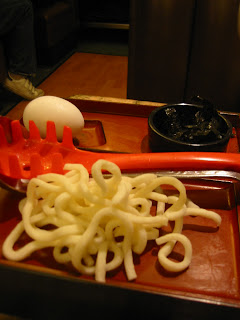 Genghis Khan is, of course, named after the man himself circa 13th century Mongolia. It is said he fed his troops this protein-packed meal because it was quick. Japan reportedly adopted the dish in the 20th century and named it shabu shabu ("swish swish") after the sound of the meat cooking in the water, but it seems like many cultures have some variations of hotpots where thinly-sliced meat is cooked. Japanese shabu shabu joints offer alternatives for non-red meat eaters such as chicken or seafood and Seoul Garden does too. I haven't tried other options but I daresay some things simply shouldn't be messed with. The banchan, or side dishes, were solid. It had been a while since I had had myulchibokeum, or dried baby anchovies pan-fried with green chili peppers in soy sauce, sesame seed oil, corn syrup and sprinkled with sesame seeds. It's salty, sweet and crunchy all at once, not to mention nutritious. What's not to like? It really tastes better than it sounds, as does sliced pickled cucumber seasoned with red pepper flakes and mixed with green onions. The kimchi, spicy fermented cabbage (or radish, green onion, cucumber, to name a few kimchi variations) that is Korea's national dish accompanying every meal, is especially important here because the meat needs something to counterbalance its, well, meatiness. The cubed radish kimchi, or kakdugi, was better than the regular cabbage kimchi. 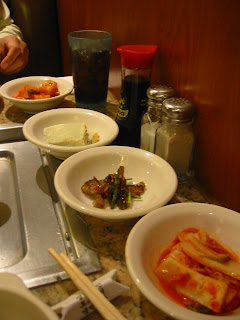 Genghis Khan novices need not fear. A section of Seoul Garden's wall prominently displays step-by-step instructions in English and Korean on how to enjoy the experience. There is usually a wait after 6pm and a very long one during peak times (7-8pm on Fridays and weekends). It's not cheap -- running about $25-30 per person including tax and tip, without drinks.

You didn't like JJUK? That's too bad..I usually leave extra room for the "finale" by ordering 1 order less than the number of the party. You must go again with me! :p

I liked the jjuk (porridge) too. I missed having sesame sauce that you get at Japanese-style shabu shabu places; maybe that's the Japanophile in me.

That said, Seoul Garden is a solid option. Another option is Boiling Pot in Pasadena for the Japanese version

Calling all genghis khan or shabu shabu eaters, what's your favorite place in the L.A. area?

Why is good Shabu Shabu so hard to find? It's a mystery to me. It's meat, water, and sauce -- and the amount of meat you get in terms of weight has got to be fairly small. My favorite has still got to be the $10/dish place in Little Tokyo with plastic plates (that I think shut down). High flollar value.

tried Shaab on Raymond in Pasadena tonight and I wouldn't go back for shabu shabu. the sesame sauce was off. we tried Vertical wine bar across the street, on the other hand, which was nice and very promising. stay tuned for more on Vertical.