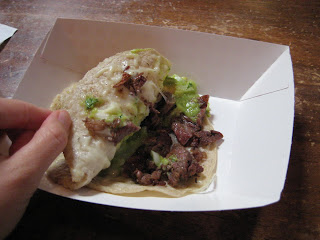 So I discovered mulitas in La Taquiza near USC last week, first described to me as "a quesadilla on steroids." Well, I went, I tried and I'm officially hooked. I know it's been around forever so it isn't earth-shattering news, but it was exciting to learn more about Mexican cuisine (anyone know whether it's a regional thing?). I couldn't find much information on it online so I can't tell you much about where it comes from. Even some of my Chicana friends didn't know what they were.

Suffice it to say that they were crispy on the outside, warm and hearty on the inside and a bite combining both, well, divine. I got the carne asada mulita with guacamole inside. The piping hot concoction comes with cheese, little chunks of grilled meat and a spread of guacamole -- all sandwiched in two delightfully toasted corn tortillas.

It's only $2.25 but hearty enough for a meal. I washed it down with some jamaica, my favorite Mexican drink. My only regret is that I didn't get the al pastor mulita. The shrimp and fish mulitas -- the latter coming batter-fried (yum) -- also looked like winners.

I'll definitely be going back for more. It serves all the other stuff one may look for, burritos, tacos, etc. For now, I'm going to sample all the mulitas I can get my hands on. The roasted something salsa was nice and spicy, adding a balanced kick to my mulita.

I've never heard of a mulita before. It just sounds like a quesadilla with carne asada in it. The picture makes me hungry. lol

Sounds as good as the chili-cheese carne asada fries I once enjoyed: http://www.ericarios.com/?p=137

Eric loves mulitas - they have them in Tijuana where he spent his summers. I had never heard of them until he introduced me to them a couple of years ago.