Coast to Coast Dining Guide for Korea I 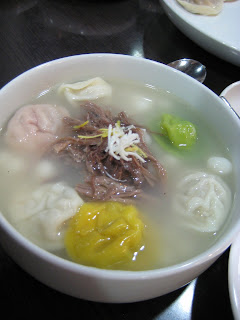 Since there were too many good places, I'll do a roundup of all the best eateries I experienced during this Korea trip in several installments. Most restaurants don't have Web sites so I'll link them to Korean blogs for those of you who speak Korean or just want to see more pictures.

Jaha Sonmandoo's specialty is dumplings. The restaurant is a converted house that sits on top a hill overlooking a beautiful view of the neighborhood near the Blue House. It's a bit tricky finding it but the trip is worth it. I had pyunsu, which are square dumplings containing beef and what sets it apart is it contains crunchy strips of cucumber, which is very refreshing and provides good texture. 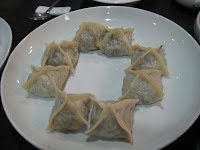 The mandoo soup was a nice bowl of beef broth with large and round mandoo with some variation in color depending on what they added to the mandoo skin. I'm not sure what they add to the dough but it's likely pumpkin, spinach or strawberry water. The most memorable thing about this place was the combination with its just-ripe kimchi because it went so well with the garlicky and meaty taste of mandoo. 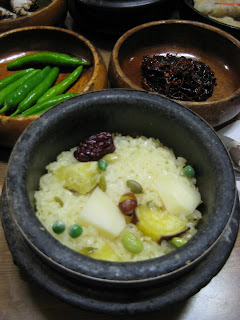 I traveled to Seoraksan by the East Sea to get some air and enjoy one of the most gorgeous foliage there is. Well, it was a bit early for foliage but I still got my share. Besides, the food and company were superb so I wasn't complaining. One of the first things I did when I arrived in Korea was to search religiously for food guides since I hadn't been back in a while. I wasn't disappointed. My first stop was, interestingly enough, not from any of the food guides except by our hotel's recommendation -- an impromptu find whose name escapes me (I think it was Seorak Sketch). It was jungshik, with a huge spread of side dishes and my personal favorite, the piping hot rice in a stone pot topped with all these goodies that are good for you -- chestnuts, jujubes, gingko nuts, etc. 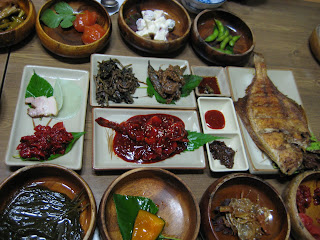 The best was yet to come. We had excellent Korean-style Chinese food and a cornucopia of perfectly charred charcoal-grilled fish varieties the next few days. 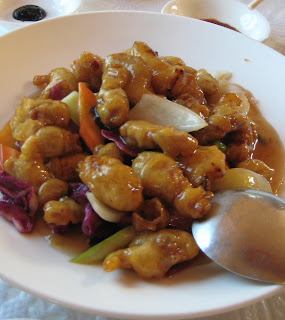 Behold this perfect platter of crispy morsels of tender pork smothered in a sweet and sour sauce that has just the right amount of tanginess and sweetness. It's the classic tangsuyook and I daresay it was one of the best I've had. The restaurant, Wangbu, was originally in Seoul's trendy Samsungdong but its urban owners decided to move to the countryside where the air is better. I suspect the batter probably had corn starch to get that kind of ultra-crunchy texture. The sauce didn't drown the airy pork pieces but complemented them perfectly. 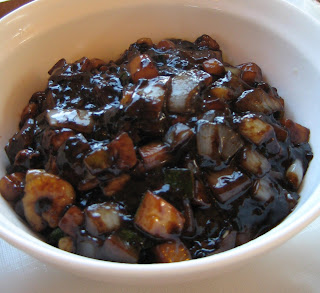 The even more classic Korean-style Chinese dish, jjajangmyun, noodles topped with jet black, glistening black bean sauce. The sauce had the usual zucchini, onions and pork. Samsun jjajang as opposed to Gan jjajang comes with shrimp and squid, but I prefer Gan jjajang for its simplicity. The noodles were chewy and I could taste the black bean flavor in the sauce. Many restaurants in Korea and L.A. mix too much caramel into the sauce to sweeten it and make it taste nasty, but Wangbu's sauce was just right. 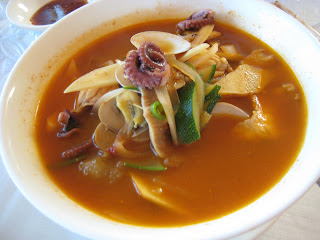 I ordered the jjampong, a spicy seafood noodle soup that came highly recommended by my trusty guide book. The jjampong was definitely spicy in a good way. Even as a jjajangmyun person, I enjoyed it for its fresh seafood flavors and got my daily intake of vegetables.

The view wasn't bad either. 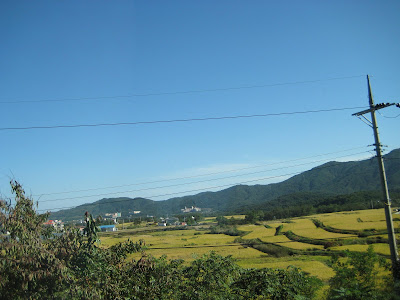 A real find was this true hole-in-the-wall smack in front of the Seokcho port that you can only get to through the narrowest of streets (no SUVs allowed). I mean, check out the contrasting view from this joint. At the busy dinner hour of around 7pm, 88 Sengsun Gooi was the only restaurant along the waterfront that any customers. I also noticed this was the only restaurant serving cooked fish as opposed to hoe, or sashimi, which Koreans love to consume near the ocean (live! straight from the tank!) but I'm not a huge fan of. Being a sushi/sashimi snob, the way the fish is cut in most Korean restaurants just doesn't "cut it" for me. 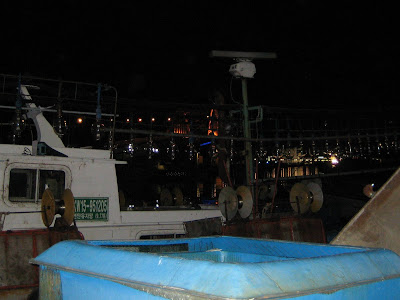 Each tiny table was equipped with a smoke absorber that slowly comes down to cover your tableside grill as soon as you sit down. The thing to order is mixed fish, which includes about half a dozen types of fish including sardine, squid, a flat gajami and the super oily mero, among others that I can't find translations for. 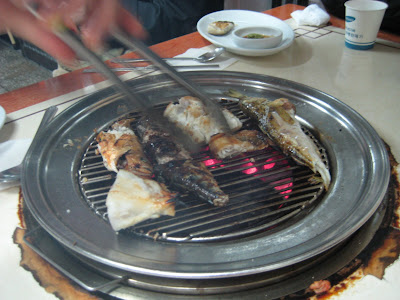 The fish was incredibly fresh -- so fresh that all it needed was salt and some serious charcoal to char it to perfection. Sampling a variety of fish was such a treat and for those who like spicy, the restaurant offered some soy sauce and wasabi as a dipping option. I tried both and while I appreciated the simple flavors of the fish seasoned only with salt, there was something to be said for the dipping sauce. I do like salty. I highly recommend this place.

Back in Seoul, I had excellent home-made bulgoki courtesy of HB. These stir-fried lovelies marinated in soy sauce and garlic, among other things were made even better by the addition of glass noodles and oyster mushrooms. Thanks HB! A recipe that I will definitely steal. 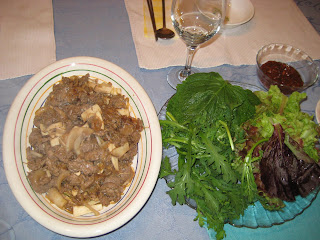 You may have to call most places to find them.

Good food and good company, what more can you ask for?

You have to come back, girl...