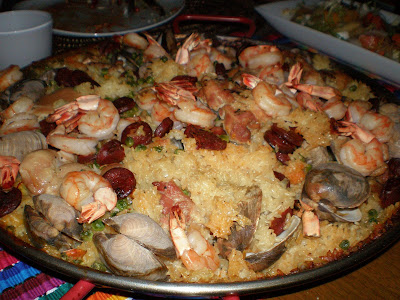 What better time to whip out the Sangria and paella than the end of the year, the supposed festive time of the year? I was never a big fan of the holiday madness but my partner in crime and I just wanted an excuse to make simple fare with lots of wine flowing and Spanish food seemed to fit the bill. It definitely was not inspired by Spain On the Road Again, that annoying PBS show that should really be dubbed Beauty and the Beast. First of all, it's not really a food show because the footage of Mark Bittman canoodling with eye candy in the form of a gorgeous Spanish woman young enough to be his daughter around Alhambra is longer than a two-minute meal they have. The other eye candy is Gwyneth Paltrow driving around with Mario Batali in a convertible making the car sponsors happy. I mean, she doesn't even eat meat! Hello? The only redeeming part was the episode where they all go to Albert Adria's (Ferran Adria's brother) joint Inopia in Barcelona for a positively amazing-looking Spanish feast. 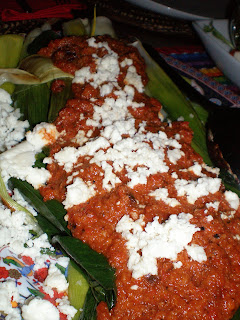 As for drinks, we had Sangria, Cava and red wine. 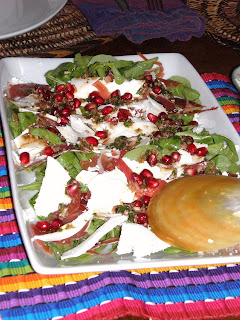 Out of the dishes I made, I enjoyed the ham and arugula salad the most because I usually find salads very boring and this one was both interesting and flavorful. It also met my strange criteria of cooking a first-time ingredient -- and ricotta salata took the prize. I don't like ricotta cheese in its gooey, watery form (let's face it -- we have it because it's good for us). But this hardened, dry version was wonderfully dense, clean-tasting and complemented the salty serrano ham, nuttiness of the arugula and tanginess of the pomegranate dressing perfectly. The ham could have been softer and better quality but it sure saved me a trip (and more) to the Cheese Store in Beverly Hills. Interesting factoid: it's Suzanne Goin's recipe of Lucques and AOC fame although I'm not a big fan of her restaurants. 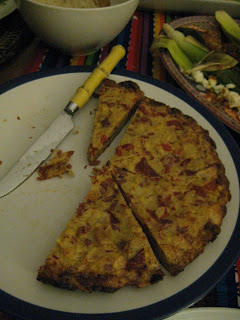 I also liked the nuevo estilo tortilla espanola made with potato chips (and piquillo peppers and ham) but I think the downfall for this dish was that I premade it too much in advance so the egg part was too hard by the time we reheated it. It was a bit too salty for me as well. After all, potato chips are super salty and even though I didn't add any salt, the serrano ham bits added more saltiness and the result was sodium overload even for a salt-lover like me. 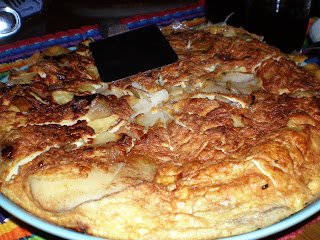 The classic Spanish omelet version (left) was clean and simple. I really liked the broiled leeks with the wonderfully nutty (from the almonds) and smoky (from the roasted piquillo peppers) romesco sauce. I fondly recalled a great No Reservations episode where Spaniards tossed a bunch of leeks in their skins on a massive grill and later delightfully peeled the skins to reveal a perfectly cooked beauty that they dipped generously with romesco sauce and just stuffed into their mouths with their hands. Primal eating at its best. 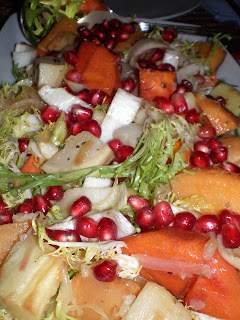 The unequivocal star of the evening was the paella. It's always a crowd-pleaser to begin with, but think juicy chicken thighs, meaty clams, pale pink shrimp sprinkled with my personal favorite, chorizo slices. It was made on a barbecue grill after browning the chicken on a skillet, which not only gave it a slightly smoky flavor but also delivered the best part of making rice on a pan -- the crunchy, toasted bits that form in the bottom that you must scrape with all your God-given strength (and so worth it).

We made sure to balance out the meatiness with some vegetables and the root vegetable dish (pictured above) was just that. It's decidedly non-Spanish but I had made it before and it's such a winter dish that I had to serve it. It includes rutabagas, turnips, parsnips and carrots that have been roasted and become incredibly sweet in the process. Then tossed with some juicy and sweet fuyu persimmons, caramelized shallots with some oil-based dressing tossed with some Belgian endives and frisee. The icing: blood-red pomegranate seeds adorning the dish like jewels. They make a great garnish for salads and entrees and have such a tart taste and unbeatable texture (pop!) when you bite into them. 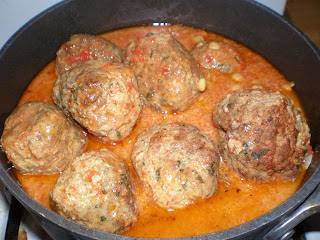 There were certainly some misses. I thought the lamb meatballs were far too dense and needed some oil to be added in the patty mixture. The yogurt sauce ameliorated the dryness but not by much. It's Nancy Silverton's recipe but as much as I love her breads and pizzas, these didn't do the trick for me. The tuna croquettes were a disaster. Maybe it was my use of whole wheat flour and lactose-free milk that threw off the recipe. 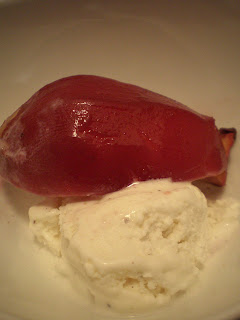 We finished the meal off with pears poached in wine and other goodies topped with vanilla ice cream. The pears were soft and tinged with the Merlot's deep red color and full-bodied flavor. All in all a good meal and we're already planning for our next one in who knows how many months. We're thinking Moroccan... Stay tuned.

PS: a special thank you to ctg for her great food styling and photos.
Posted by ironchef442 at 12:46 PM

OMG. I wish I can taste these dishes again! Everything was wonderful. Thank you our own Iron Chefs for a great Fiesta! :)

I can't believe I wasn't there. Is there a way I CAN be there? The food looks gorgeous (and ready to be gorged upon), and the writing was fun!

that was me above!

azinku, if you come for lunar new year, this and many more feasts await...

how long did it take you to prepare this feast, crazychef? i like the addition of persimmons. a very korean touch.

this one wasn't so bad b/c i had some things i had made b/f. the mexican meal w/mole from scratch was the real killer. the persimmons were in your honor :-)