Bazaar Redux: Never As Good as the First Time 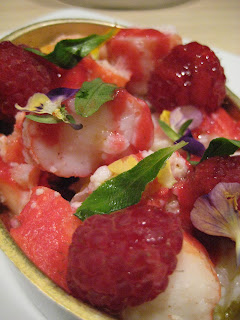 It's true. The second and third experiences at this restaurant that I mention in every other review have not been as transformational. But while the service was far too rushed and the Jamon Iberico de Bellota wasn't nearly as buttery and wonderful as that first time, I've made at least one other discovery at every subsequent visit. I can't say everything was good, but plenty of winners for sure.

On the second visit, for example, revelation came in the form of King Crab served with some fresh raspberries and raspberry vinegar. It was not only beautiful to look at but the slightly sweet and tart raspberries went perfectly well with the meaty crab flesh. 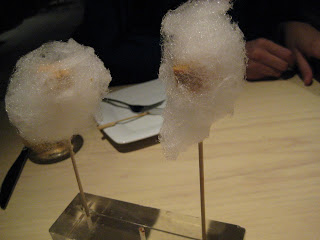 I also liked the lamb loin and his take on the classic gambas al ajillo -- garlic shrimp -- was good. I liked that the shrimps were actually large-sized. 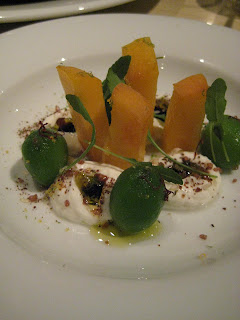 My favorite on my third visit was an off-the-menu item that our waiter curiously whipped out well into our dinner -- Japanese baby peaches (the green grape-like fruit on left) with regular Georgia peaches, Greek yogurt, baby arugula, drizzled with olive oil and an excellent vinegar using a grape called Pedro Ximenez and sprinkled with za'atar, which is a Middle Eastern mix of herbs and spices.

I first thought it'd be too sweet like a dessert but the combination oddly worked amazingly well. The Japanese baby peaches, which I had never had, were sweet but not overly so and juicy. I scooped all the parts together and the sweetness of the fruit blended formidably well with the tartness of the yogurt. But the double whammy kickers were undoubtedly the vinegar essence and the za'atar powder that gave it all these layers that had me savor it for a while after popping it into my mouth. 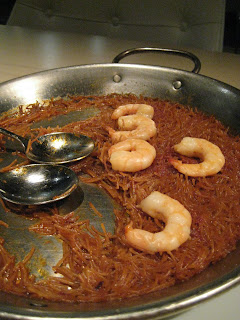 A novelty item that could have had more of a kick was the Rossejat, or paella-style pasta topped with shrimp, which was interesting but was missing sometihng -- more spice, more vegetables, or...It was cooked in seafood broth so I could taste the sea but the shrimp on top seemed to have been steamed separately and therefore didn't seem to blend in as well with the rest of the dish. And it could have used some other vegetables, shellfish or seafood.

Other good but nothing specials included seared scallops with romesco sauce (I like the classic grilled leeks with romesco better) -- the scallops were on the tough side.

The artichokes and citrus salad with orange blossom and pomegranate tasted light and fresh, just a little bit on the bland side. 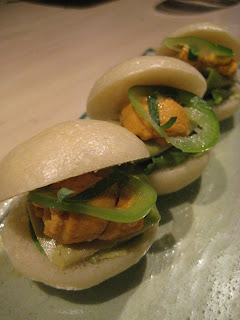 Then there were items that didn't work as well, such as sea urchin on a bun with jalapeno and avocado, the pisto (vegetable stew with tomato and runny egg that gets mixed in) and my least favorite, the tuna toro “Nigiri” with wasabi, watermelon, red wine, soy and jalapeno. First of all, the toro wasn't that great quality -- it didn't melt in your mouth like the one at Hiko Sushi. Second, the "Nigiri" was drowning in the sauce. And then there was foam. It just didn't work. Flavors didn't meld and the sub-par quality toro ruined it for me.

Our waiter suggested another item off the menu that unfortunately didn't work either. It had grilled figs with jamon Iberico (regular, not Bellota), baby arugula, crumbled toasted walnuts and that ubiquitous Pedro Ximenez reduction. 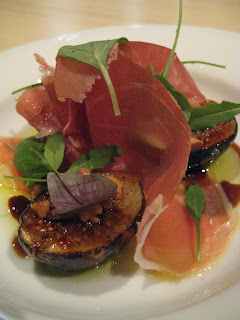 This dish sounded great on paper but the ham overpowered everything else and didn't let the figs, which should have been front and center.

I was sorely disappointed that they didn't have my favorite dessert with beet merengue, berry sorbets, pistachios and fresh berries. I had the fresh berries with a coconut emulsion on the bottom and topped with a creme fraiche-type cream that had lime bits in it. This dessert was interesting in flavor combinations but ultimately not successful. Apparently it is the brainchild of Albert Adria, the brother of famed chef Ferran Adria of El Bulli fame. I've also had the Apple Carlota, a warm apple tart with saffron sauce and milk ice cream, which was fine but not out of this world. The classic flan with vanilla and oranges was soft and yet firm enough to spoon into it with the right sweetness and creamy consistency. 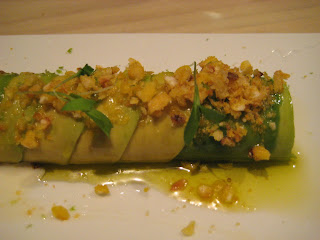 I was sad to see that the service had gone from stellar to good. While the wait staff was always helpful and chill, I thought the staff rushed us by coming by and asking to clear our plates every five minutes and some were not that great in their knowledge of the menu -- or would recite things like they had memorized it word-by-word and would utter them no matter what we said. It seemed mechanical and not well-trained to me. I recall the wonderful service I had the first time I went. I guess it's really never as good as...


I would return (in fact, I am returning this weekend) but will try some things I haven't yet, such as canned scallops or sea urchin and Norwegian lobster, to name a few. Stay tuned for another installment of...njeats goes to The Bazaar once again! By the way, the cava rosado was the bomb. Skipped the sangria and it was still good.