Cork Bar: Go For the Wine, Stay (and Return) for the Food 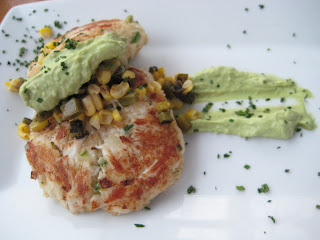 I found a good place for happy hour or just dinner in downtown LA -- Cork Bar on Grand and 12th just a few blocks east of LA Live. It's also good for pre-concert meals and you get hassle-free, free parking to boot.

It doesn't feel like a bar per se -- more like a wine bar that has really good food. Although I like wine as much as the next glutton, I'm no wine buff. Still, I would return just for the delicious if not expensive crab cakes, creamy and luscious mac-n-cheese with a slight kick from pasilla chiles and its hard-to-beat $2 a pop specials on Tuesdays where the chef uses customers as willing guinea pigs to try out new dishes. Outdoor seating is great in the summer before it gets too crowded. 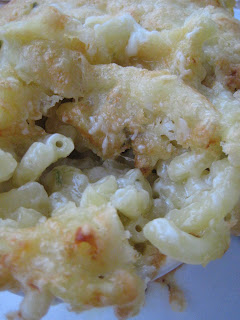 The crab cake was perfectly seared and very meaty, thankfully, since it cost $17. None of that doughy, breaded stuff distracting us from the glorious white flesh. It was advertised as "spicy" crab cakes and truth be told, they weren't very spicy but I didn't hold it against them. They came with an avocado crème fraiche and topped with a cactus and corn relish that gave them a nice sweetness.

The mac-n-cheese mixed three kinds of cheeses, including the best melting cheeses that also happen to be very flavorful -- fontina, cheddar and asiago. Roasted pasilla chiles did give it a spicier dimension but these chiles are usually fairly mild, and given chef seemed to have gone easy on the chiles here, I could have used more but was still content with this dish. 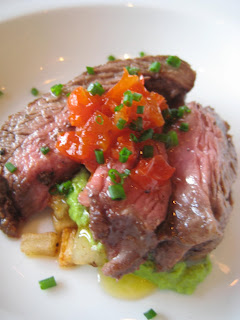 The $2 a dish on Tuesdays for trial dishes is a fantastic deal, and they serve them until they run out. On a recent Tuesday, that dish was, lucky me, slices of beef tenderloin cooked medium rare on top of a green sauce and some turnips that seemed to have been pan seared. The relish on top was chopped chives and some tomato-y mix. I obviously didn't pay as much attention to the rest of the dish but the "meat" of the dish was superb. As a side dish, this came with a little cherry tomato and raspberry drizzled with some kind of balsamic reduction whose sweetness really complemented the tartness of the berry and the slightly sweet and slightly acidic tomato.

I liked it so much I think I must have had at least six orders. Honest to God. You can't go wrong with $2... On second thought, you can go wrong but not here. 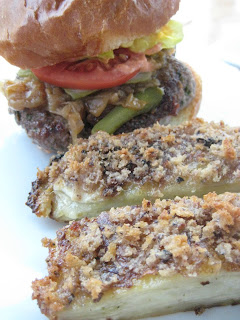 I also liked the various soups they serve daily -- the potato one was excellent, as was the carrot soup. The soups are definite keepers.

The white bean puree toasts were also nutty and it felt good having something that's healthy and a joy to your palate.

I've also had the endive, cashews and grapefruit salad with a lavender-honey dressing that was very refreshing and just the thing for a hot, summer evening.

One thing that could be improved is the burger. I admit I'm a big time burger snob, but for an eatery of this caliber, the burger should have a juicier and bloodier patty, a softer yet sturdier bun and the toppings should be more interesting. I mean, if you're going to do potato gratin pieces instead of humble fries, the least you could do it fancy up the burger with some avocado or arugula or something. Ok, I'm comparing it to the gold standard -- the Houston's burger again (By the way, I discovered that the same restaurant group owns Bandera, which has an equally royal burger).

Service also left some to be desired, especially during the later, busier hours. We were told it was because of a large party in one corner but don't think that should be an excuse not to check up on us for a long time and not giving us our food, etc.