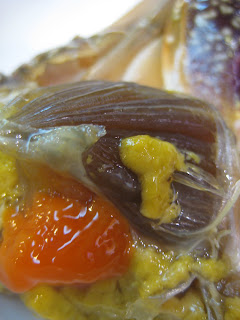 Meaty raw crab marinated in soy sauce, garlic and other spices. Usually, this kyejang is too salty from an overload of soy sauce, but this one was just salty enough for me to want to suck out all the gooey flesh out of the claws and smother some steamed rice into the crab shell filled with innards and leftover marinade to make the best finale to a keyjang meal. 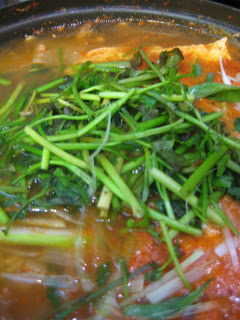 A bonus was the live small octopus (산낙지) we had as an appetizer, as they wiggled and suctioned their tentacles onto the plate for dear life to resist our chopsticks. They were hard to grab and to hold but a fresh dip of soy sauce with some wasabi and it hit the spot. Chewy but extremely fresh and tasty.

We also had the spicy fish stew that was good but not as good as the fish stew we made from the fresh taegu fish bought from a fish market near Sorak Mountain in Korea's east coast. 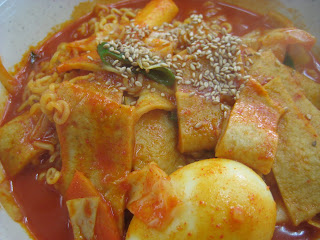 One thing I always lament is the sad dearth of good rabokki places in LA. Rabokki is like ttukbokki, the spicy rice cake dish mixed with spicy pepper paste, garlic and other spices, except it uses ramen noodles either exclusively instead of or in addition to rice cakes. I personally like it better than ttukbokki that can be pretty dense. Anyhow, I had excellent and very spicy rabokki right outside of the Pyunghwa Market in East Gate where the shopping rules. Get off at Dongdaemun Park (formerly Sports Stadium). Actually, fashionistas would probably already know how to get to the Pyunghwa Market, so the place is just outside of that market. Don't forget to get the kimbab to go with it to temper the saltiness and spiciness. 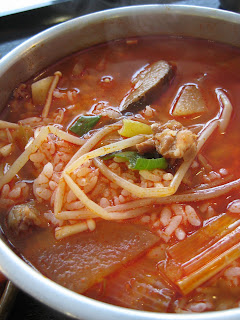 Another relevation was that the old rest stops peppering the freeways throughout Korea have vastly improved. To my delight, the food served in those rest stops (휴게소) was actually good! I had yookkyejang, which is a spicy soup of beef, bean sprouts, radishes and green onions that is the perfect meal when it's sub-zero temperatures out there.

Unlike the tasteless fish cake soup and kimbab (Korean rolls) containing sausages too bright pink for their own good (not to mention of mysterious origin) of the rest stops past, this soup was actually made from real beef broth and had some flavor.

Most of the newly renovated rest stops had decent food, so it didn't matter which one you went to. I was traveling east toward Sorak Mountain in Kangwon Province so take note. 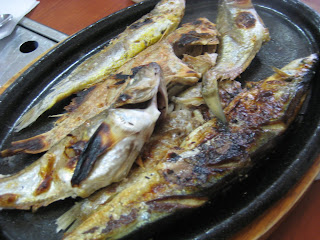 Located in a tiny town near the DMZ Museum (I didn't link to the museum itself because I had problems calling it up but it should be dmzmuseum.com) that is worth a trip, Hamheung is all about the freshest fish of the season. When I went during the winter time, it served dorumook in addition to usual suspects like the flat gajemi and the saltier jogi. Dorumook is translated as "sandfish" but I'm not convinced real translations exist. Ditto for gajemi and jogi. You're just going to have to trust me and order them. Dorumook wasn't my favorite (too many fisheggs) but the perfertly charred grilled fish platter went very well with the rice and multiple side dishes it was served with. The fish was cooked and seasoned just right and the "seasonal grilled fish sampler" must change constantly. Highly recommended.
Posted by ironchef442 at 10:14 PM