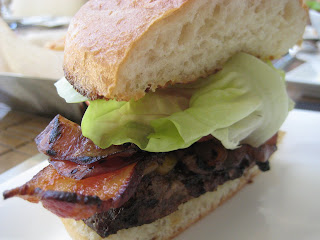 I had read about celebrity chef Kerry Simon's famous burger so ventured to his latest restaurant, LA Market, in the lavish, towering JW Marriott in LA Live. The space was spanking new, very airy with tall ceilings and showered with super bright SoCal sunlight. The food was disappointing.

First of all, the menu wasn't even online. Second, I had to send back my burger because it was overcooked. This from a so-called Iron Chef? Pu-lease. Granted, they apologized and cooked it decently (but not perfectly) the second time. I appreciated that they were willing to cook my half of the burger medium rare and my dinner mate's half of the burger medium. 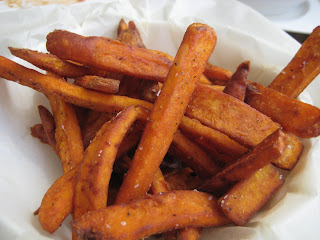 However, the patty was a bit anemic and therefore had a hard time being cooked properly. The works it came with were not impressive either. The butter lettuce, caramelized onions, tomato and two thick-cut bacon were unremarkable. The bun, oh the bun. The bread basket before our meal was so much better than this bun. This bun was dense and dry, not soft enough.

This place did get extra points for having sweet potato fries, which came out hot and good. But I wouldn't return for the burger. 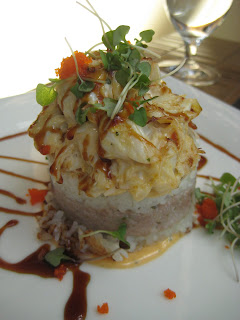 The tuna, rice and crab napoleon-like appetizer wasn't too successful. This dish represented how Asian fusion could go wrong by adding an all-too sweet sauce over it unnecessarily. The flavors and textures just didn't gel. The only thing I liked about it was the crunchy crust on the bottom of the rice patty. Don't mess with the sushi formula if it ain't broke, I say. Is it a seaweed-less roll-cum-rice sandwich? Is it a sashimi rice layer cake? Two rice patties were stuffed with raw tuna sat on a thousand island-like dressing with micro greens and fish eggs and topped with a heap of crab meat. I loved the meaty crab meat but what's with that nasty teriyaki-wannabe sauce drizzled over the iffy concoction? That killed it.

I needed to add some serious hot sauce to taste some kind of flavor.

Then there was the mac-n-cheese, which was probably one of the better dishes. 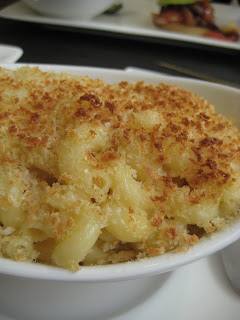 I liked its garlicky taste and crunchiness from the bread crumbs, but the top could have used more cheese. After all, isn't mac-n-cheese all about spooning a mouthful of piping hot, gooey, stretchy cheese as you dive in?

Lately I've been into reinventing leftovers in my kitchen and I was inspired by Corkbar's mac-n-cheese with chile to add canned roasted green chiles when reheating it. When the flavor still wasn't intense enough, I added some Cholula sauce, which made it better, in my humble opinion.

At the end of the meal, we were treated to a massive basket of sweet goodies, presumably to make up for the burger snafu.

That was nice of them, except neither of us has a sweet tooth at all so most of the uber-colorful sweets went untouched. 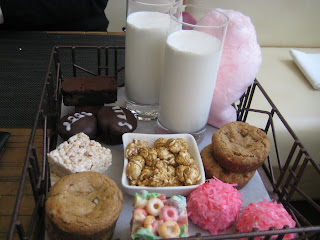 It was cute to bring all the brownies, cotton candy and caramel corn with two comforting glasses of good ol' fashioned milk shakes.

Unfortunately, everything was far too sweet for my taste. My dessert indulgences are bread pudding, tiramisu, creme brulee or some killer chocolate souffle or semisweet cake with a dollop of hazelnut gelato and caramelized banana...

But I digress. LA Market may need to develop an exciting happy hour menu for the downtown office crowd or not sure how well it's going to do.
Posted by ironchef442 at 10:48 PM