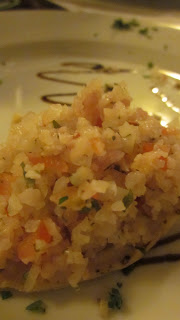 I wasn't sure what to expect food-wise in a beach town like Huatulco, but my party and I were pleasantly surprised when we ran into Onix right off the main plaza.

We liked it so much we went two nights in a row (ok, and there was a dearth of good places). 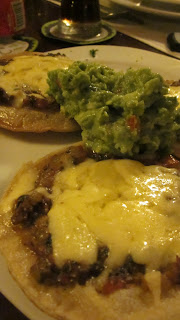 The first night we got complimentary veggie ceviche, which were surprisingly very good. I never thought I'd like vegetarian ceviche. I mean, should those even be called ceviche?!  But the mix of crunchy raw vegetables that included tomatoes, cauliflower and onions were just what we needed in the hot and humid tropical weather.

Then the oyster tostadas topped with some melted cheese surprised us once again. I don't even like oysters unless consumed super fresh and raw. These were cooked and I had never had anything like that before. Thumbs up.

I reluctantly ordered the chicken flautas and was worried they'd be too greasy and dry like most places in LA serve them. 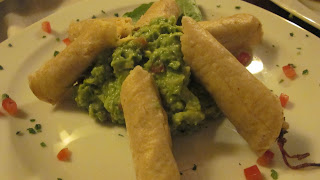 How ethereal were these lightly fried flautas stuffed with miraculously moist chicken meat inside?

Also adding to this place's brownie points was the side of pickled vegetables to accompany our meal. The plate included carrots, cauliflower and zucchini pickled to perfection with just the right amount of bite to them. 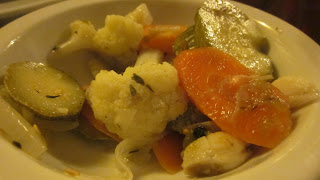 After days of eating nothing but Mexican food, even the biggest Mexican food enthusiast like me gets a bit Mexican food-ed out. So I couldn't help but try some of the more fusion pasta dishes offered.

I tried a spaghetti dish that had chile, cilantro, tomato, onion and topped with some quesillo. Ah! my least favorite cheese. 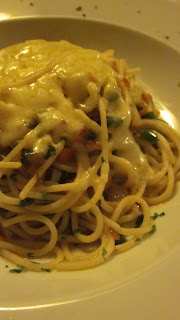 I adroitly set aside the big lump of cheese atop my pasta and enjoyed the pasta underneath. It was fresh and light -- just what I wanted.

The other pasta with squid ink, squid and pine nuts served with fusilli was also very good. I was impressed at the mix of modern and traditional ingredients.

I also tried the soup donaji, which is a Oaxacan delicacy and yes, you guessed it, I wasn't a big fan. It was a shrimp-based broth with dried shrimp and chick peas that was a bit on the fishy side for me. But interesting nonetheless. 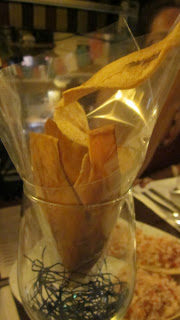 The plantain chips were always a welcome appetizer. The steak I got the second night first came too undercooked and then overcooked, and then they redid it from scratch for me and it was cooked right -- just too much meat for one person to finish, even me.

The side vegetables had too much butter on them and not good quality butter so I couldn't eat them. 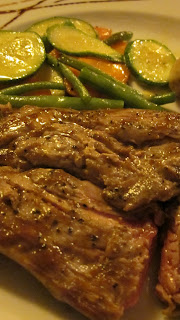 I liked the habanero salsa this place gave us upon request for some hot sauce. That thing is crazy spicy so beware spice fiends.