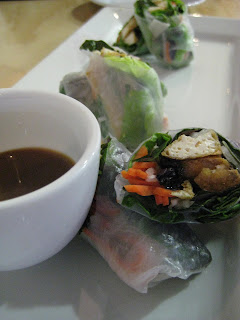 By virtue of knowing some of the people involved in the making of a cute little restaurant called Good Girl Dinette in Highland Park, I walked in as one of the first few customers on opening night Friday. The vibe upon entering was phenomenal -- the decor was airy with exposed brick, fantastic retro chairs (more on those later) and everything about the place said "comfy." Then the air emanated this amazing aroma of curry spices and bread baking, further adding to the wanna-curl-up atmosphere.

For purposes of disclosure, I know the two chefs and some of the people who helped to make this a reality for owner Diep Tran and one of the cooks, Hae Jung Cho. So yes, I want them to succeed. And that's why my review will be honest and coming from a good place. 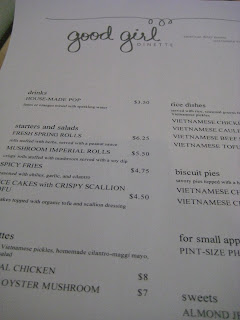 The food was good and innovative but needs slight adjustments here and there. The service was a bit rough but it was opening night so I can understand it will take some time to become a well-oiled machine.

Let me start with the food. I had heard great things from the soft launch a few days earlier and knew what I wanted: the fresh rolls, chicken pho, mushroom sandwich, curry chicken pot pie and maple bread pudding. The fresh rolls were my favorite savory offering. The tofu strips were deep fried and seasoned quite a bit (a bit overseasoned, actually) so it gave a lot more flavor than the standard bland tofu in the fresh rolls you get at other Vietnamese places. The addition of the Vietnamese perilla leaves was a great touch. I'm a huge fan of the perilla leaf in Korean cooking, and this version really enhanced the flavors of the other fresh ingredients such as mint, lettuce and pickled carrots and radishes. 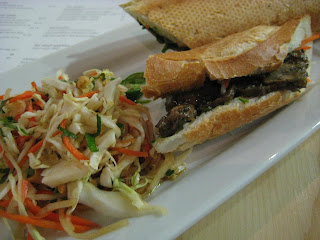 The only thing that I would tweak is the tofu's seasoning so it's not overpowering the entire roll. Next we got what the menu said was Roasted Oyster Mushroom Sandwich but was actually a button mushroom sandwich. I'm usually not into button mushrooms because they don't impart as much flavor as the wonderful shitake or oyster mushrooms. Still, once a bahn mi lover, always a bahn mi lover, so I relished the crispy and fresh baguette, filled with mushrooms, cilantro and the works. The mushrooms could have been less salty. And I missed the jalapeno slices found in most bahn mi sandwiches. The sandwich came with a slaw with some soy-ginger-type dressing that was good but the slaw was a bit wilted. 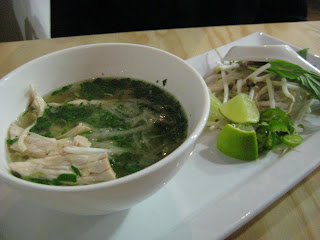 Next came the pint-size chicken pho. I'm sorry to say that the broth was weak. Then again, maybe that's what people like in a chicken pho. I personally would not order a chicken pho if there were a beef pho on the menu (there wasn't). So there's my red-meat-loving bias. The broth was like pho light. It was definitely serviceable but not fantastic.

The curry chicken pot pie was the most anticipated of all dishes. The sheer idea of it had my mouth watering from the moment I heard the buzz from the insiders. 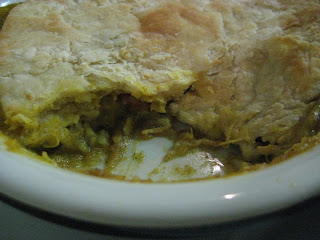 Besides, the enticing aroma of the curry combined with the baking smells in the room had raised expectations even more. I had heard the crust was an issue that needed to be improved on and I have to say I agree. This dish has so much promise its very survival and rise to stardom depends on it. As usual, I couldn't hold my tongue to the wait staff who asked if I liked it and had to tell her that the crust needs to be softer and flakier, like puff pastry. What's inside: upon digging into the crust, the piping hot curry popped up so invitingly and I was momentarily distracted by its uncanny resemblance to Japanese-style curry. 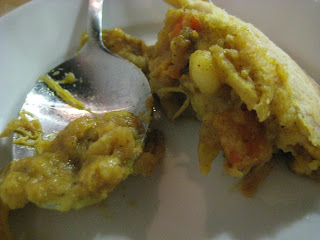 Then I tasted it and found it was indeed different from Japanese-style curry but had too much salt in it. And because the crust was too hard, one couldn't eat the curry with the crust to balance the saltiness. So what did I do? Stuck the curry into the tiny end of the baguette sandwich, of course. It was pretty darn good, if I may say so myself. I actually suggested they add a chicken curry sandwich and one of the cooks seemed intrigued by the idea, so if it's ever offered, you read it here first!

I love this concept but it needs less seasoning for it to really work. 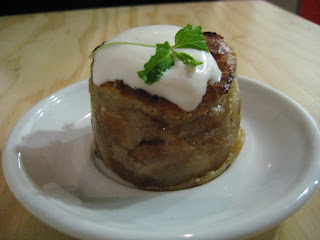 On to dessert, where my research found maple bread pudding to be a clear winner. And it was. It was soft, warm, not overly sweet, with some creme fraiche on top. At the risk of sounding like a snobby hater, if they could, both of us who ate it thought it may taste even better with the addition of somethin' somethin', like apple slices, raisins, hazelnuts, caramel or chocolate sauce or some kind of hazelnut ice cream or gelato. I know. Get over yourself. You're not at The Bazaar.

Bottom line is I would definitely return and hope that Tran and Cho heed to the calls to make what is already good even better.

Tran has a blog about the making of the restaurant, which got coverage in the major papers as well as KCRW's Good Food. She got a call one day from a friend who spotted the perfect chairs in a San Francisco thrift shop. Without seeing them, Tran asked the friend to go for it. I had some serious chair envy when I saw them. Go Good Girl Dinette!

I want to go to this place when I visit in June...but will we have time?

really? it's not THAT great. there are def better vietnamese places we could go to...