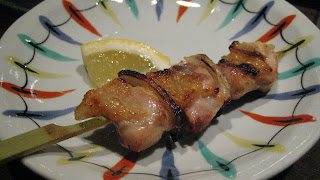 I'd been searching LA for good Shabu Shabu for some time so I was stoked to discover Shinsengumi Yakitori Shabu Shabu in Monterey Park a few months ago. Kagaya in Little Tokyo is beyond my budget although I will try it one day. Shabu Shabu seems like it would be easy to get right but I found that it isn't at all. Like I wrote in my Shabu sen posting, it has to be the right combination of good quality meat that's sliced razor-thin, the dipping sauces -- nutty sesame and tangy ponzu, your personal pot of furiously boiling water and good sides to blanch like nappa cabbage, vermicelli, shitake mushrooms, carrots, tofu, green onions and some other greens. 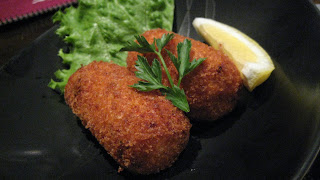 This Shinsengumi location (I'm a huge fan of its ramen joints as well as other chanko nabe and original yakitori in Gardena) is a bit of a drive but it's worth it for its very good grilled dishes and Shabu Shabu. The yakitori menu is pretty extensive and I am particular to the crab croquettes and various skewers we had. The croquettes were piping hot and creamy with slivers of crab on the inside and crunchy on the outside. Not as perfect as Bazaar's croquetas, but good nevertheless. 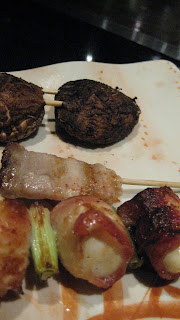 We got chicken, pork and bacon-wrapped quail egg on a stick and they were all excellent. The waitress recommended the "chicken hip," claiming it was the most tender part of the chicken. "It's today's special," she said. Sure, why not? I'm all for tender. And boy, tender it was. It was also juicy with some crunch on the outside -- very good. The pork belly was fine. The bacon-wrapped quail egg? It had bacon in it. Need I say more? It tasted like breakfast on-the-go. My fellow eaters commented it would taste good with beer. Indeed, I should let you know about its happy hour specials 6-8pm on weekdays and 11:30am -6pm on weekends. Its draft beers go for a mere $1 a pop for a glass and something obscene like $5 for a pitcher. It's a pretty good deal, except it doesn't come with a happy hour menu. All the food is still regular price -- not that they're exorbitantly priced. The shitake mushroom yakitori was a bit on the dry side so I would not order that again. And of course, all this tastes better when washed down with some sake. I learned once that really good sake should be drunk cold rather than heated, but sometimes I just want a nice warm glass of sake. 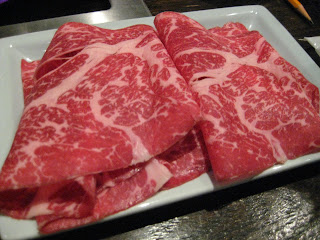 After the yakitori, we were ready for the real deal, the reason we drove out to San Gabriel Valley in the first place. It offers different kinds of Shabu Shabu and we got the cheapest kind called Washu beef for $22 a pop. We only got like 4-6 large slices. I have to say I was a teeny bit disappointed by the quality of the meat. Not sure if the economy has affected them so much that the owner is skimping but the meat simply didn't taste as clean and good as the first time I had it a few months ago. The meat was also not sliced as thinly so it didn't cook as quickly as it should. The sauces, however, were intact and so were the sides (although those are just served raw and we're supposed to cook them so no cooking involved). Sigh of relief. One interesting thing it offers is spicy broth from which to blanch your meat instead of the regular broth. I don't recommend it. I detected some fermented soy bean paste and red pepper paste (tasted an awful lot like a mix of duenjang and kochujang) in the spicy broth. A bit distracting for me. 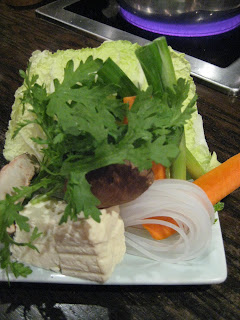 Before I go into some of the criticism (mostly about service), I should say that I really like the Shinsengumi franchise. I think more people should know about it and go eat at its various locations. The guy owns 12 locations including a soondubu place in Tokyo (he's a fan of Korean food as he is of food from Kyushu). He runs a tight ship where there is a strict hierarchy of servers and cooks depending on the mastery of grilling and service, etc. This is how he maintains quality control of the food. That is why I was disappointed at the shoddy service we encountered at this latest visit. It's not a huge deal because I value food more than anything else and service was friendly, just not very efficient and spot-on. Got the order wrong and didn't bring us things like water or tea when we asked for it.

One thing I appreciated is that in line with the times, it offers a lunch special (I think it still does) that's the biggest steal in town -- $5.99 or something for Shabu Shabu! Of course, I took advantage of it once but it isn't easy because of distance. Also, on the 29th of each month that it declares the Day of Meat, it offers 1/2 off Shabu Shabu at $5.88.

It's a good place to hang out with friends and have a drink with some good bar food. And you can have the sukiyaki or other brothy stuff should your heart desire them. Parking is a breeze. Dessert isn't its strong suit. There will be a lot of yelling by wait staff but they're just trying to make you feel welcome, complete with a ceremonial "kanpai" number.

yum - yakitori. my favorite. maybe next time you can join me in tokyo and we can do a izakaya trawl...

anything where there's good food, i'm there!