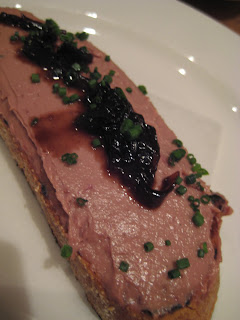 Back to LA eats. If you read this blog regularly, you probably know by now that I'm adamantly anti-hype. But being a pork lover, I couldn't resist trying Animal, a tiny neighborhood joint a stone's throw away from the venerable Canter's but serving pork every way imaginable. The two chefs were apparently on the Food Network -- which I hardly watch anymore (Talk about losing touch with your viewers. Am I the only foodie who feels like the Food Network has it ALL wrong?) -- as the Two Dudes or some such purportedly catchy moniker.


I loved almost everything I had with my dinner companion. The chicken liver spread on toast (right) topped with a sweet onion compote was creamy and delicious. And I don't even love chicken liver. 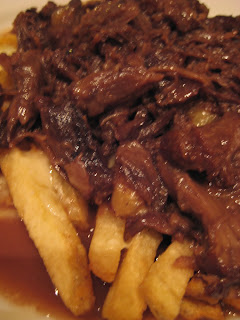 But the biggest surprises of the evening were the entrees: 1) The chefs' intepretation of poutine, which, by the way, is Canada's greatest contribution to mankind; 2) the deep fried quail topped over grits and seared pancetta; and drum roll please...3) THE PORK RIBS!!

Let's start with the modified poutine. Poutine is basically a platter of French fries splashed with some beef gravy and sprinkled with fresh cheese curds. I may have to disclose that I've never actually had the real deal. But with pulled oxtail gravy and cheddar on top, it was the ultimate thing one would crave right around 2am after a very late night drinking, dancing or singing... Brilliant. 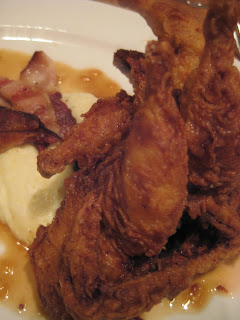 The deep fried quail was perfectly crunchy on the outside and delectably juicy on the inside. I'm sure the fact that it's a smaller bird than chicken prevents it from drying out. It doesn't hurt that it came with slabs of seared pancetta and some creamy, grainy grits. I could have gobbled that quail in one sitting, but wanted to save myself for the pork ribs and boy was that a wise decision! The meat didn't have any gamey flavor so I could tell it was fresh. Lovely.

The mother of all entrees, however, was the grand finale. When the sprawling row of pork ribs with a dark glistening balsamic vinegar glaze landed imposingly on our table, I wondered if it would be as good as some of the barbecue I've had in Atlanta or Texas. The ribs were the best homage to the pork they seem to hold is such high esteem -- and with good reason. 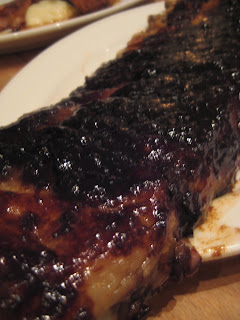 The flesh was so soft and the seasoning and glaze were not overpowering the meat. It gave the meat a sweet and slightly tangy note but not overly so. This is another dish I could have easily torn apart in one sitting but you gotta leave some for later. The meat wasn't as tender when I reheated it, of course, but it was still delicious.

The succotash-type side it came with was a good counterbalance to the heavy meat (as good as it was). It was a light mix of green beans, zucchini and corn.

I would definitely return to Animal. The menu changes daily and I'd like to try the pork belly with kimchi dish because I'm curious how their take on this Korean favorite is. I'm also interested in the grilled squid dish we actually went to sample but wasn't served the day we went.

Email ThisBlogThis!Share to TwitterShare to FacebookShare to Pinterest
Labels: Animal