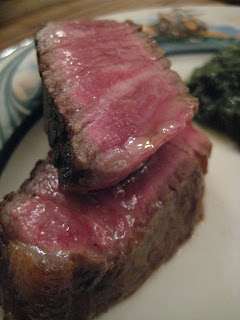 I've never had so many meals in a day and consumed so much meat within such a short period of time as I have during a recent New York City trip. Back-to-back steakhouses, paella at midnight and pizza at 2 a.m., although not all in one day.

I mostly ventured to new places this time around, except for my all-time favorite pastrami joint that's filled with equal numbers of tourists and locals during its bustling lunch hour, Katz's Delicatessen. But more about that later.

First I want to come out and say that the best meal I had -- and I qualify -- during this trip was the perfectly cooked, bloody pieces of sirloin and filet mignon with the delightfully charred edges at Peter Luger Steakhouse in Brooklyn. 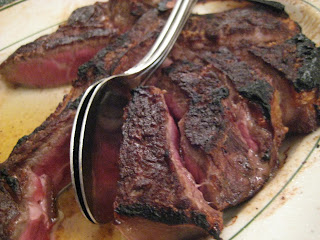 It wasn't Momofuku's pork butt extravaganza braised for 10 hours-plus, or the piping bowl of ramen at Ippudo that everyone raved about. This signature bone-in porterhouse (for two supposedly but really for four) came sizzling on a plate that was so hot our server said we could cook the meat some more on the side of the plate if it was too rare for us. It wasn't. I'm not even a huge fan of steakhouses in general, always saying grumpily that a steak is a steak and I could cook steak on a home grill with better results. Have I been proven wrong. This meat was ridiculously tender, juicy -- yes, all the cliches stuck. The sirloin had a bit more fat so tasted a bit juicier than the leaner filet mignon. But the difference was very subtle and didn't deter from the sublime experience. 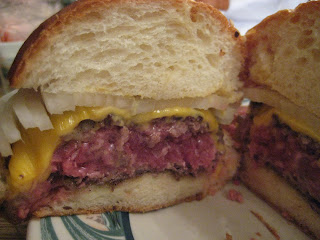 I could actually taste the meat -- and couldn't stop despite the fact that it was lunch time and we also ordered a burger to share, as if we didn't already have enough meat.

You know I'm a burger snob. I have very high standards for my burger and at every bite, I deconstruct and analyze before devouring a good one or dismissing a mediocre one. This burger was on the rare side, rather than medium rare, but was definitely above average. Still, the bun was on the dense and dry side for me and the patty was not as juicy as it could have been. 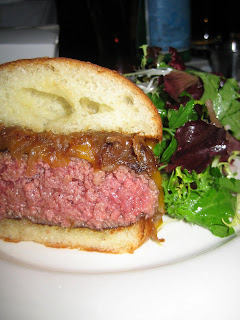 Speaking of burgers, I had three different burgers during this trip. All hyped and all good. I'll get into my favorite burger on this NY trip in a bit, but this one wasn't it. It was a decent burger but it wasn't as good as Houston's in LA (I know. Broken record). The best burger I had was from Minetta Tavern. By some tight scheduling that was at times hard to stomach, we landed a table at this hot spot that is a recently converted old-school steakhouse nearly as old as Peter Luger. I had to try restaurateur Keith McNally's latest project since I love his other joints like Balthazar, Pastis and Dr. Schiller's Liquor Bar so much. This burger wasn't the infamous $26 Black Label burger that has prime dry-aged beef but the relatively quotidian Minetta burger (still not chump change at $16) was good enough. I read that a superstar butcher supplies a patty that has a custom-mix of different beef parts, which was apparent in its great texture and flavor. I didn't love the brioche bun as much -- could have been less dense. The caramelized onions were on the sweet side for me but I liked the melted cheddar cheese topping. 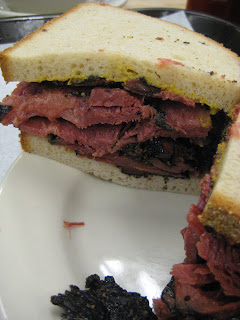 Service, however, left a LOT to be desired at Minetta. Granted it was crowded with a huge line of people waiting, but that's no excuse for curt service. Our female server barely cracked a smile and wasn't helpful or attentive. I lost some respect for McNally, whose other restaurants always had impeccable service (but not as good as The Bazaar -- yes, I couldn't omit mentioning it -- or even Osteria Mozza).

While we're on the subject of sandwiches, can't neglect to mention the always reliably fantastic pastrami on rye at Katz's Delicatessen. I dream about this regularly. Needless to say, it was my first stop. This time around, though, I discovered another thing it does very well. Matzo ball soup! Ok, I don't even like this modified chicken broth with a huge ball of dough floating on it. But wow. 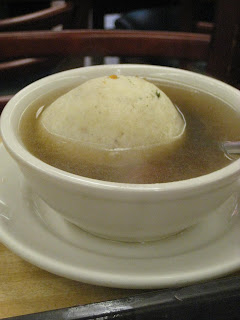 This soup really blew me away. The broth was light, tasted like chicken but not overpowered by it and the dough was not too dense or "doughy" and complemented the delicious broth so perfectly I couldn't help but be a little verklemp.

I'm a new fan of this soup that never sounded appetizing to me. Turns out I just hadn't had good matzo ball soup.

It's also the best way to warm up in cold weather. I heart NY.