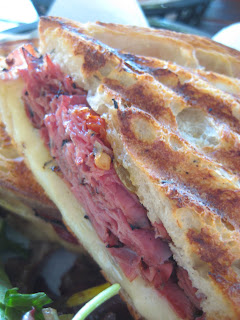 After hearing raves about the kobe burger at Cafe Surfas, I had to try it, although not without skepticism. The verdict: completely overrated. Not only was the burger overcooked when it should have been medium rare, but the patty didn't taste fresh (nor did it have a reddish hue that fresh meat patties have when cooked medium rare right). The bun was too dense and the works, including arugula, red onions, tomatoes, cilantro avocado spread, smoked paprika mayo and aged white cheddar cheese, didn't mesh very well together. I think the quality of the meat just killed it.


We're glad that they made the burger again after we sent back the overcooked one, although it came with less than forthcoming service (actually, the service was pretty darn bad throughout except they did try to do some damage control after the fact and comped our desserts). 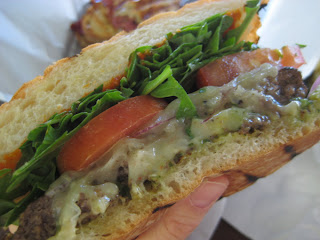 There was something odd in the air among workers there -- like they were all miserable and therefore weren't going to bother with dealing with customers. When we asked for condiments, one had the audacity to tell us to go buy it inside the store. What?!

The pastrami panini that was like a melt was nothing remarkable. All sandwiches came with a salad that seemed too heavily dressed.

As for the mac-n-cheese, oh my, the pasta was overcooked and it basically tasted like plane food. It was painfully obvious that it had been made hours ahead of time and had been sitting there for a long while. 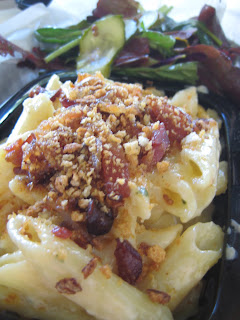 This cafe has so much potential but I felt like its management must have slipped because the items were interesting but just not well-executed at all.

The biscuit with "homemade raspberry butter" was underwhelming, not least because the butter was neither melted enough to spread it nor flavorful in the least. A minor point: the top of the biscuit had a sheen like a croissant, when in fact the authentic Southern biscuits I'm used to seeing usually do not have a sheen (probably glazed with egg yolk in the baking process).

I will be returning but not for the food. Surfas is like a candy store for me, after all -- I could spend hours browsing the isles of their gourmet foods and restaurant equipment. A major complaint about their food section: can you believe that they carry one single brand of radish kimchi and that the company is based out of none other than New York City? And we're in LA, capital of the best Korean food outside of Korea, no less. Outrageous. Surfas' management will be hearing from me for sure.
Posted by ironchef442 at 1:42 AM