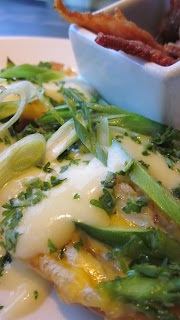 I always drove by the Fat Dog on Fairfax but apparently never noticed it. The verdict is it's overpriced but has decent food and I'll be returning. Oh, and its burger, while a tad overpriced, is good.

What I liked about this place is that it offers a different take on classics like potato skins by adding asparagus and hollandaise sauce. It also claimed to have crab in it but I could barely taste it. The chunky bacon bits added crunch. True, the portions were small as were the potatoes themselves but they were a nice reprieve from the usual blobs of cheddar cheese swimming in a massive potato skin. 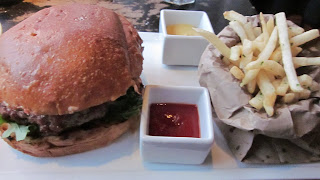 Let's talk burger. I ordered the grass-fed version from Lindy & Grundy next door that was $17 -- medium rare. The first one that came out was overcooked on a dry, day-old bun. Of course, I sent it back. The second one was better. The bun was warm and soft. The patty a bit on the fatty side (not in a good, marbling way but in a bad, chewing into a fatty knot kind of way) and too coarsely ground for my taste. The flavor of the patty was good enough, though. Not as good as the Lazy Ox burger but better than many I've had recently. 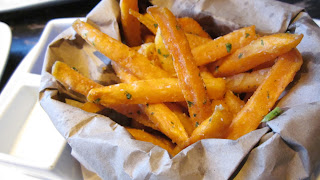 The redeeming factor about the overpriced burger was that it came with fries, which were just above average. They were hot when they arrived and nested in the cutest little brown paper bag. The sweet potato fries we got as part of the happy hour menu (which isn't all that much cheaper, actually) were solid, if not a bit fried too many times over and on the salty side. 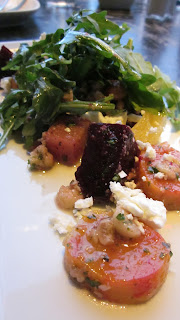 The beet salad was tiny and a bit overdressed but had three different kinds of beets, chevre and a hazelnut dressing that went well together. What's up with the minuscule portions?

The desserts looked more promising than they actually tasted. We got the bourbon bread pudding with chocolate topped with vanilla ice cream and some ginger donuts.

The bread pudding was pretty good but didn't blow me away.

The donuts, on the other hand, weren't edible. They were dry and terrible. Good thing they didn't charge us for them. 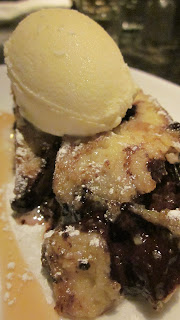 The place has a great beer and wine selection. Parking in the lot is free. The crowd is a bit young (or maybe I'm old) -- twentysomething hipsters -- but I won't hold it against Fat Dog.

Service by our table server was great. However, one HUGE pet peeve was that every other person working there was overly zealous to clear the table, even if we clearly hadn't finished the plate. Hey, we're still working on those two shriveled sticks of French Fries, ok?

Will return since it's in the 'hood, serves decent food and not too crowded.
Posted by ironchef442 at 6:00 PM