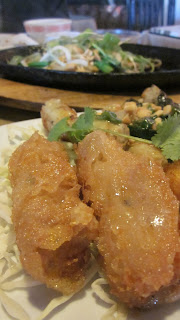 Similar to the beef version, the eight courses include fresh rolls with fish instead of pork and shrimp, fish salad, fried rolls with fish that you can wrap in a panoply of greens like lettuce, basil and mint as well as pan fried fish and fish porridge. 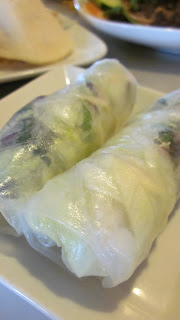 The least of all evils were the fried rolls that we could wrap in rice paper we soak in hot water, add a bunch of herbs, roll up and dip in a fish sauce. Tasting fish instead of pork as a filling was unusual in a good way. Otherwise, the course meal was truly unremarkable.

The pan fried fish that came on a hot place was sizzling but overcooked and stuck to the hot plate so we virtually had to yank the meat off of it. 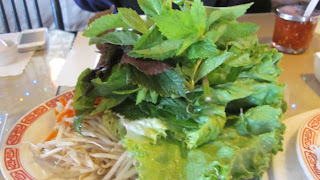 The porridge didn't have any fish in it that we could see or taste like it, for that matter. I know porridge is by definition bland, but this was ridiculous. 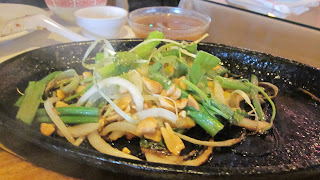 We got some meat dishes like bo luc lac with garlic noodles and the bun with charbroiled pork and fried rolls.

The bo luc lac was average at best. The quality of the filet mignon wasn't great. The meat should have been incredibly tender. The noodles were a disaster. Overcooked and underseasoned. What were they thinking? 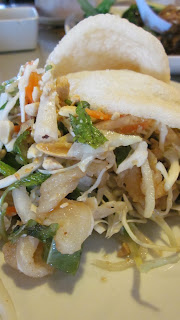 The fish salad isn't even worth mentioning.

The bun -- noodle salad with thin slices of charbroiled pork and chopped fried imperial rolls with raw carrots, bean sprouts, cucumber and lettuce all mixed with a fish sauce based dressing that I like to spike up with the chunky red hot chili sauce -- was ok but the noodles were overcooked and the rolls gave off a strong porky smell, which could only mean they used poor quality pork or worse, old pork. 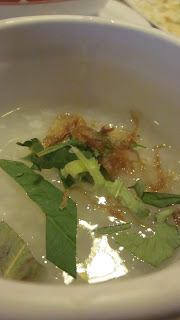 The only redeeming factor about this place was the half-way decent dessert. We got the halo halo, which came with taro ice cream and three kinds of beans topped with chopped peanuts.

The beans weren't too sweet (a lot less sweeter than the Korean or Tawainese shaved ice versions) and the taro ice cream was ok.

Still, that isn't enough to make me want to return.

It makes me sad because I feel it has so much promise but I didn't get a sense that the owners cared about serving quality food. 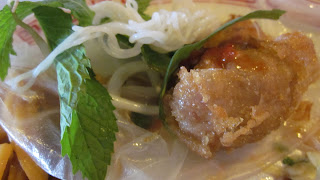 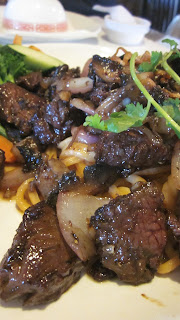 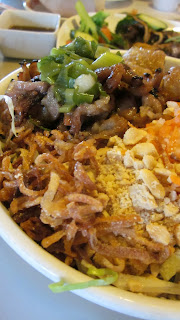 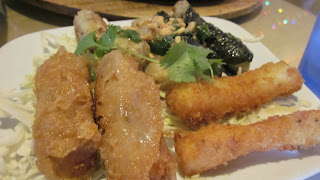 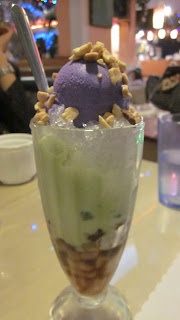 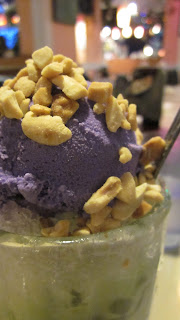