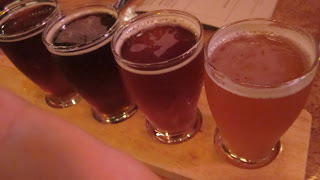 I loved that Mohawk Bend gastropub is a converted theater. Even the sign outside was left as a marquee. The decor inside was great too. Great selection of microbrews. The problem? The food. 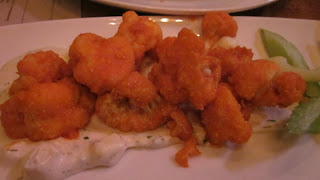 I didn't like the Buffalo style cauliflower but that may be because I don't love buffalo wings. Not my favorite. We also had the chop salad that included corn, broccoli, avocado, romaine, red bell pepper, potato and tomatoes drizzled with roasted red pepper dressing. The vegetables were cooked crisp and the salad was good but it wasn't anything special. 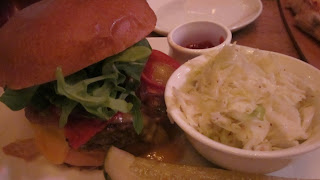 Then we had the namesake burger that came with arugula, pancetta, grated Parmesan cheese, red onion, pickled chili, roasted red pepper and spread on the bun was some rosemary-garlic aioli. I added cheese at extra cost, which is outrageous. And fries were extra too. Inconceivable. We had asked for medium rare and it was a bit overcooked but I didn't want to send it back because I was hungry. 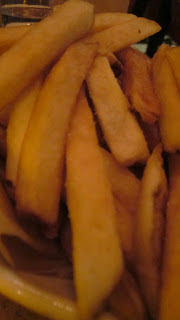 Let's dissect this burger. The bun was fine -- not too dense and soft and fresh enough. The patty was on thin side for a $14 burger. The quality of the meat wasn't stellar. Definitely above average but trailing that of Houston's (of course), Rustic Canyon, Lazy Ox Canteen and Bowery. The patty also wasn't ground evenly so some of the chunks were chewy, which on a positive note could give a sense of it being ground on-site and not at some huge factory that churns out its patties from a metal dispenser machine. But it wasn't a good feeling chewing a bit piece of fatty piece that hadn't been ground properly. The works were fine but as a purist, I contend that there was too much going on. Too many flavors and textures can work against itself. The accompanying cole slaw was bland. Pickle was inedible. 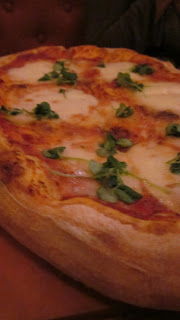 The fries were just fries you'd expect at some dive bar, not a foodie gastropub that takes its food seriously. Disappointed again. I liked that they were piping hot when they arrived and weren't over salted though. Brownie points for that.

Don't get me started on the Margherita pizza. The dough was worse than Domino's (although it's been a while since I've had that) -- thick, overly doughy and tough. Nothing like the airy, fluffy and light pizza crust it should be. The beauty of the true Neapolitan pizza or any pizza I've had in Italy, for that matter, is that they're light, super thin and very easy on the cheese and sauce. Execution on this one was bad. 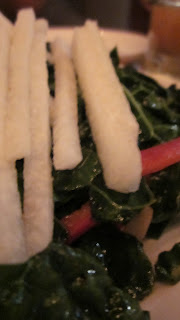 The garlicky kale salad that came chili and jicama strips was refreshing but as they say, it is hard to mess up a kale salad. Man, that sounded mean. I don't have any hard feelings for this place, by the way. I was just disappointed because I had high hopes and I was so taken by the decor upon entering.

Service was great though and very attentive.

We had the beer flight and those are always a treat. I had one that tasted very unusual -- like maple syrup but more savory -- but of course I forgot the name. 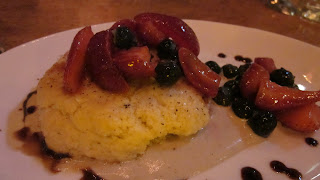 Unfortunately, the finale was disappointing too. The berry shortcake was nothing like I imagined. I wanted a berry shortcake a la Sweet Lady Jane, fresh berries sandwiched between super moist cake and the fluffiest cream. I think I need a refresher at SLJ soon to detox from this dry and overly sweet version.

I'll likely return for the beer selection and stick to minimally prepared foods. Still, thanks EW for introducing me to this neighborhood joint!
Posted by ironchef442 at 6:00 PM