Best of 2011: Burgers, Marinated Raw Crab and Everything In Between 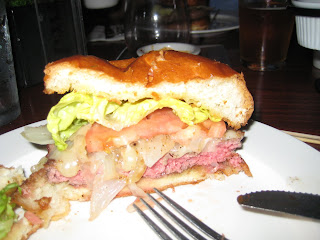 It's that time of the year again, the roundups, the best of's. Ok, it's a day late, but let's kick off the new year with a summary of highlights from 2010.

Yes, it was a great burger that cost me an arm and a leg -- that $26 Black Label burger from famed butchers La Frieda in New York. But no, it didn't replace Houston's California burger as my favorite burger just yet. While the patty was fantastic, there's something about the combination of the patty with the avocado, arugula and red onions that this Burger Kitchen didn't have. Wouldn't hurt to up the ante on the works on the burger. I also love the trend of new serious burger joints popping up. Other honorable mentions include Rustic Canyon, Village Idiot and Bowery. 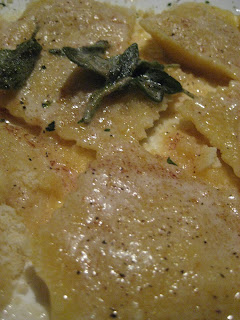 I was elated to discover this hidden gem smack in the middle of one of my least favorite areas, Larchmont. After I returned from a trip to Italy this summer, I was searching for a place serving food that reminded of my amazing eats there. Well, this joint came close. The pumpkin sage ravioli was to die for, as was the mushroom ravioli -- which gave off this wonderful mushroom aromas and flavor where I could really taste the earthiness of the mushrooms in a creamy sauce that wasn't too heavy. It also serves addictive carbonara, which isn't on the menu but they will make it for you upon request. I felt the non-pasta entrees weren't as excellent but still pretty up there. The BYOB option is an unbeatable deal. A great value alternative to places like Osteria Mozza, which I also love but is more of a special occasion place than this. Granted, this is no everyday joint either, but I mean relatively speaking. A must try for Italian food-lovers. 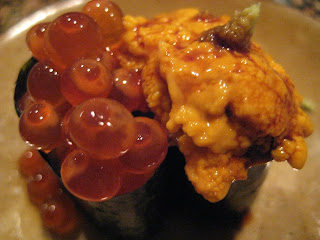 It doesn't get any more food porn than this number to the left. The sushi was fantastic. I was most blown away by a squid sashimi the chef made where he cut the squid into thin strips like noodles and smothered them with uni, or sea urchin. Wow. The shrimp sushi was also excellent, although I don't usually go for shellfish. In short, a true gem but only thing was I was turned off by the rude chef, which seems to be a mandatory trait for some sushi chefs to be taken seriously. Shame. A close second and a neighborhood joint is Jinpachi, which also had first-rate quality fish. Warning: neither of these is particularly cheap, so save them for a special occasion and make sure you do omakase, or chef's choice, if you go since they know best what's fresh. 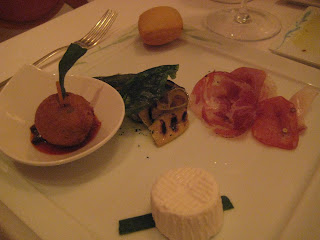 This was by far the most elaborate and luxurious meal I've had this year (thanks "mj"!). It was while traveling in the southern part of Italy, near the coastal city of Sorrento, known for its delicious lemon liqueur lemoncello. This meal had like gazillion courses, each with a description spanning like five lines of adjectives and such -- and all fantastically delicious. The wines that were all local wines were also fantastic, as was the impeccable service. The cold cuts, cheeses, meats and fish were all amazing, as were the combination of the dishes, which were innovative and traditional the same time. A great place for a special occasion trip and meal! 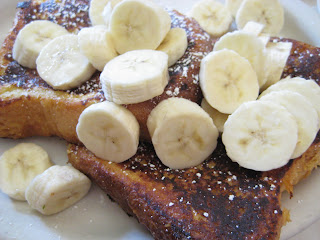 I'm biased about best brunch places because I love French Toast more than I do pancakes or omelets. But Amandine Cafe serves up some mean French Toast, with tons of fresh fruit on top. Gotta love that. Plus, the coffee (cappuccino in my case) was pretty good. The only downside is that it's cramped. But go early and you can avoid the crowds. At least there's no line waiting outside like the ones I see in overrated joints across LA. 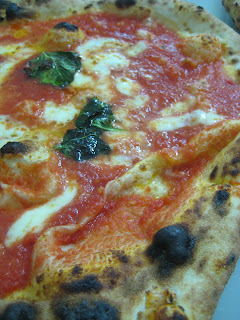 6) Best Italian Meal in Italy: Tie between Da Michele in Naples and my friend's home-made dinner in Bologna

You can't beat the value and sheer simplicity of a beautiful pizza Margherita at the humble Da Michele, located a 10-minute walk from the train station in Naples. It's tomato-y and cheesy without being too heavy. The fresh basil is perfect and the crust, oh the crust -- Crispy but chewy and thin as ice.

Then the home-made dinner my friend EB made me in Bologna was also priceless. She made us spaghetti a la carbonara and served us an assortment of cheeses and cold cuts that were out of this world that gave me a newfound appreciation for real ricotta cheese that I had never had and I also developed a grumpiness about the US not importing enough goodies from that side of the world. I want good, smoked provolone, darn it! 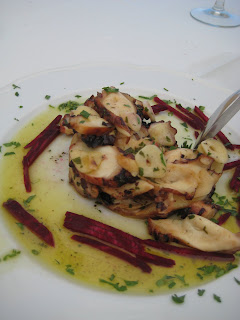 7) Best New Cuisine Discovery: Greek, from Meal with a View in Santorini, Greece

It's not that I've never had Greek before. It turns out I'd never had real Greek before. What a revelation. I was never big on the go-to items for Greek cuisine, like gyro or feta cheese and flavor-less black olives.

But this place, which had an amazing view to boot, Archipelago, served up some amazingly fresh and flavorful dishes that blew out of the water (pun intended) any misperceptions I had about Greek food. I could taste the great quality olive oil in this grilled octopus dish and the lamb wrapped in grape leaves came stuffed with other goodies that made me want to wish there were some good Greek eateries right here in Los Angeles. Oh why oh why can't we find such good Greek here? Oh, and the cheeses were entirely different. They weren't as one-dimensionally salty as the feta found here. It actually had layers of flavor and different textures. I'd definitely like to return to Greece to experience the real deal again. 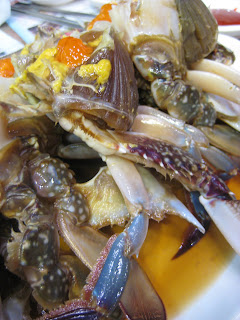 This was a tough one. I picked this kyejang place because marinated raw crab isn't something that's easy to get here -- at least not first-rate crab. This crab was meaty, wonderfully garlicky and just salty enough.

I just don't know what people are smoking when they say that LA's Koreatown has better Korean food than in Korea. Something about better quality meat? Seriously, as much as I love Ktown, it has nothing on the OG back in the homeland. I had some incredible Kwangyang bulgoki, sweet potatoes in the eastern coastal region, amazingly fresh fish by the sea and so much more. Ah, time to go back. 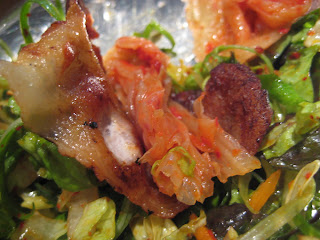 This outpost of a Korean chain, Park Dae Gam (aka Park's BBQ), that specializes in pork (case in point of my previous entry about Korean food in Korea) serves up fresh pork every way. It's cooked table-side and comes in different cuts. There's the rice fried on the grill at the end and the delicious spicy green onion salad that you can add to your meat wrapped goodness. It's much like Honey Pig but I thought the quality was a tad better. They're almost comparable, I'd say.

Last but not least, I found it amusing to have an unexpected and extremely lengthy exchange with the owner of Starry Kitchen, which started when I reported extremely rude and inappropriate service from the owner on my second visit after I wrote a negative review. He responded by saying he doesn't know what I look like, and it wasn't rudeness. It was his sense of humor, he insisted. All I have to say is, I'm not the only person who's experienced odd behavior by the owner. But that's ok. I didn't like the food but it seems to be doing well with good reviews so more power to them.

Coincidentally, I got a strange offer from the alleged owner of a gourmet sandwich shop chain that will remain unnamed to serve as his "advisor" and give an honest opinion on his restaurant empire. Laughable, truly. I thought it was weird that he insisted on "having lunch" and showering me with compliments on my reviews. Not surprisingly, after I asked him for details on this "admittedly unusual" arrangement, I never heard from him again. I should out him, but let this be a warning to other food bloggers who write anonymously. When a restaurant owner suddenly asks you to lunch and offers you a job as an advisor, ask for details. If s/he responds and confirms the arrangements in writing, then maybe will it be truly legit. Thanks mj, for your advice!

Nice try Mr. Sandwich. Oh, and in case you're wondering, I don't think much of his sandwich shop. It's plenty popular in the office areas of downtown, but I always found them far too bland. I've never reviewed the shop but I have reviewed another downtown restaurant he owns, which was awful and I made my opinion known.

Email ThisBlogThis!Share to TwitterShare to FacebookShare to Pinterest
Labels: Best of 2010, Roundups

Have you tried the burgers at Boneyard Bistro in Sherman Oaks? You really must. You have to be on top of the guys and make extra sure they cook it the way you want it, but it IS worth it. For extra, thry'll put foie gras on any burger, but they're amazing without, too. They offer two size selections. Start with the OMG burger and work your way down. Also ask if they ahve a "burger of the moment".

i haven't and thanks for the tip, Diana. glad you're a fervent burger lover like me. will definitely check them out! love that it has sweet potato fries too.