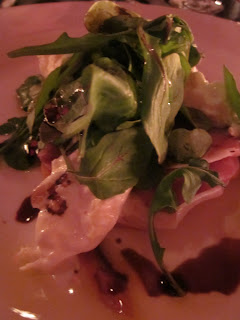 La Boheme's decor was very goth, with exquisitely elaborate chandeliers (which weren't goth but reminded me of the set for a vampire movie) and different kinds of seating available -- everything from a cool booth to a round table or an intimate table on the top floor overlooking the entire dining room.

The food? I wasn't blown away but I did notice the interesting touches here and there of the chef's Japanese American background -- the persimmon salad was excellent. It came with arugula, prosciutto and deliciously creamy burrata. It had everything, salty from the cured ham, slightly sweet and tart from the fruit, creamy from the cheese and of course, the crunchy texture from the greens and fruit that brought it all together. 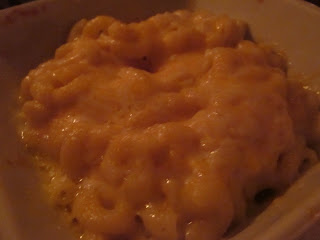 After the first course is when the story starts to go awry. We got the burger and the four-cheese mac-n-cheese. The mac-n-cheese came first. Good Lord. It was a blob of overcooked elbow macaroni mixed in with what looked and tasted like Cheez Whiz, no kidding. I couldn't believe that any self-respecting chef would allow something this atrocious out of the kitchen. Crime #1: pasta should not be overcooked. Crime #2: it had no breadcrumbs. Most importantly, crime #3: it didn't have any flavor whatsoever. I asked the server what the four cheeses were and she could only name three and never told us the fourth -- they were cheddar, mozzarella, parmesan and ? 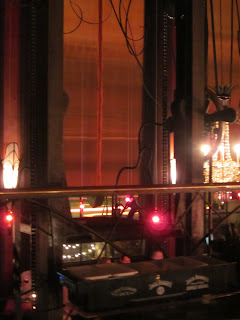 The only reason we decided not to take it back was because we thought we could probably repurpose it at home with some hot sauce or something.

Anyhow, the burger was just an inch above average. The bun bread was so unremarkable -- dense, not sturdy enough and not much flavor. A brioche bun would have been a lot better.

The patty was not bad. The grind was coarse and the flavor of the meat was decent thanks to the slight char on the outside. It was cooked medium rare but because it was on the thinner side so biting into a juicy, bloody patty wasn't to be.

The works didn't work for me. The bacon was too strongly flavored although I must fully disclose that I'm not a bacon in my burger kind of person. The cheddar cheese was fine enough but what's with the lettuce dripping, no drowning in this so-called horseradish mayo that's pretty flavorless and is just soaking my burger? The mayo definitely needs to go. The caramelized onions were ok but I prefer my onions raw (yes, like my fave at Houston's).

On the upside, the fries were pretty good. They were shoe-string fries that came out piping hot and crispy. They had some sort of spicy Cajun-like seasoning on them, which I didn't like much but got over it thanks to the good execution of the fries.

The coolest thing I saw was this device above called a "dumbwaiter," which transported our drinks from the kitchen to our second floor table. We had the old world and new world red wine flights, with everything from a super Tuscan to a Syrah, those two being my favorites in the respective flights. To our surprise, we liked the new world flight better but it's always fun sampling.

Maybe I'll venture out here again for its happy hour, but only because it's close to my 'hood. Keep up the great salads. The mac-n-cheese (and burger, for that matter) department needs a lot of work, for sure. Service was well-intentioned but spotty and a tad frazzled.
Posted by ironchef442 at 10:26 PM