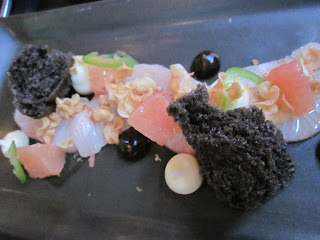 I've always been a huge fan of the Bazaar and considering Michael Voltaggio was partly responsible for that magic, I entered ink with great anticipation.

Thankfully there was no line for walk-ins at 6pm on a Sunday. We sat at the bar and ordered away.

The verdict: loved it! It was almost as good as the Bazaar. As you know, I'm not one for hyperbole and I rarely gush about restaurants unless they truly warrant it. 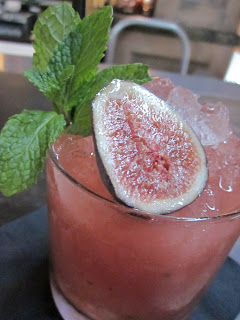 We started off with a refreshing hamachi sashimi plate with grapefruit, slices of jalapeno and a parsnip-sesame cream. The hamachi was excellent -- velvety and super fresh. It also came with these sponge cake-like things that had hints of sesame in them and texture-wise, the plate was garnished with what seemed like parsnip chips. They were crunchy and complemented very well with the buttery hamachi. The jalapenos were tempered so they weren't super spicy and had just the right hint of heat.

Before staring our food adventure, I got a cocktail of brandy, mint, fig and lemon that was mixed by superstar mixologist Devon Espinoza. I just blogged about how much I love figs so this was a no-brainer. It was delicious and the perfect aperitif to the meal I was about to have. 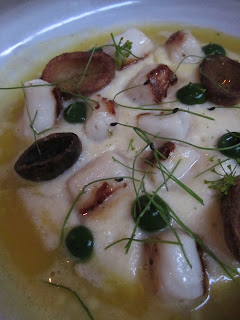 The bay scallops on a bed of cream of dehydrated potato, tiny potato skins and topped with a type of micro-greens was so comforting. The scallops were seared and nicely browned but super soft on the inside. The potato skins were cute as a button, not to mention crispy and all the good things about potato skins (but without the insane glob of cheese and bacon you get at other joints). 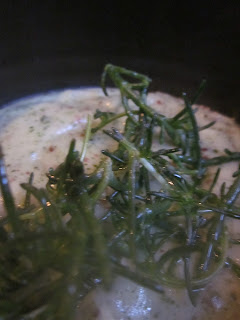 Well, the sea grass flavor gave the super creamy mashed potatoes another dimension of flavor besides a light tint of green. I know I said the scallops were comforting but so were these potatoes. I can't put my finger on it, but there's something about creamy, starchy things that just take you back to that super nostalgic, comfy place. While intoxicated in my state of nostalgic euphoria, I soon found myself scraping the bottom of that dish.

The mashed potatoes were topped with sea beans that didn't have such a distinctive taste but it did give a slight crunch to the decadent potatoes. I wished I were sitting in a booth so I could curl up with a blanket nursing this dish. 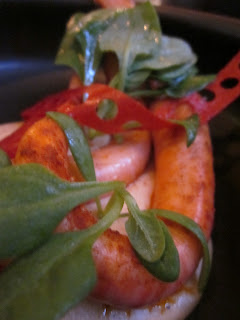 The other dish (actually, I loved all the dishes except for two) to rave about was the octopus that tasted smoked and super soft, with some buttered popcorn mash (yes, he literally took buttered popcorn and blended it), piquillo peppers and humble, fresh spinach to finish it off.

The octopus was thick and amazing. The plate also featured an edible band with holes that had been made from compressed piquillo peppers. The band tasted smoky and delicious, just like the real peppers. 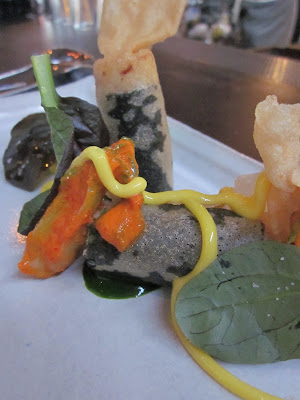 The two dishes that weren't as stellar were the crab and squid. The crab came wrapped in seaweed and then again in a thin spring roll sheet that was deep fried, cut at a bias into half and accompanied by bok choy kimchi and drizzled with smoked mayo. Being a die-hard kimchi fan, I was very skeptical about how it'd taste. I assumed it would be watered down but alas, I was wrong. He didn't compromise on the heat. He ground the spicy paste very finely -- so finely that it almost didn't look like kimchi. The red hue was more of a bright orange so that's where my bias came from. I liked the kimchi but the crab rolls didn't jive as well with the garlicky kick of kimchi and the mayo didn't add too much value either. 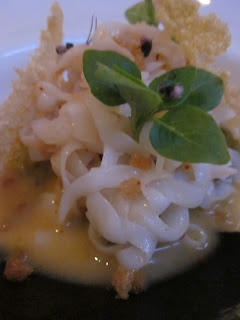 The squid dish was a giant squid cut into strips like pasta ribbons seasoned with piment d'espelette, a mild pepper often used in Basque cuisine. The "pasta" sat on a squash emulsion and a hazelnut-squid ink pesto. It was garnished with Parmesan crisps.

It wasn't bad but not as excellent as the other dishes.

One interesting thing we noticed and that the restaurant is apparently known for are these huge blocks of ice served with the drinks at the bar. It's a large, vertical block of ice the length of a tall glass that looks like a sculpture. Even the way the ice looks inside is like art - just beautiful. It's a patented type of ice and they were cagey about sharing any secrets to how it's done. 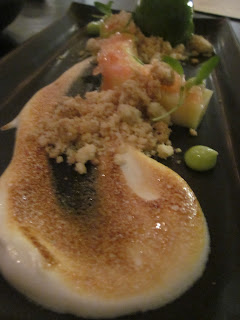 The desserts were good and definitely a treat for their unusual combinations and innovation.

The one I liked better was the grapefruit curd with avocado essence, cilantro sorbet and charred maple-lime. The grapefruit was tart and not too sweet and the avocado added an interesting savory layer to the dessert. My favorite within this dish was the cilantro sorbet. It was a dark green packed with cilantro flavor that cleansed the palate and was a great finish to a meal. I couldn't stop scooping the sorbet. The maple-lime was good but I was happy just with the cilantro sorbet. 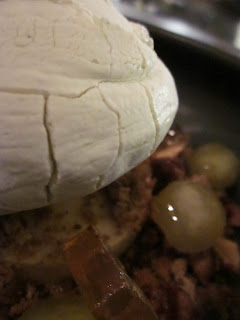 The apple creme caramel came with burnt wood sabayon, and topped with a merengue dome. I didn't care too much for the whole thing but I liked the little apple-flavored "grapes" made from compressed apples with some liquid that makes it look like these beautiful translucent gems.

All in all, ink didn't disappoint with creative but not gimmicky (ok, maybe a little gimmicky) dishes that push the envelope and make for a great food adventure. Unusual combinations and textures are the name of the game here and I can't wait to return to try the meat dishes. My dinner companion and I also thought the prices were reasonable for what we got -- for the most part, art on a plate. 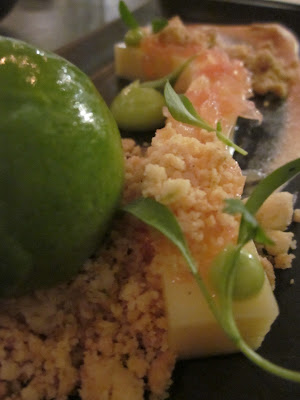