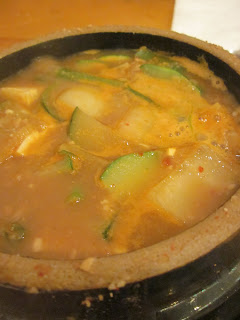 No, it isn't photogenic by any stretch, but solid, perfectly salty and stinky in a good way duenjang jjigae, or fermented soybean paste stew, is the ultimate comfort food for me. But sadly, it isn't easy to come by in LA's Koreatown. And that's why you must venture to Jang-an Duenjang. Jang-an is one of those places where everything is only in Korean, including the mini-mall sign, the sign outside the actual restaurant and the menu. Basically, it hasn't bothered trying to market itself to the non-Korean population because it figured it was self-sustaining within the community. But that would be a huge mistake because it serves a really mean duenjang jjigae that behooves it to be shared. 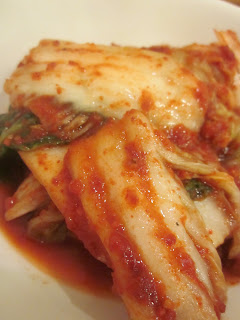 What I also liked about this place was the side dishes like the kimchi, which is made here and was unlike the commercial ones sold in bulk at the markets. I could taste the freshness and it was just the right level of spicy. 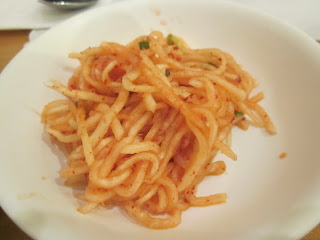 It also had bean sprouts, or kongnamul, that had been blanched and seasoned with some garlic, salt and sesame oil. The other banchan included daikon radish strips pickled with rice vinegar and red pepper flakes with a hint of sweetness added for a refreshing finish. The tofu side dish was a bit hard and tasted like it had been sitting on the counter for a while. Not the freshest tasting. 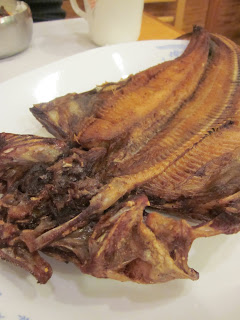 We also got an order of pan-fried flounder-like fish, in Korean it's anmyunsoo, which was not the fleshiest of fish but fresh and delicious.

Again, not photogenic at all (quite scary-looking, actually) but I'm telling you, it's good and worth getting. Grilling or broiling is probably healthier than pan-fried like this (similar to the fried whole fish you get at Thai restaurants) but it's still relatively healthy. It's not often that Korean restaurants serve good seafood. I still haven't found a good fish market in Koreatown, but I'll save that for a rant later.

So if you'd like to try some rustic Korean stew that's got soul and a ton of sodium that will be balanced out by some clean protein in the accompanying fish you'll order, get thee to Jang-an Duenjang, located on the corner of Olympic and Berendo in Koreatown just west of Vermont.