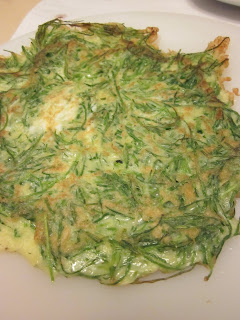 Markets are like candy stores for me so it wasn't a surprise that I spent all of three hours scouring a Korean market that sells everything from produce and cookbooks to slippers and plates.

Anyway, I discovered a new green that looked fascinating called saebal (세발나물), so naturally I bought it.

Thankfully, the packaging suggested I make namul or jeon with it. Namul is an umbrella term that usually refers to a vegetable that's been seasoned either raw or cooked -- in this case, raw. Jeon is a pancake, like the one you see here. I figured I would split the green into both namul and jeon. However, after I pan-fried some saebal jeon in a batter of water, egg, flour and ready-made jeon powder all seasoned with some salt, it tasted so good I didn't need to make namul.

The saebal jeon was easy to eat (I had chopped the greens into one-inch long strands) and very mild and refreshing in flavor. The jeon was delicate in texture because the greens were very thin. The greens went very nicely with the flour-based batter.

They literally sold like hot cakes once they hit the table.

I had them as namul at a restaurant a few days later, seasoned with nothing but a bit of sesame oil, salt and red pepper flakes. Delicious but not as good as the jeon.

I predict this will soon become a rant of the week where I complain about a lack of fresh greens like these in LA. Stay tuned...
Posted by ironchef442 at 12:00 PM

Yummmm...that looks good. I'll have to keep an eye out for some at Market World in Torrance.

hey MA, I'll have to look for it in markets in LA as I've never seen it sold but will keep trying!