Cooking with Jose Andres: Beef Sirloin with a confit of Piquillo Peppers 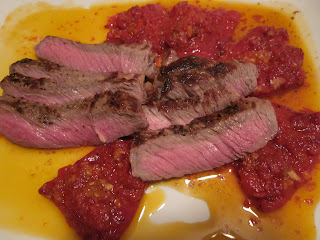 Jose Andres owns one of my favorite restaurants in LA, the Bazaar. But long before he landed here, I'd already been enamored of his DC restaurants, Cafe Atlantico and Zaytinya, with a little less love for Jaleo. I've wanted to try Minibar for some time but it's on my list for a future visit.

The man knows how to cook good, creative and beautiful food. And I confess I've probably watched most if not all of his PBS Made in Spain travel and cooking shows. Astonishing (to quote the man himself)! Heck, I've even downloaded music from the Spanish bands featured on the show! 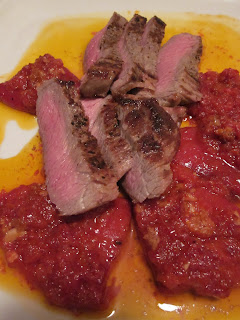 Anyway, I have his tapas cookbook, which I cherish and have used many times to great results. It is, however, a bit weak on the meat side, so I enlisted the help of his online recipes from the show. This beef dish was simple and delicious, particularly the piquillo peppers. I know I say this a lot, but truly, it's hard to go wrong with these babies. Add a bit of garlic and olive oil and you've got a great combination of meat and smoky, garlicky peppers softened by long hours in the oven under low heat. I also used leftover peppers to great effect in my turkey sandwiches to give them a flavor boost.

Flat iron steaks weren't as easy to find as I would have thought so I substituted with skirt steak, which was good but a bit fatty. I used a heavy cast iron grill over the stove that worked very well to grill the meat (fantastic grill marks). I could go on and on about the virtues of this tool, but that's another post. Enjoy.