101 Noodle Express in Alhambra: Noodles, Beef Rolls and Dumplings, What's Not to Like? 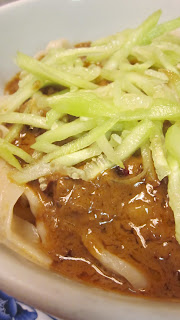 It's always a treat to venture out to San Gabriel Valley to have some seriously good Chinese food. So it was with much anticipation that we nabbed a shared table, dimsum parlor-style, at 101 Noodle Express in Alhambra (it opened a location in Culver City but as this review of Yamadaya shows, it may not be the same as its original location).


We got the dan dan mian, which was very similar to jjanjangmyun, the black bean noodles that is the classic Korean Chinese dish, except its sauce is a lighter brown color rather than jet black. It was topped with cucumber strips, just like the Korean Chinese version. 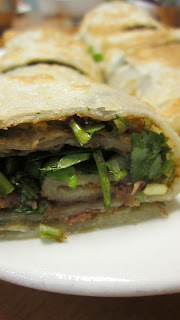 The noodles that are handmade were thick and chewy. But the kicker was the sauce. Yes, it was greasy, as you can see in the picture. But so much flavor. It had ground pork in a sesame-like, nutty flavored sauce that was so comforting. It's probably too greasy to consume by itself. The fresh cucumber slices on top helped to balance out the heaviness from the fat. 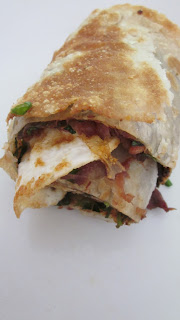 That's the beauty of the menu here -- we also got the famous beef rolls, greens, dumplings and some spicy greens mixed with peanuts, edamame and tofu cubes, but more on that later.

The beef rolls: an amazing array of deli-like beef slices, fresh cilantro smothered with some sweet and salty sauce, all rolled into a thin, flaky scallion pancake-like wrap. It's like nothing I've tasted before -- salty, sweet and crunchy from the cilantro and the warm, toasted skin. 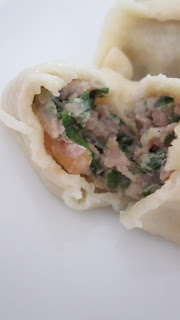 It was very good and interesting but got a bit salty after a few bites. I couldn't wait to pair it with other things in the wrap, like, yes, you guessed it, a fried egg to balance out the saltiness, or some (gasp) shredded cheese mix. The re-purposed roll was a bit better for me as they weren't as salty.

The restaurant specializes in cuisine from the Shandong region. Other things we had included steamed pork and leek dumplings, which were excellent. No weird porky smell or overly doughy skins. 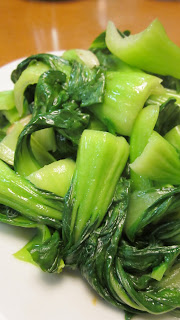 To round off all the meat and fat, we balanced it out with some greens stir-fried with garlic, which were the perfect accompaniment to the greasy fare we had.

The chopped steamed greens with peanuts, tofu cubes and soy beans seasoned with a bit of spice was another healthy side with some kick. I could have that solo for lunch and some brown rice for lunch for a high protein, low-fat alternative.

The green chili sauce that the lady we shared the table with warned me was spicy wasn't too bad. It went well with the beef roll initially but then it got too salty and spicy. 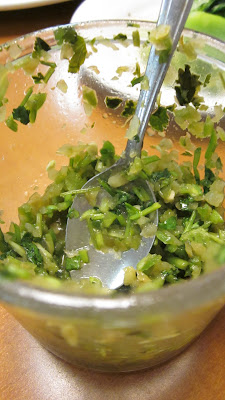 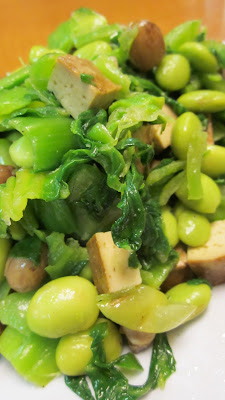 Yum! This was delish!

yes! thanks to the mandarin-speaking friend who took me there and ordered for the table :)