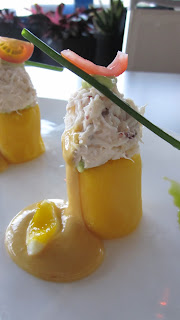 I had heard a lot about Gaston Acurio, Peru's superstaf chef who built a global empire around exquisite Peruvian that goes beyond lomo saltado. Don't get me wrong. I love me a juicy lomo saltado. But my dear friend and superstar chef himself, MO, first introduced me to this guy and his type of cuisine.


Even better, I learned so much about Peruvian cuisine thanks to MO's amazing cooking. Even before I tried Acurio's dishes, my friend's cooking set the bar, very high at that. He made us a fantastic array of causas and cebiches with the most fascinating sauces that tasted great and whose vibrant colors looked even better. 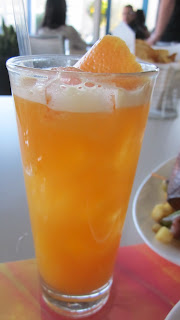 The causa limena looked and tasted great. Imagine a mound of mashed yellow (more yellow than a standard Idaho variety) potatoes, topped with some crab meat, tomato and finished off with some huancaina sauce and a hard boiled quail egg wedge.

It was an awesome combination -- the mild, soft potatoes with wonderful crab meat, which was fresh -- all with a mild kick provided by the sauce that is made from yellow Peruvian pepper and fresh white cheese, among other ingredients. 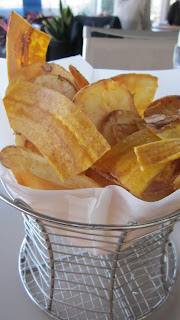 I love pisco sour, so an Andean cocktail was a must to get started. I opted for a passion secreta, which included pisco, passion fruit, lime juice, egg whites and some other things. I'm always lured by the idea of passion fruit because of its name and then am reminded I'm not a big fan of the flavor upon consuming it. Silly, I know. Note to self: Make sure to stick to the classic pisco sour next time or at least avoid passion fruit. I love that it also offers Hitachino White Ale, one of my fave beers, and has a great sake selection, presumably as an accompaniment for the cebiche. 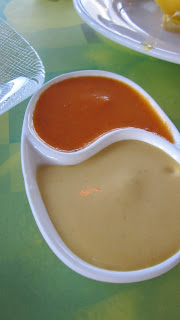 Before I get into the cebiche, let me say the complimentary yucca and plaintain chips that came with two sauces, one spicier than the other but not much different otherwise, were good. Crunchy and not too oily despite being deep fried.

The only complaint was that they were a bit fatty rather than watery (high fat content) and they could have used more kick. Ok, those are two complaints but who said I was easy to please? 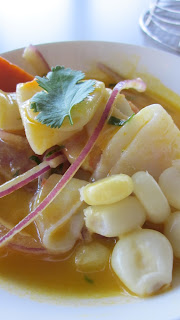 So the cebiche: we got a mixed one that had yellowtail, squid and shrimp with some red onions and corn in a citrus marinade dubbed "leche de tigre," which literally translates to tiger's milk but really refers to the decidedly un-milky marinade that the cebiche quickly "cooks" the raw fish.

The fish and shellfish were both fresh and again, I could have used more kick but the cebiche was good enough, mixed together with the crunchy vegetables that complemented the softer seafood. 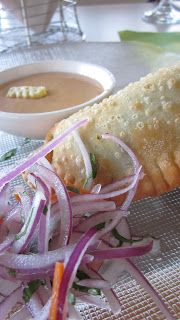 Another standout was the empanada. We got the empanada de tamalito verde, which was a deep fried turnover filled with sweet corn, cilantro, and queso fresco and topped with a salsa criolla and came with a dipping sauce of Huancaina Rocoto (a chili) sauce.

I usually prefer baked but this fried empanada wasn't too heavy. What I loved most was the flavor of the filling that was sweet with hints of cilantro, not to mention a beautiful shade of green. It was very unique in a good way.

The salsa criolla, which consists of the onions and other toppings, was ok. The huancaina rocoto sauce could have used more kick. I detect a pattern here. I think this place needs more kick. I suspect it was to accommodate "milder" palates and I strongly object! 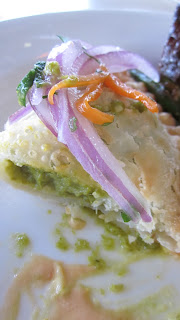 The one thing that was average to below average was the anticucho, the beef skewer that came with cubed potatoes and some other vegetables. The beef was a bit tough and overcooked and the potatoes were nothing special.

I also didn't appreciate the service, which was on the slow side and one of the servers ignored our request for more plaintain chips. I reflect that in the tip I leave.

The view was fantastic. It's right by the Ferry Building so I highly recommend you go for lunch to soak in the scenery. 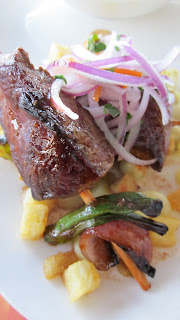 The saving grace toward the end was the dessert. The pie didn't look good so we went for the picarones, which are basically like doughnuts except they're made from squash and sweet potatoes.

WOW. I thought they'd be super heavy since they're deep fried but they weren't. They were lightly fried, if that's possible, and I really liked the hints of squash and sweet potato flavors that came through. They were so crunchy and the honey it came with was almost unnecessary. I think I had most of the bites by themselves without dipping. 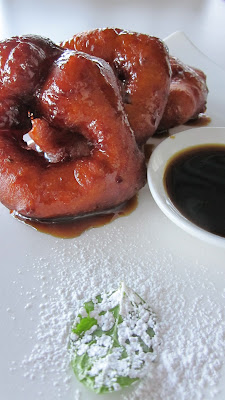 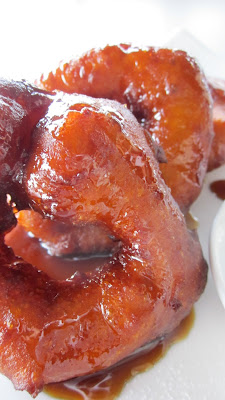 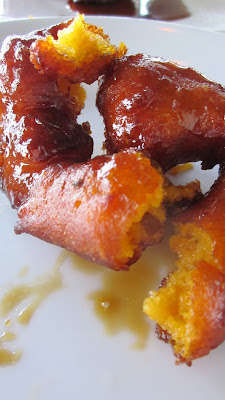