Soban in Koreatown: Raw Garlicky Marinated Crab + Rice to Soak Up the Salt 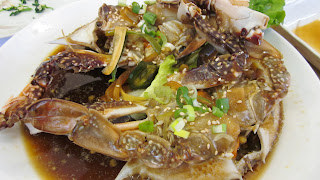 I've always been a big fan of kanjang kyejang, or raw crab marinated in garlic and soy sauce. It's a pain to eat but well worth it. I'm pretty picky about my raw crab so I hadn't had it in LA, especially after having such good versions in Korea on a recent trip. 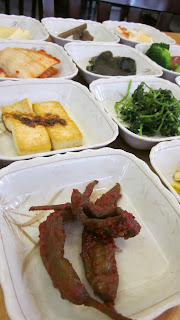 But I had heard about Soban from a fellow foodie friend who raved about it. So I checked it out and was pleasantly surprised.

Kyejang should be garlicky and meaty, with plenty of sodium to go around so you crave rice - a lot of rice. Soban's wasn't as meaty as the ones in Korea but perhaps it's unfair to compare it to the OG, so to speak. Ok, the Korean version in America was not bad. The crab was fresh and it was plenty salty.

I liked that the banchan, or side dishes, were just as plentiful. They didn't blow me away but they were, for the most part, mild, simple and complemented the strong flavors of the crab well. None of them was particularly memorable. 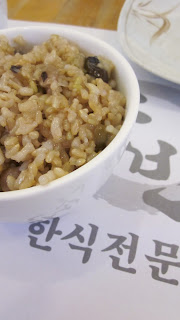 The brown rice with grains was a nice touch and we also ordered the fish soup, which was just ok. I heard some talk about the galbi jjim, or braised ribs, but frankly my dear, I've never had galbi jjim at a restaurant that was better than home-cooked ones, but I do give a damn about this dish (you're my generation if you get the reference) so I usually just make a mean one at home. 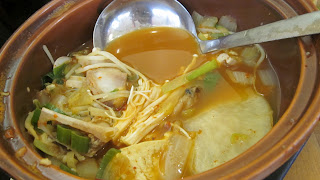 The bottom line is, go for the crab if you want to try something new or you're just a plain old crab fiend because it's definitely not cheap. 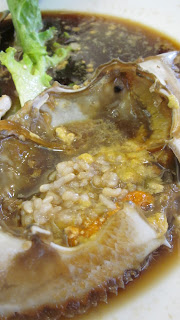 For the finale, make sure you add some of the rice onto the crab carcass and mix it in with the juices. It's probably the best part of the meal after you've totaled the fleshiest part of the crab.
Posted by ironchef442 at 11:16 PM