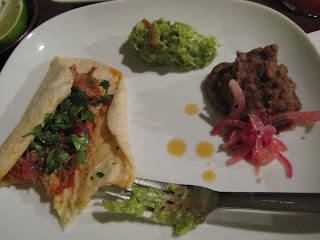 A while ago, I had the fortune of having a bunch of leftovers from lechon, prepared the Cuban way. It was tender and served with pickled red onions that gave it the tangy flavor that balanced very well with the heavier lechon.

Well, there's only so much lechon we could have solo. So I made repurposed the lechon with some fire-roasted tomatoes with green chiles, added some spices here and there, and voila -- lechon tacos were born.

I also made guacamole, where I like to add diced pieces of raw jalapenos for kick. 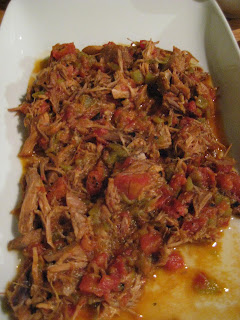 Sprinkled with some cilantro on top, these tacos were pretty darn good, if I may say so.

I liked the addition of roasted tomatoes and chiles because they tempered the strong porky smell of the lechon a bit. As much as I like pork, I don't like some of its strong aroma sometimes so it was a good match.

I also used very good hand-made corn tortillas from a Latino store near Koreatown that were so much better than the commercially available ones. It made a huge difference.

When I got sick of the tacos, I switched it up a bit and made quesadillas out of them with some shredded cheese mix of cheddar and Monterey Jack. Hard to go wrong with those.

delicious. we had a mexican fiesta here at my place not too long ago... will consider your take for the next one!

yes. i saw that. looked awesome!