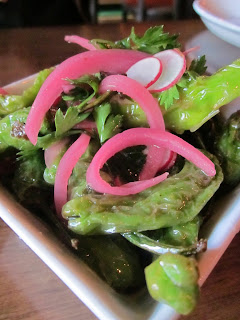 The first time I went to Lazy Ox Canteen, I wasn't in the least impressed. It was a while ago, shortly after it opened last year. I had the burger and it was pasty and not at all well executed. I wrote the place off as mediocre and not worth returning.

Then I heard all the raves about its burger at LA Weekly's 30 Burger in 30 Days series, which I didn't much agree with but noticed nonetheless. Then recently, I needed a place for a large party (8) that's relatively central and easy to find. With its extensive small plates menu, "the Ox," as it is apparently dubbed by its fans, seemed just the place. And the right occasion to give it a second chance since I'd be trying a variety of dishes. 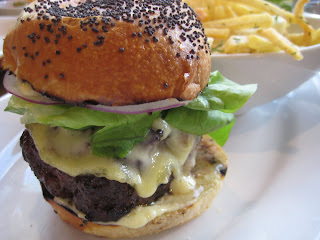 It didn't disappoint. I'm not one to be swayed by any reviews, but I must say the burger was indeed very good, no comparison to the mediocre version I had at my last visit. The patty was not at all pasty -- it had a delicious meaty flavor with some smokiness from the charred edges. I had it cooked medium (as opposed to medium rare) as I was sharing but it didn't distract from my enjoyment. It came with butter lettuce, red onions and Cantal cheese, which I later learned was a hard cheese from France. The combination worked very well. 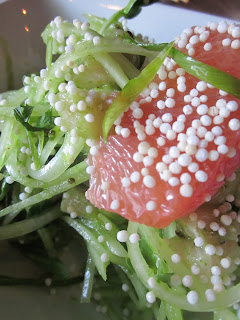 The other revelation was the yellow tail crudo. Sure, I've had sashimi pieces of hamachi before, but the way they were combined with green papaya strips, mint, scallions and a piece of grapefruit (that looks like a tomato in this photo) was pretty phenomenal. The kicker were the rice puff balls that added a crunchy texture and nuttiness to the flavor, as well as this Japanese herb mix (I think the waitress said it was furikake, which seems to be taking off these days as chefs' favorite condiment -- A-Frame's Roy Choi of Kogi truck fame uses it to make popcorn like many Hawaiians have for years and I'm going next week so stay tuned!) that includes variations of seaweed, sesame seeds, salt, dried or ground fish, sugar, among other things. It added a very distinct and refreshing dimension to what should become a staple summer dish for me. 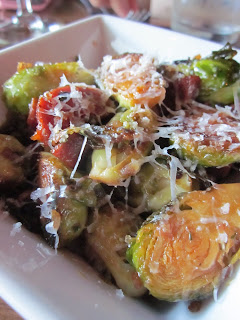 My next favorite dish was the brussels sprouts. I've always loved roasted brussels sprouts, and one of my favorite recipes is David Chang's in GQ where he adds bacon bits and sriracha sauce (can't beat that). But these came with not one but two strong contenders -- chorizo bits and parmesan (or pecorino?) cheese melted on top. Pile on the sodium, baby. And the caramelization. Probably too much to just eat all by yourself. That's why we ordered other healthier dishes to balance out this one, like grilled cabbage with piquillo peppers and almonds (which looked beautiful but was just ok) and grilled asparagus with manchego cheese, romesco sauce and peppers, which was also just ok (asparagus were a tad overcooked too). 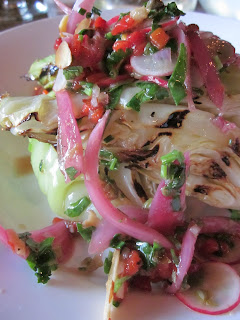 The grilled lettuce was on the bland side, even with the addition of smoky piquillo peppers, which I usually love.

A dish worth mentioning is the fried fish with some spicy aioli on the side and the cauliflower with pine nuts, mint and chile. The cauliflower was roasted and while it wasn't much to look at, the nuttiness plus refreshing mint did enhance the flavors. The chile didn't do much to spike it, though, as I could hardly taste it. 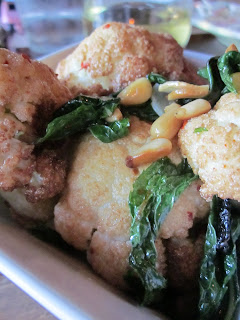 Other dishes we had included spaghetti squash cooked with a dollop of butter and a garlicky French parsley sauce called persillade.

It was a bit too buttery even for a butter-lover like me. Maybe they should try an olive oil version that's less heavy.

One of the first dishes I had after I sat down was grilled shishito peppers. They retained their gorgeous green hue with some charred sides and topped with some bright pickled red onions that made them look so picture perfect. They tasted ok, but then again, they were a bit spicy so not sure how many I could have back to back. 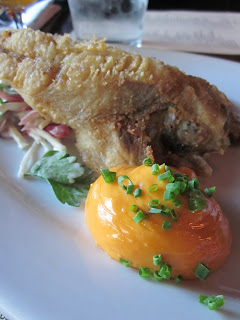 The desserts were nothing to write home about, so I won't. They were overly sweet, dense and overall unremarkable.

The service was ok but a bit harried and spotty. It got extremely loud and a bit chaotic but for a large group, not a bad place. If you're in for an intimate dinner, thi s isn't the place for you.

Parking is street parking free after 8pm and if you're like me and hate to pay for parking at the risk of parking at a shadier area, there's plenty of parking south of Third Street where it starts to get a bit less safe but hey, it's free after 6pm!

I'd love to return to try some other dishes like the grilled branzino, ribeye steak or iberico ham, although it probably won't come close to my favorite jamon iberico de bellota at the Bazaar.
Posted by ironchef442 at 12:00 AM