Lucille's Smokehouse BBQ: Ask for Newly Made Baby Back Ribs 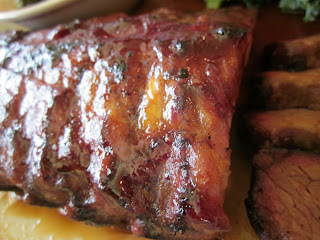 My litmus test for all barbecue joints has to be the baby back ribs. I happen to be a rib fiend, but that's besides the point. So I shared an order of the combination rib and brisket with sides of potato salad and collard greens.

I liked the ribs. They were well cooked, with just a hint of sauce. I wasn't crazy about the various BBQ sauces on the table, and after trying a few, I decided I liked the original sauce the best.

The brisket, however, was simply inedible. It was like cardboard -- dry and unappetizing. So we sent it back and asked them to give us more ribs. Curiously, the second batch of ribs were a lot better. They were more tender, warmer, and freshly charred at the edges -- as if they had just come off the grill or smoker.

The potato salad was fine, nothing special, but the collard greens were really disappointing. They were limp and tasted like they'd been stewing on the stove for days. Not good.

I really enjoyed the second batch of ribs, which is what I'll stick to next time I go there. But not sure about some of the other stuff.