Gjelina: Very Good Pork Belly, Margherita Pizza and Mushroom Toast (Read on to find out what this is) 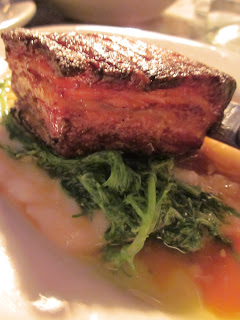 After many failed attempts at nabbing a table at Gjelina, my friend and I finally made it to this prized local gem. We're both big eaters wanting to try everything on the menu, so when it came time to order, we weren't shy. That is to say, we grossly over-ordered. "We could always take the leftovers home," we reasoned.

We duly researched what the most raved about dishes were on Yelp and adjusted to our own preferences. The verdict is that it is very good, even excellent, but a lot of the dishes were very salty, service by the model-lookalike wait staff was spotty and the noise level made us feel like we were in a stadium watching the World Cup's final match. 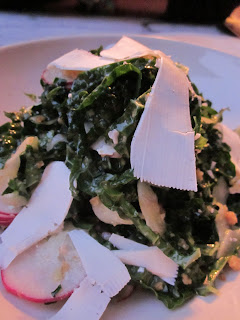 Still, the quality of the food was superb and I would return in a second, given, of course, I can get a table (They're not on Opentable, which makes it cumbersome to actually dial the number on your phone and talk to a human being).

The highlights were: Miatake mushroom toast with creme fraiche and truffle oil (which was the #1 raved-about dish online and didn't' disappoint); a refreshing kale salad (more details later); the Margherita pizza (almost as good as Mozza); grilled radicchio; and the braised (oh so soft) pork belly.

In retrospect, the only dishes that weren't as memorable were the variation on lasagna with beef cheeks and the dessert -- a black berry and chocolate bread pudding. 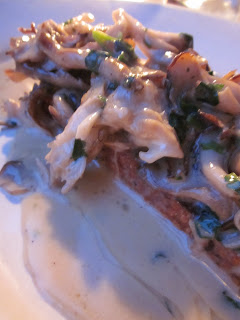 Let's go back to the dishes that were worth the trip. The mushroom toast was like a fancier and decidedly more scrumptious cousin to the lowly cream of mushroom. Ok, that may be offending the dish and the chef but I can't help it if that's my only reference. The point is, it was velvety and creamy with very strong mushroom aromas and flavors. To borrow the now-cliched phrase, it was decadently good.

I liked the kale salad (second image up top) that came with shavings of mild ricotta salata, shaved fennel, radish, lemon and bread crumbs that gave it a crunchiness along with the crunchy texture of the raw kale ribbons themselves. I'm always up for new and interesting ways of eating superfoods like kale, so this was a nice take. I've only stir fried kale with some olive oil and garlic but this one seems like a winner for the summer. 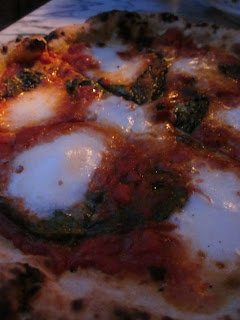 I also liked the Margherita pizza, which had an ultra-thin crust that was chewy with nicely charred edges that gave it a nice crunchiness. The tomato sauce, mozzarella and fresh basil were very good. Like someone yelped, possibly my second favorite pizza in LA after Mozza.

The pork belly. It's hard to go wrong when you have a whole layer of fat that by default is going to impart a ton of flavor and juiciness. Braise the baby for hours and you're likely to have a winner. Ok, the flavor of the pork was also pretty good. This was clearly no cheap pig (hailed from Niman Ranch). The glistening pork from the caramelization came on top of a bed of polenta, bitter greens and apple cider that gave it a tartness and sweetness at the same time. 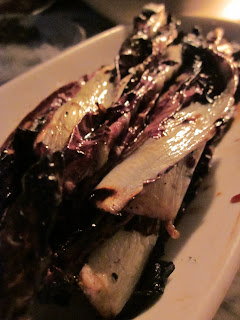 Another vegetable I don't cook much with is radicchio. I'm not a fan of the raw version, but when grilled, it takes on a whole new identity -- the bitterness becomes subdued with the smokiness from the grill. In short, wonderful.

We chose a few healthier dishes to balance out the heavy meats and stuff with creamy goodness like the mushroom toasts. Oh, did I mention that the bread used for the toast was excellent? It was like a French peasant bread of sorts that held up nicely to all that topping. 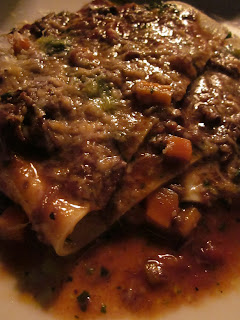 The issue with the beef cheek lasagna variation was that it had a slight unpleasant smell from the meat (maybe cheeks have a distinct smell that I wasn't aware of, perhaps like liver or tongue?). In any case, it distracted from the main flavors and while ok, I wouldn't get it again. It did, however, fare better when I repurposed it at home with a runny fried egg for breakfast. Yes, that's my go-to breakfast makeover strategy and it works most of the time. This one tasted decent and I'd venture to say even better than the original, if I may say so. 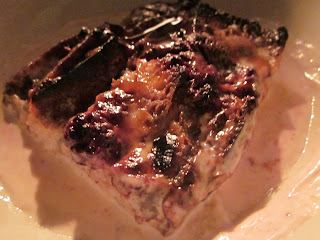 The dessert sounded promising -- black berry and chocolate bread pudding but truth be told, I think one of the reasons we couldn't fully appreciate it was that we were stuffed, even after having packed a lot of food to go. Then again, the bread pudding wasn't anything special either. At least not nearly as revelatory as the one at Tartine in San Francisco anyway.

I'd definitely like to return and try some other dishes. This place has a very extensive menu. Wasn't crazy about its by-the-glass wine selection but wish it offered BYOB. The outdoor patio was also very nice. It wasn't cold with some heat lamps and I'd imagine it's only going to get better with warmer weather.
Posted by ironchef442 at 7:14 PM