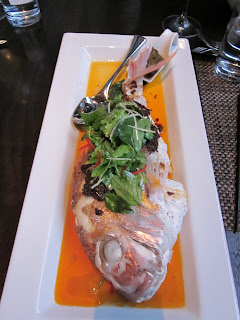 I admit I had pretty high expectations of Lukshon, the first full-fledged restaurant from Sang Yoon of My Father's Office fame. Granted, I was never a huge fan of the Office burger, rather (in)famous for its purist tendency to "politely decline" any substitutions, let alone ketchup. It's definitely above average, but not the kind of burger I crave, like that of Houston.

Anyway, overall there were some hits and a few more misses. The biggest hits were the black rice bowl and steamed sea bass-like fish with tamarind paste and so-called black bean ghee on a bed of steamed spinach. I find it annoying it doesn't have its menu on its site, presumably because it changes a lot but it should still be there. The fish was extremely tender and while I found the tamarind paste a tad too strong, once I diluted it with some of the juices, it was excellent. The cilantro and basil gave it a refreshing touch and the thinly sliced pepper strips gave it a subtle hint of heat. The sambal ijo on the side that tasted like a roasted tomatillo salsa verde didn't quite go with the fish as well but it's apparently an Indonesian staple. 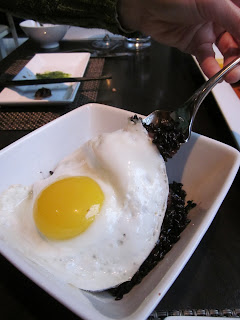 The black rice came with Chinese sausage slices, stir-fried onions, pieces of beautifully roasted whole garlic cloves and a fried egg on top. I love black rice, garlic's a no-brainer and fried egg makes anything better, so what's not to love about this dish? It was Korean-style black rice, as opposed to black wild rice found in western markets. I personally like the Korean black rice better. It's a bit stickier and a shorter grain. If you've ever had purple-hued rice in Koreatown restaurants, that's usually because the restaurant mixes a bit of black rice and the resulting color is from the dyeing of the regular white rice with a few pebbles of black rice. My only complaint was that the portion was too small.

All the other dishes were unremarkable to outright duds. 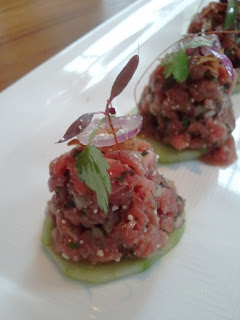 We started with the steak tartare and spicy chicken pops appetizers but they weren't anything special. The tartare placed atop a slice of pickled (although couldn't really taste it either) cucumber didn't have much flavor. I couldn't taste the chile, herbs or aromatic rice powder that were supposedly included.

It has promise but didn't deliver. He should have placed it atop a slice of Asian pear, Korean steak tartare-style called yukhoe.

As for the spicy chicken pops, it was raved about on message boards but it also disappointed. It was spicy alright, but the flavors didn't meld well together. I could get better tasting spicy chicken from Kyochon. 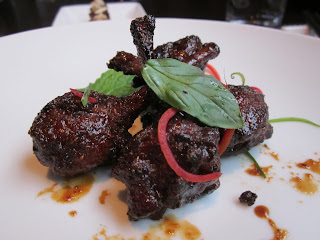 The squid looked beautiful -- its legs were deep fried and were the best part of the dish. But the rest of the Chinese sausage-stuffed squid bodies that had been seared were bad. Bottom line: the pasty texture of the sausage didn't work well and the flavor of the sausage clashed with the flavor of the squid. The mint and candlenut sauce was good but couldn't really save it. It was topped with fresh Vietnamese coriander (rau ram) leaves that were refreshing but again, couldn't save it. 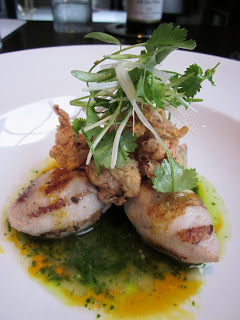 The brussels sprouts were overdone, overseasoned and oversauced. Didn't enjoy these much although I usually love them.

The foie gras' mix of sweet (dusted what looked and tasted like cocoa powder but may actually have been something else that I'll get into) and savory didn't work for me. It had a lot of fancy things in it, including carob -- often used as a substitute for chocolate -- ceylon cinammon, tamarind gastrique -- which I just learned is a syrupy reduction of vinegar or wine and sugar -- almond and puff rice. For all the detailed description and monikers, it fell flat and I usually love foie gras. The foie gras "lollipops" with cotton candy at the Bazaar were a lot more successful. 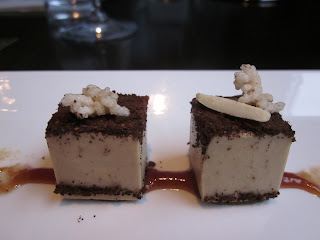 The biggest letdown, perhaps because I was excited about this dish, was the garlic pork belly with rice cakes and green cabbage. It seems to be a take on dakgalbi, a spicy Korean chicken dish prepared similarly with rice cakes and cabbage. Instead of Korean red pepper paste, he uses do ban jian, a spicy fermented broad beans and soybean-based paste often used in Szechuan cuisine. This dish had several problems. The pork belly wasn't properly seared and therefore not crunchy on the edges. Not good. Then the paste didn't work well with the pork belly and the cabbage. 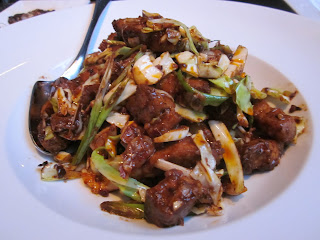 The only redeeming factor was that the rice cakes were browned and that give them a crunchiness. It's not a good sign when the only thing I could think of when I bit into it is how I should repurpose it at home since this simply won't do.

I usually like pork belly chunks that are roasted or seared so the outside is crunchy and once you bite into it, they come apart -- much like the ones at Chego, whose review is pending. 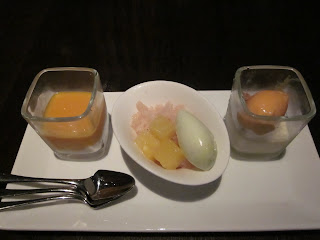 The drinks menu was good. It's heavy on the whites and given we were having a lot of spicy foods, we went for a 2007 Riesling kabinett from Mosel, that was touted as "sunshine in a glass." Although I didn't get that, it was very good and went very well with our food.

It's nice we got complimentary desserts, like everyone else. They were mango-papaya lassi and coconut tapioca, which was very good; lychee-mangosteen granita with rau ram-lime sorbet poached pineapples, which was ruined by the sorbet that didn't work; and cinnamon custard graham cracker streusel with Thai chile-sweet potato ice cream, which was ok but not fantastic. 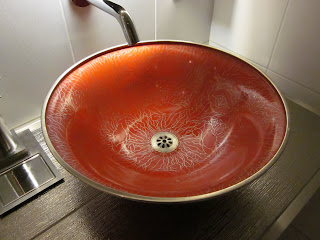 Besides the food, the decor was very well done. I loved the little Korean touches here and there. The restroom had a really nice feel to it, and my dinner mates and I all fell in love with the beautiful red sink with flowers that could be mistaken for Rose of Sharon, Korea's national flower. Coincidence? I don't think so.

Anyway, service was good and the space was pretty small but love love love the booths! Very comfy and private. 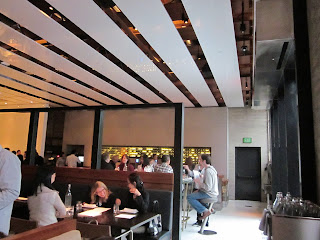 Despite the misses, I appreciate what he's doing by mixing flavors and frankly, offering a new kind of "Asian fusion" beyond the usual addition of ponzu or kimchi to western ingredients. I certainly learned a lot of new Asian sauces, pastes and condiments I wasn't as familiar with. It's tempting to think that I could drive to San Gabriel Valley and get the same steamed fish for a fraction of the price, but perhaps it's about the experience of trying mixes and matches of different foods of Asia and smelling the wonderful bouquet of a glass of Riesling and sipping away. Now that you won't get in SGV.
Posted by ironchef442 at 10:31 PM